Celebrating some of our favorite hidden treasures in the nooks and crannies of the offices at Concordia University Wisconsin. The 3rd in a series.

In the Bible, land is often given special significance. From the Garden of Eden to the Promised Land to Bethlehem, where something happens often adds deeper meaning.

That’s one reason Roy feels so connected to the Nativity set that adorns a shelf in his office. It was given to the university by members of the Kiekhaefer family, who once owned the farmland now occupied by Concordia University Wisconsin.

“You’ve heard of Mercury Marine? It used to be Kiekhaefer Mercury Marine, before it was sold to Brunswick,” Roy explains. “Ultimately, the School Sisters of Notre Dame bought the property and developed the original campus here. But the family continued to love to come back, and see what was happening here on ‘the farm.’ And we stayed in contact with them after Concordia acquired it. They loved to visit and see all the improvements that Concordia was making.”

As time marched on, family members inevitably began to pass away. After one of the daughters died, the family requested that her funeral be held on campus, in the Chapel of Christ Triumphant. Roy was asked to officiate.

“After the funeral, the family did a number of things to thank the university,” Roy says. “One was to give us this Nativity set, made of olive wood from the Mount of Olives in Israel. One of the daughters loved visiting the Holy Land, and brought this set back with her and gave it to us.

“We were in Israel once as part of a Concordia trip years ago, and I saw a lot of different olive wood Nativity sets,” Roy adds. “But frankly I’ve never seen one this large. It’s very nice.”

It’s also nice, during this Christmas season, to reflect on the set as a symbol of how blessed we are to have this land God has provided—and how everything we do is in service to our Savior, that little baby in the manger.

Blessings in a Binding 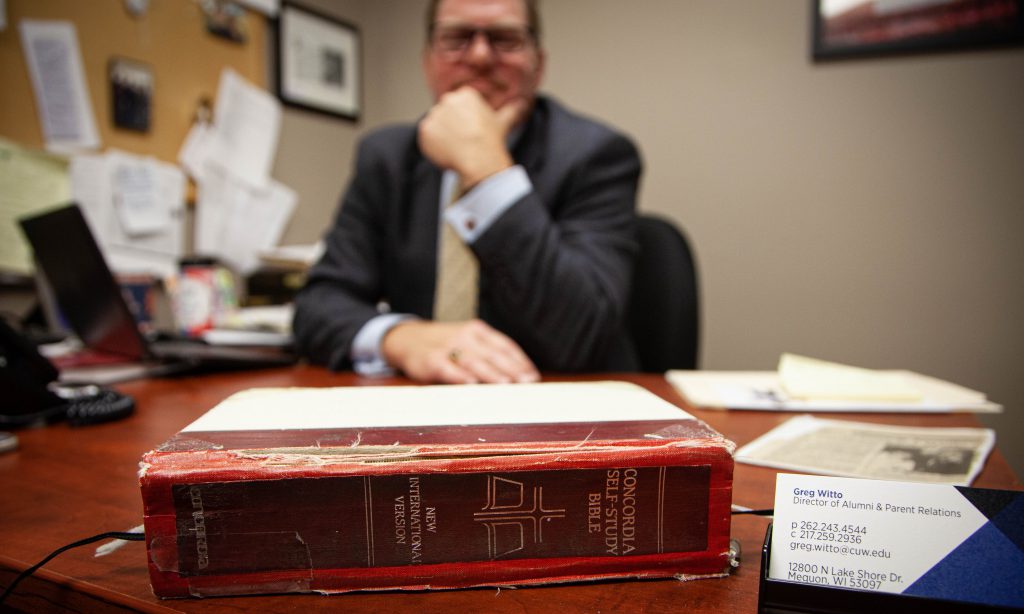 When you’ve had a Bible for 30 years, it becomes more than just the Word of God. It becomes a history of your walk with God, a treasure trove of notes, mementos, and memories. So when Greg Witto, CUW’s director of alumni and parent relations, noticed about 10 years ago that his cherished Bible was starting to fall apart, he asked the librarian at Eastern Illinois University, where he worked in campus ministry at the time, to help.

“I knew they did a lot of rebinding, and she said she could take care of it for me, no problem,” Greg recalls. “But after I gave it to her she called and said, ‘Hey, Greg, I want to talk to you a little bit about how binding works. What we do is we slice off the inside edge of the pages and then rebind it. And if we do that, you would lose a lot of the notes you have on the inside margins.”

And Greg has a lot of writing in his Bible! It includes class notes he took during his time as an undergrad at Concordia University Ann Arbor, scribblings from Bible studies he has both led and attended, and other jottings from personal prayer and study sessions.

So instead of shearing off the spine of his Good Book, Greg asked her to patch it up the best she could (you can see the red tape she used in the photo above)­ without trimming away any valuable insights or precious memories. Today, the Bible still shows its age, but the important things are intact. These include not just the notes but also a laminated newspaper clipping of his wedding announcement and the tattered remains of a bookmark given to him long ago by a special student.

“I’m so very thankful that she didn’t just say, ‘I’m going to make this a pretty-looking book!’” Greg reflects. “She recognized that there were a lot of memories in there and gave me a call. I’m grateful to her for that—and I’m sure God’s hand was in on that, too.” 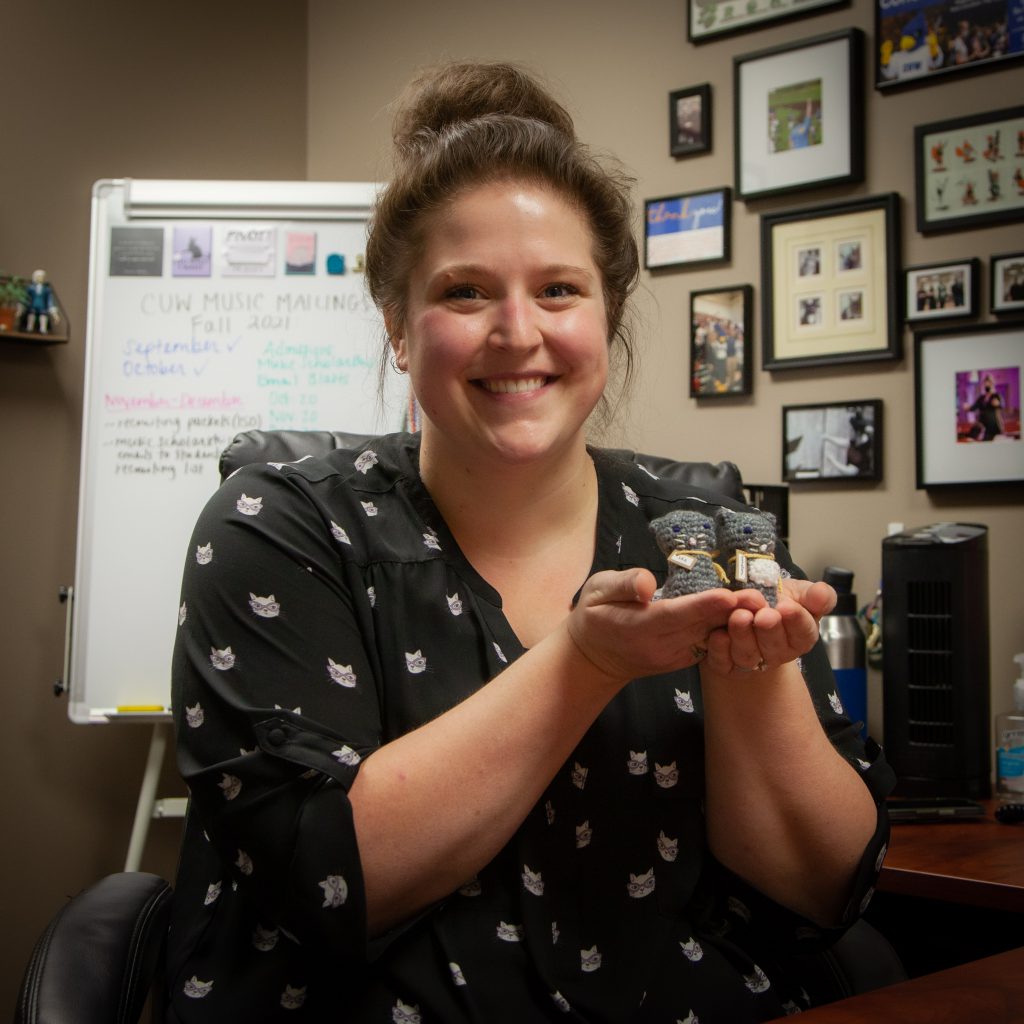 This story isn’t really about cats. It’s about a teacher using a personal interest to make a connection with her students.

“I definitely have always loved cats,” Johanna says. “When I got married, my birthday present that year was our cat, Winston. Then we got a second cat, Leo. So when I became a teacher, I would talk about our cats a lot. And my students know my cats, because I talk about them and I do silly, weird cat things.”

It’s also about how that connection can really take root and manifest itself in generous and unexpected ways.

“Last year one of my students, Sarah Jocham, a flute player, started a small business making all sorts of crocheted things. I was talking to her about it, and I asked her offhandedly, ‘Have you ever made cats?’ And she said that no, she hadn’t. And then, a few weeks later, she came up to me and just casually handed me these little crocheted gray cats!

Because it’s not just about a teacher connecting with a student. It’s about the student using that connection to make a lasting impact on the teacher.

What can non-degree coursework do for you?
previous story
Earn your accelerated bachelor's in secondary education
next story