Celebrating some of our favorite hidden treasures in the nooks and crannies of the offices at Concordia University Wisconsin. The 1st in a series.

Most everyone who works at CUW has a few special items in their office. Sometimes, the most meaningful things have the most interesting stories behind them. Here are just a few we’ve discovered (so far) … 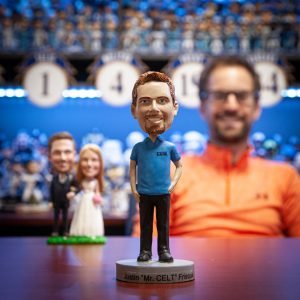 Head of the Class

When you have 966 bobblehead figures in your (small) office, it might be hard to pick just one as the most meaningful. For Frisque, it wasn’t that difficult to narrow it down to two. And ultimately one.

One figure is a custom creation depicting him and his wife, Brittany, on their wedding day. The other is also one of a kind, showing Justin himself.

“This one of my wife, Brittany [née Hundertmark (’10)], and me on our wedding day has a lot of meaning,” Frisque explained. “People ask if it was the topper on our wedding cake—no, it wasn’t that! But I did use it to announce the birth of our first child: ‘Adding another one to the collection.’

“But I had that one made myself. So, if I have to choose just one, I’ll choose the one of just me because it was a gift from two of my coworkers at the time, Sean Young and Michael Zill. They had a student worker take a bunch of photos of me, saying it was for an art project. But really it was to send to the company to have this bobblehead made.”

It really is a tremendous likeness. And while others in his collection certainly are worth more money, when it comes to sentimental value, the “self-portrait” stands head and shoulders above the rest. 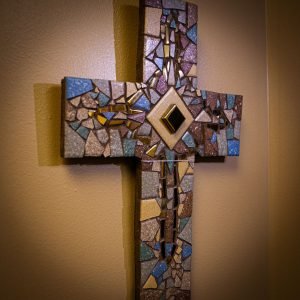 A cross on the wall is a meaningful symbol all by itself: a reminder of the loving sacrifice Jesus made for all of us. But sometimes, it can mean much more than that.

“This cross was a Father’s Day gift from my twin sons, Andrew and Christopher, a few years ago,” Wahl said. “It’s made from broken tiles from the Concordia floor, designed by an artist friend of Andrew’s.”

Andrew (’15), who now works as manager of AV services at Concordia, was a student living in the Wittenberg Residence Hall at the time. He got the idea watching floor tiles being repaired near the dorm. He asked if he could have some of the broken pieces, and a completely unique gift idea was born.

“To have this symbol in my office, a cross, as a reminder of Jesus, but then also to have the floor tiles as a reminder of the place where I work, and where my son now works …. It’s a very meaningful gift from both my sons, and something I’ll treasure forever.” 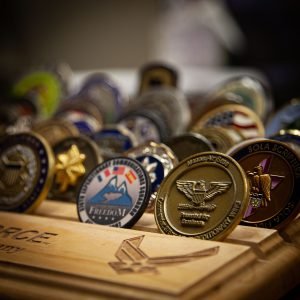 Rev. Dr. Kurt Taylor, associate professor of theology and director of the DCM

In military circles, a “challenge coin” can be used in different ways, from a straight-up collector’s item to a way to wrangle a free drink from a fellow service member. As a 22-year veteran of the Air National Guard, Taylor has accrued quite a collection. But one in particular holds extra-special meaning.

“When I was deployed to Manas Air Base in Kyrgyzstan, just north of Afghanistan, I was made head chaplain under unusual circumstances,” Taylor explained. “I’m Air National Guard, and usually the head chaplain is active-duty, not a reserve. But because the active-duty chaplain was lower in rank, that meant I would be the head chaplain. Our commander, Colonel Smith, did not think I could do the job, and he let me know it!”

But those are the rules, and the colonel had to follow them whether he liked it or not. And by the time Taylor’s deployment was over, his commanding officer had completely changed his tune.

“Colonel Smith and I could not have gotten along better,” Taylor said. “By the time I left, he was calling me into his office to pray for his wife’s surgery, and that sort of thing. At the end of the deployment, he gave me his coin, which is something he rarely does.

“I have coins in my collection from three- and four-star generals—even from the Joint Chiefs of Staff,” he explained. “This is a coin from a colonel, but it matters the most. He was sure that I wasn’t going to be able to do a good job, and I was able to convince him otherwise. It means a lot.”