Celebrating some of our favorite hidden treasures in the nooks and crannies of the offices at Concordia University Wisconsin. Second in a series.

Most everyone who works at CUW has a few special items in their office. Sometimes, the most meaningful things have the most interesting stories behind them. Here are just a few we’ve discovered so far. (Click HERE to see Part 1.) 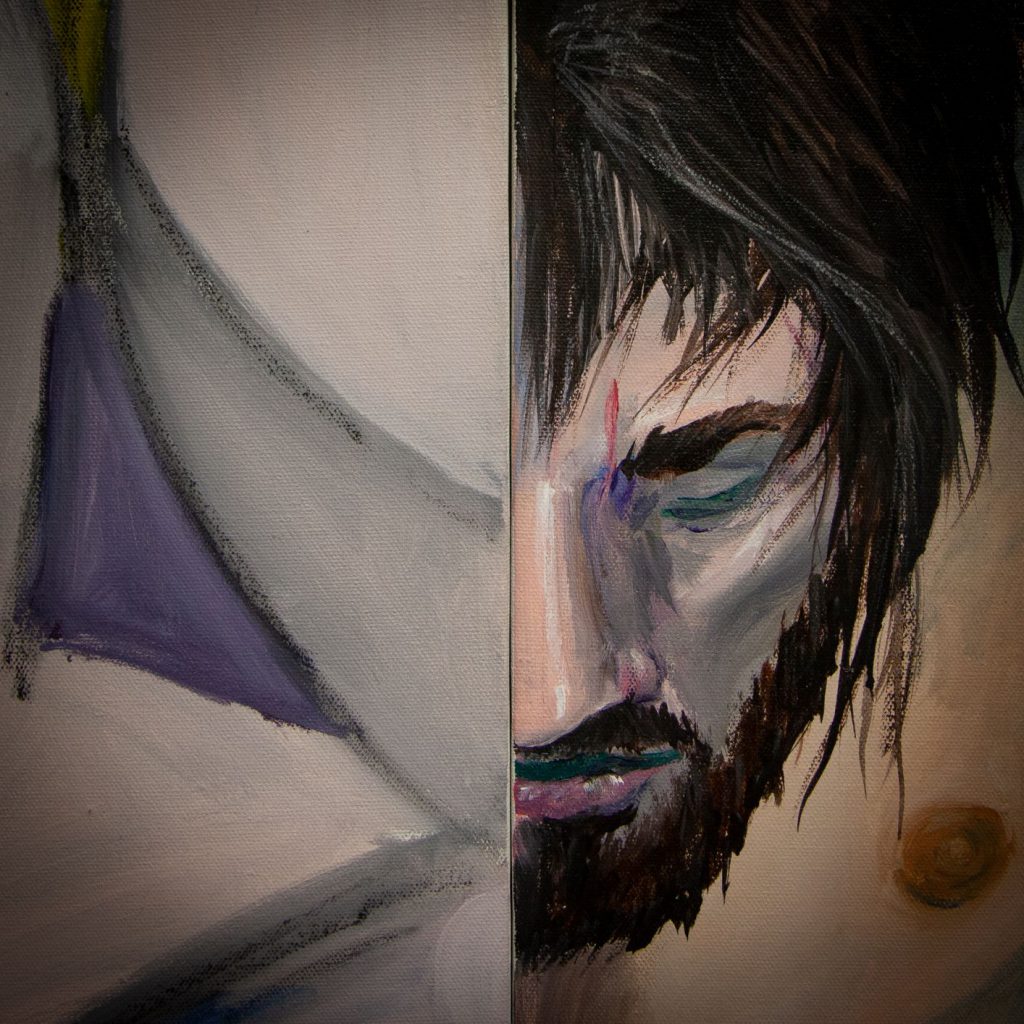 Tearing the Curtain. Opening the Door.

As hidden treasures go, this one is actually quite conspicuous. It grabs your attention the moment you walk into the office of Brad Alles. The painting, which takes up most of the back wall, is spectacular. The story behind it is profound.

“I was a double major in art and theology,” Alles explained. “I’ve always loved art and painting, and I’ve always loved reading the Bible, and finding out what God’s done. He made us and then he saved us. To be able to express that in a painting is something that I tried to do here.”

On the right side we see Jesus as true man, painted realistically. On the left is Christ as true God, painted abstractly. “Because how do you paint God?” Alles explained. “You can’t. God is spirit.”

The work is inspired by Hebrews 10:19-20, which says, “… we have confidence to enter the Most Holy Place by the blood of Jesus, by a new and living way opened for us through the curtain, that is, his body …” (NIV).

“The bible tells us that when Jesus died on the cross, the temple’s curtain tore, and so I painted him tearing the curtain of sin,” Alles said. “The purple shows the sin of the world; the yellow represents the gold of Heaven.”

Over the years, Alles has hung the painting either in a classroom or his office. The idea is to open the door to a theological discussion with students, parents, or anybody else who might be curious. It’s just one more way he is using his gifts to reach people for Christ. 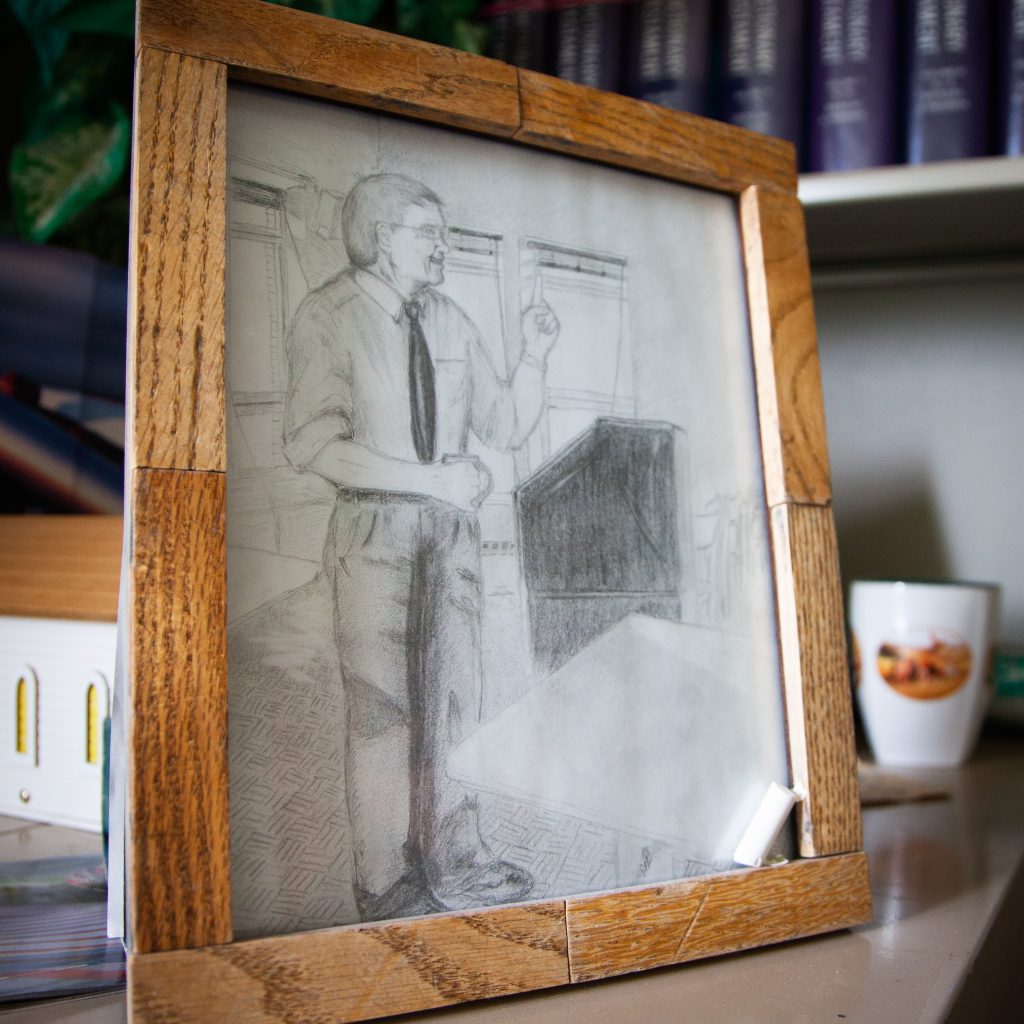 Sketching the End of an Era

Before our beautiful Terrace Room was “The Terrace Room,” it was just an ordinary classroom, commonly known as Albrecht 113. But it was still special because it’s where one of our favorite, longest-serving professors taught many, many classes.

“I taught virtually all of my classes there from when I started in 1996 until 2012, when it became the Terrace Room,” Paavola said. “It’s big, but it was not an ideal classroom. And the only audio-visual aid we had was a chalkboard.”

After Paavola announced that the room was to be remodeled and repurposed, one student, Sarah Ludwig (now Newton), started sketching. Later, she gave the picture she drew to Dr. Paavola. The letter she included tells the story:

The morning you told our Gospel of Mark class that we’d be the last you would teach in Albrecht 113, I felt the need to preserve it all – the memories, teaching, laughter, tears, joy – somehow. So I started sketching on the back of our Bible Study packet & taking “notes” in addition to the regular notes for class, and this sketch was the end result.

The frame has its own story, she wrote. It’s made out of tiles from the room’s distinctive parquet floor, which was removed for the remodel. She also included a piece of chalk with the framed drawing. Her letter continues:

Putting this together helped me to say goodbye to the room, & ultimately to affirm the fact that it’s the people, & the things that were taught & remembered, & the friendships made that matter most. When I dropped by to talk last, we talked about moments & memories. I hope I was able to preserve some of yours in a visual way.

“Sarah is very talented, and very generous, and she completely surprised me when she gave me the picture,” Paavola said. “I had no idea that’s what she was working on, I thought she was just taking notes!

“What a wonderful person she is. I’m proud to have this memento of a special time, and we can all be very proud to have alumni like Sarah.” 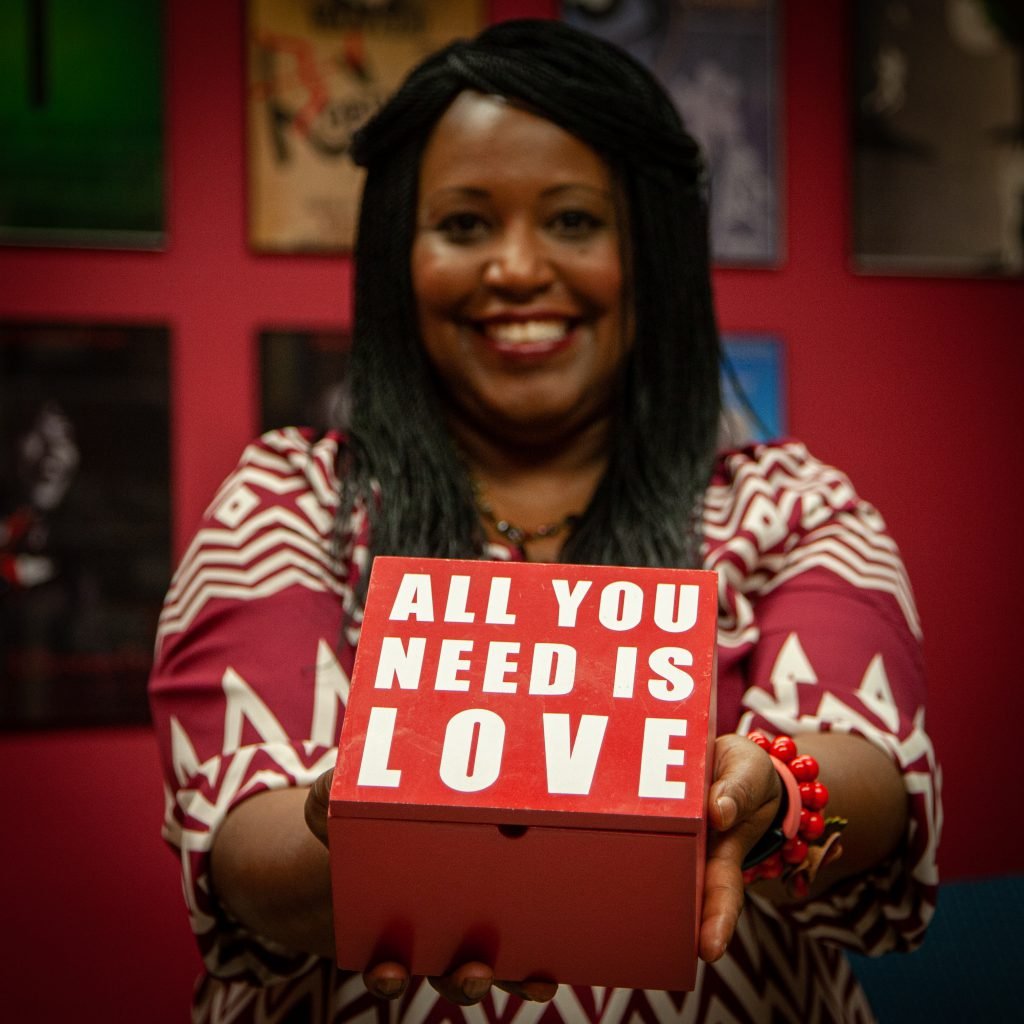 ‘And then God takes it from there’

Every play, every musical, every production has its moments and memories. But some productions leave an indelible mark on everyone’s hearts. For Lori Woodall and the Concordia Players, the 2015 production of Godspell was one such event.

“When we do a play, I always tell my students that there’s only so much we can do, as director, cast, and crew, to make it work,” Woodall explained. “And then God takes it from there and does something that you never even imagined. That’s exactly happened with this play.”

Working on Godspell, which tells the story of Christ and the crucifixion, elicited deeply emotional and spiritual reactions from the cast and crew. Everyone bonded in a way that went beyond the level you’d typically expect.

“Something very profoundly spiritual happened,” Woodall said. “We’d have this thing called blanket time, where we’d all sit around and talk about spiritual things. It was just a pure feeling of closeness with God, with one another. It got to the point where, during the last performance, there were tears flowing on stage before they even got to the end of the last song. They all said they didn’t want it to end.”

Later, the cast and crew gifted Woodall with a little red box filled with affirmations and notes of appreciation. Ever since, she has used the box as a vessel for students to pass notes of encouragement to one another during production runs.

“As a performer, you make yourself so vulnerable,” Woodall said. “And for students, who are balancing their theater work with school work and so many other things, there are always moments when you can just use some affirmation.

“Sometimes it goes beyond the box,” she added. “They’ll send little notes to each other, or post things backstage to encourage each other. But it all started with that show, and that’s why it will always have a very special place in my heart.”

Registration for 2021 Literacy Institute extended to July 15
previous story
QUIZ: Which major should you choose?
next story