The uncommon social work grad preparing to pay it forward

Meet Rhiannon Mueller ('22), a social work student with her sights set on earning her master's and eventually giving back to students in the same way she was supported at CUW.

Editor’s note: This is one in a series of stories highlighting a few Concordia’s uncommon May 2022 graduates. Faculty and staff submit candidates for consideration. Stories are posted in the days leading up to commencement. View more uncommon graduates here.

When she found out she had ADHD in June 2021, Rhiannon Mueller knew that the diagnosis was an opportunity to give back to those who struggle in the same way she does.

The West Allis native never had trouble in school, so she never had a reason to wonder if her brain worked differently from her classmates. In fact, she was always considered a gifted student. When Mueller started high school, she transferred from the small St. Paul’s Lutheran to the much larger West Allis Central High School, and the transition brought on lots of anxiety. As the weight of the shift to a new school began to feel unbearable, her school counselors stepped in to support her.

Though many of the issues plaguing her were alleviated, she did not know the root cause of her anxiety and her tendency to hyper-focus on random tasks. Because of all the help she received from her school counselors, she dove into psychology and planned to pursue counseling after high school.

Mueller grew up attending S.H.A.L.O.M. Ministries in Milwaukee. As a church body, they are committed to serving “the homeless, helpless, and downtrodden.” By regularly volunteering at homeless shelters and food pantries, Mueller was instilled with the importance of a servant heart from a young age. It was through these experiences that she developed an outreach-centered worldview.

After benefitting from the support of her school counselors, she knew she wanted to pursue a helping profession in order to pay it forward. While she was initially interested in psychology, she diverted to social work because of the flexibility it offered.

Pursuing a helping profession was natural for her. Early in life, she had been taught how to use her gifts to bless others. Even before any inkling of Attention Deficit Hyperactivity Disorder entered Mueller’s mind, she was ready to commit her life to supporting others.

When the pandemic hit in 2020, Mueller had no idea how deeply it would affect her. She began to struggle in school, an alien experience for her, and was quickly burnt out on assignments and tests. After seeing a multitude of videos about ADHD on TikTok, the social work major dove into researching the disorder thinking she may have found the source of her symptoms. Because ADHD runs in her family, she pursued an official diagnosis.

She began the diagnosis process in January of 2020 and didn’t receive an official diagnosis until June of 2021. The waiting process was especially difficult for her.

“I had imposter syndrome for sure,” Mueller said. “It’s just so hard not to wonder if you’re making up your symptoms and feel like your condition isn’t really that bad.”

Attention Deficit Hyperactivity Disorder can affect anyone at any age. The stigma of this disorder being a “little boy’s disease” often holds people back from getting tested. It manifests uniquely in each person. For Mueller, her brain is hyperactively anxious and inattentive towards things like homework. This often caused her to feel “ADHD paralysis,” getting stuck on one activity for long periods of time while ignoring more important responsibilities. The symptoms of ADHD are all common experiences, by when those symptoms occur at a frequency that disrupt daily life, action can be taken to alleviate them.

After receiving a diagnosis, many things became clear for Mueller. The reason she couldn’t focus and struggled to motivate herself were not caused by laziness. This prompted a period of grieving and healing.

When she returned to campus for the 2021-2022 school year, Mueller sought out the Academic Resource Center to get accommodations for her classes.  Mueller had a drastically better school experience because of these accommodations, all of which were kept private from her classmates. She raved about the support she received from the ARC: 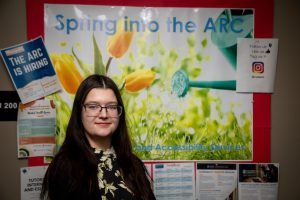 “It was just a fantastic experience. My anxiety is at an all-time low because things are easier to get done.”

Now she wants to pay it forward and return to the academic advising setting for her career.

“I know what it’s like to be without accommodation services and a diagnosis,” she said. “I want to pay forward for all the support I’ve been blessed with.”

Mueller is currently an intern at Granville Lutheran in Milwaukee working with pre-k through eighth grade students. While she loves helping these kids, her ultimate goal is to work in a college setting.

Her experience in the social work program here at CUW has also had a big impact on the senior. “From the start with my first intro to social work class, my professors helped me to process and overcome biases I didn’t even realize I had.”

Dr. Sarah Collins, the professor of that class, is now the master’s in social work director. Mueller looks forward to continuing her education under Collins’ direction.

Social work is a highly versatile career. Mueller described it as the “glue” of helping professions.

Mueller understood the flexibility of her degree long before she would use that flexibility to serve as an “inter-professional professional.” She wants to help students to achieve their potential, no matter their learning abilities.

To anyone wondering if they have a disorder such as ADHD, Mueller encourages research and pursing a diagnosis if possible. There is ample support online, “You can feel like there are other people out there like you,” she said.

Concordia’s social work program is answering the call for the increased need in the field.