Editor’s note: This is one in a series of stories highlighting a few Concordia’s uncommon May 2022 graduates. Faculty and staff submit candidates for consideration. Stories are posted in the days leading up to commencement. View more uncommon graduates here.

In many ways, Mollie Hittinger has spent her life following in her mother’s footsteps. And happily, so, because if you ask Mollie, she will readily tell you there are few people in the world she admires more than her mother, Catherine “Kit” Hittinger. 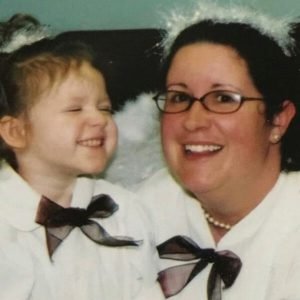 Like Kit, Mollie’s second home growing up was the school buildings where her mother served, first as a teacher, and, when Mollie reached second grade, as a principal. Both women were born into families filled with models of exemplary Lutheran educators, and each knew early on that they would someday become a teacher too.

Mollie says the call to become a Lutheran school teacher was placed on her heart already in second grade. For Kit, it was third grade. Both demonstrated their love of teaching in overt ways after that. For the Hittinger women, hanging bulletin boards or helping others grade papers was never seen as a tedious task, but as an early fulfillment of their future vocations.

Another similarity: Both women are west-coast girls through and through. Kit has spent her entire life and 33-year career at Lutheran or Christian schools in California. She currently serves as principal of Lutheran High School in La Verne. Her college choices, likewise, kept her in the Golden State. She earned her master’s degree from California State University Northridge and her undergraduate degree came from California State Polytechnic University Pomona (Cal Poly Pomona), where she met her husband. Cal Poly Pomona, in particular, holds a special place in Kit’s heart, and, for many years, Mollie thought she would follow suit there as well.

One visit to Concordia University Wisconsin, however, and Mollie’s years-long conviction about Cal Poly quickly wavered.

“In 2016, my dad and I went to the LCMS National Convention in Milwaukee and Concordia hosted a meal for attendees on campus,” Mollie explained. “We got off the bus and I immediately had that feeling of ‘Oh, I could go here.’”

Despite her intrigue, Mollie wasn’t ready to immediately commit to the far-from-home, cold-weathered campus. Still, she applied, engaged in a phone conversation with Secondary Education Chair Dr. Adam Paape, and then opted to fly to campus a few weeks later for a proper Visit Day experience.

Although she and Paape had never met in person, Paape immediately recognized her.

“He said to me, ‘You’re Mollie from California. I’ve been praying for you that you would come here,’” Mollie recalled. “It just immediately solidified for me in that moment that this school was part of God’s plan for me.”

The exchange served to calm her onlooking mother’s fears as well. For both Hittinger women, it was confirmation from the Lord that Mollie had found her place.

“It made me feel like, ‘Okay, she’s home,’” Kit said. “The fact that the department chair knew her name, it helped me feel like people would know her and take care of her at Concordia.”

Not long after, Kit switched up the longtime tradition of mom setting the precedent by choosing to enroll at CUW herself.

This weekend, mother and daughter will cross the CUW commencement stage to earn their respective degrees. Mollie will graduate with a Bachelor of Arts in Secondary Mathematics Education and a Lutheran Teacher Diploma. Kit will join Friday’s graduate commencement ceremonies to celebrate the completion of her Doctor of Education in Leadership in Innovation and Continuous Improvement (EdD LICI).

As with Mollie, it only took one look at CUW to pique Kit’s interest. Kit had been researching doctoral options for a few years but hadn’t found the right fit among her California school selections. While on CUW’s campus for Move-In Day Mollie’s freshman year, Kit saw an advertisement for the EdD LICI program. Its flexibility, well-balanced approach to multiple areas of study, and in-person residency component presented the complete package in Kit’s mind.

The fact that she’d get to graduate with her daughter was icing on the cake.

Earning a doctoral degree proved to be a significant feat. On top of the rigorous course schedule, Kit’s mom was diagnosed with cancer a little over a year into the program. Kit, ever the hard-working, humble servant, had to stretch herself by learning to ask for help.

“My parents are some of the most generous people that I’ve ever seen in my life,” Mollie said. “This situation forced my mom to ask for help, and I thought it showed growth for her that she was actually able to do that. But it was also cool to see how readily available people were to her. People she had helped for so many years before jumped at the chance to pitch in because they love her.”

Of course, Kit’s family members stepped up to help as well. It’s often a family affair where the Hittingers are concerned. 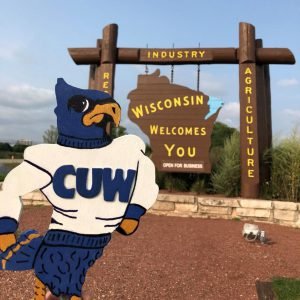 That’s how it was four years ago when it came time for Mollie to make her way from California to Mequon to start her collegiate experience. The Hittingers rented a 12-passenger van and spent five days road-tripping across the country. A wood-working enthusiast, “Papa” (i.e. Kit’s father, John Tripp) made commemorative Freddy the Falcon wooden cutouts for everyone. As they passed through each state, the Hittingers catalogued Freddy’s journey – ala the popular children’s book Flat Stanley – with photos by road signs or landmarks.

Many of the road warriors will again make their way to the Midwest for commencement, this time via airplane. In fact, it will be the first time since 1953 that 91-year-old Papa will board a plane.

One notable absence, however, will be Kit’s mom, who tragically lost her battle to cancer in March.

“She was probably the most excited to see us graduate together,” Mollie said. “It was all she talked about. So that part is bittersweet. She’ll be watching us though.”

Returning to the west

Following commencement, Mollie will make a move to Las Vegas, Nevada, where she has received a call to teach middle school math at Faith Lutheran Middle and High School, the largest Lutheran school in the nation.

One of her main desires following graduation was to serve in the LCMS Pacific Southwest District so she could live somewhat close to home. It’s yet another way the Lord has shown His faithfulness to her.

Soon, like her mother, she’ll begin to carry on the legacy of Lutheran educators.

“I was constantly surrounded by good educators growing up,” Mollie said. “It’s just always been something that I wanted to do. The world of education, in general, energizes me, and the fact that God is in all of it is so exciting. I’m just thrilled to soon be part of a school community in a new way.”

Concordia offers a variety of degrees in education at the bachelor’s, master’s, and doctoral level.

Learn more about the Hittingers’ programs: