The uncommon researcher whose accomplishments are no small feat

In fact, in Jack Terry’s experience, the opposite proved true for his collegiate experience, at least in part. Time and again, Concordia University Wisconsin’s small class sizes and easy access to professors, research opportunities, and other extra-curriculars paid off in dividends for the Greendale native.

“I feel like CUW strikes the exact right balance,” Terry says. “The opportunities that are available here are crazy compared to other schools. It hasn’t been particularly hard for me to get involved in research and other professional growth opportunities while at Concordia, and if I were at a Big 10 school, I know that I wouldn’t have been able to do it all.”

This Saturday, after four years of soaking up as many CUW perks as possible, Terry will cross Concordia’s commencement stage, signifying the completion of his Bachelor of Science in Biochemistry degree. He’s one of nearly 1,000 individuals to earn an undergraduate or graduate degree from Concordia this spring.

Lab time, and then some

For Terry, his choice to forego a Big 10 school for his undergraduate experience didn’t mean he had to sacrifice future opportunities. He has been accepted into the University of Kansas’s prestigious Department of Pharmaceutical Chemistry. In less than three weeks, he’ll make the trek south to sign a lease for his new apartment, his first time claiming an out-of-state mailing address.

Terry, who graduates with high honors and earned this year’s CUW Science Award for superior achievement in Physical Sciences, landed a coveted Val Stella Fellowship to attend the University of Kansas. The KU pharmaceutical chemistry department extends the fellowship to a single applicant each year, providing the candidate with $25,000 annually to study and grow as part of the KU team. Furthermore, Terry’s fellowship is supported by the biopharmaceutical company Gilead Sciences, which means he has autonomy to join a lab of his choosing. 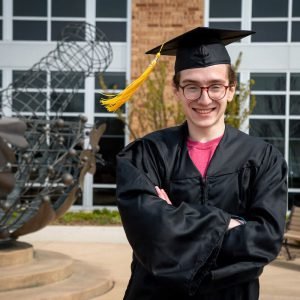 “I was fortunate enough to be offered two different fellowships throughout my application process to various schools,” Terry says. “I attribute this to the recommendation and extremely helpful guidance of Dr. [Christopher] Cunningham.”

Cunningham, an associate professor of pharmaceutical and administrative sciences at CUW, gave Terry much more than just a glowing recommendation, he gave him a spot in his lab. Terry has spent the last two years contributing to Cunningham’s neuroscience research by investigating the process to synthesize endocannabinoid transport inhibitors in the hopes of one day developing a therapy with fewer side effects to treat stress-related mental diseases.

Prior to joining Cunningham’s team, Terry made his collegiate research debut with Dr. Jon Barnett, associate professor of chemistry. Barnett put Concordia’s low student-to-teacher ratio to work when he spotted Terry’s potential during class and extended a personal invitation for Terry to join his research effort.

In total, Terry has accrued 12 credits’ worth of undergraduate research, an impressive amount for any college student. And Terry recognizes its value.

“During my grad school interviews, I’d talk with some of the other applicants and they’d share how difficult it was for them to get lab time or research opportunities,” Terry notes. “They’d email several different profs in the hopes of possibly getting a chance at admittance, and I pretty much had my pick of great opportunity after great opportunity.”

At an exploratory pace

His research opportunities ultimately pointed him in the direction of his future career. Terry first enrolled at Concordia with the intention of becoming a pharmacist, but his years of work as a pharmacy technician at Walgreens taught him that retail pharmacy wasn’t his sweet spot.

Instead, Terry discovered that his interests lie in discovery.

“The idea of doing research that could affect the way we treat any kind of disease state is rewarding,” Terry said. “There’s the realization that I could be involved at the ground level of a treatment we’ve never had before.”

This past year’s pandemic shed some light on an otherwise overlooked discipline, Terry says. As researchers scrambled to develop an effective vaccine for the coronavirus, the world at large got a glimpse of the elaborate process behind chemical investigation.

“We take for granted the years and years of work that scientists are putting in to develop these drugs,” Terry says. “It’s a very underappreciated part of our society, so to be involved in some of the insane strides that science can take over just a five- or 10-year period is just really exciting to me.”

Perhaps the world’s next great discovery will be owed to Terry and his KU colleagues. After all, sometimes big impact begins with a small team of people. Concordia can certainly vouch for that.