Physician Assistant professor Michael Toppe had a vision to transform a 30-month Peace Corps stint in Niger 20 years ago into a partnership with Christian, medical outreach groups in Africa and South Africa.

Forward 20 years and his vision has become a reality. Toppe, MS, PA-C, vividly recalls the bush of Niger in 2000, where his tiny village of 500 people had only donkeys and oxen carts for transportation, the men farmed millet in sandy fields, and women fetched water from deep wells. “I awoke one morning to the sound of a giraffe eating one of the acacia trees just outside the village. It was easy to hear because the temperature rarely dips below 100 degrees even at night, so you sleep outside under a mosquito net,” noted Toppe. 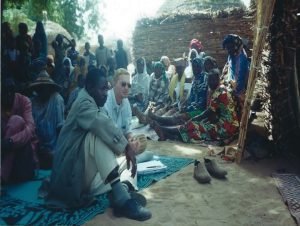 It was that initial volunteer experience that led him to return to South Africa eight years later with his PA degree to work for the U.S. Department of State as a medical officer for three years. He and his wife, Carol, a fellow Peace Corps volunteer, began raising their three children before returning to America in 2014. “I came to realize that God had not placed me in those circumstances only for my own purposes, and I became involved as a volunteer with Kingdom Workers, a United States-based, Lutheran organization that partners with churches all over the world.”

In 2016, Toppe also connected with Christian Outreach For Africa (COFA) where he today serves on the board of directors, determined to start a medical rotation in South Africa for PA students at the Pretoria School of Medicine. Another member serving on that six-member board is Rev. David P.E. Maier, president of the Michigan District of The Lutheran Church-Missouri Synod and an alumnus of Concordia University Ann Arbors’s first four-year class.

Toppe is proud there are 14 South African physician assistant rotation “alumni,” with eight more swelling that total if they’re allowed to travel next February. South Africa is currently under a lockdown until August, and while a Level 4 international travel ban complicates matters even further, Toppe admits the economic impact in that country has been even more damaging.

Concordia’s year-round Master of Science physician assistant program that began in 2014 spans 26 months and requires students to complete eleven, one-month rotations, two of which can be international excursions. “I will be sad if those students are unable to have this experience,” said Toppe, “although I recently reached out to all of them and they’re still interested.” Normally, he would be accompanying four students on a rotation, the first of which took place in 2016.

“It’s been challenging to compete with larger programs within 90 miles, so we have to play to our strengths,” admitted Toppe, an assistant professor. “We used a focus group to query potential students and one of the components that set us apart from other universities were these international rotations.”

While Toppe, 45, had to celebrate his 20-year Peace Corps reunion via Zoom a few weeks ago, he remains cautiously optimistic about accompanying eight physician assistant students to South Africa in 2021.

Maximizing your college experience (and your budget)
previous story
Summer studies: The best ways to connect virtually with friends for homework help
next story