A Concordia alumnus is leaving her mark on two of the state’s biggest events of the year.

Taylor (Oestreich) Fischer, who graduated from CUW in 2020 with a degree in illustration, was contracted by The Specialized Marketing Group Inc. (TSMGI) to design some of the official merchandise for the Wisconsin State Fair, as well as the headlining t-shirt for Summerfest. TSMGI holds the design bid for both events.

Two of Fischer’s designs are now on display and available for purchase at the Wisconsin State Fair though Sunday, Aug. 15 or through the online Official Fairwear shop. The Summerfest designs have not yet been released to the public.

Both of Fischer’s State Fair efforts feature an illustration of a cow with an outline of the state cleverly stamped on the animal’s forehead. One shirt displays the “Wisconsin State Fair” crest, while the other showcases a “Back and Butter Than Ever” slogan. 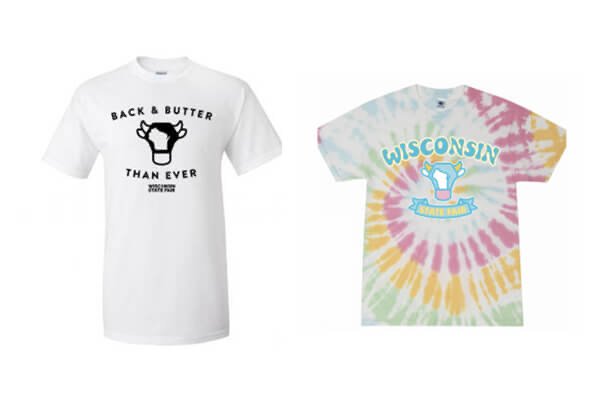 The high-profile opportunity came about thanks to a professional relationship Concordia faculty member Dr. Tess Kenney had with TSMGI.

“That’s the great thing about Concordia’s program,” says Fischer. “A lot of the professors have that hands-on experience and industry connections because they’ve actually done it in the real world.”

Concordia also boasts a cooperative degree program with the Milwaukee Institute of Art and Design (MIAD) that allows students to live on Concordia’s campus and experience the perks of Concordia’s close-knit Christian community, but also gain access to the expertise and additional industry connections of MIAD professors. Oftentimes, students even pay less tuition if they enroll through Concordia.

“It definitely helped me with the money situation,” said Fischer. “And even without that incentive, it was great to get the experience of both schools and both sets of professors, who all have amazing referrals. Concordia’s Christian focus was really important to me, and I made some really great friends because I went here so I wouldn’t have wanted it any other way.”

Outside of her Wisconsin gigs, Fischer is making a name for herself with her illustration and design work on behalf of professional athletic organizations nationwide. Even before she graduated from Concordia, she secured a job with Fox Hammer Media, which is headquartered in Port Washington, Wisconsin. Fox Hammer serves team titans the likes of the Toronto Raptors, Chicago Bears, New England Patriots, and New York Yankees. The company bills itself as an agency that helps teams, leagues, and athletes captivate fans like never before through dynamic live-event content.

“My family has always been super supportive of my choice of major, but I will say that employability was a concern initially,” Fischer says. “It’s just cool now for them to see what I do and know that I am actually really successful in this field.

“While the art field is insanely competitive, there are also more job opportunities than ever. Businesses want logos, creative for their websites, and so on. There are so many avenues for an artist these days.”