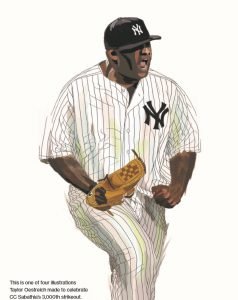 Taylor Oestreich (’20) was more than 900 miles away from Yankee Stadium on April 30, 2019, when CC Sabathia made history and became the 17th MLB pitcher ever to earn 3,000 career strikeouts. Nevertheless, Oestreich’s remote contribution put her right in the midst of the monumental celebration.

Moments after Sabathia struck out Diamondbacks catcher John Ryan Murphy in the second inning, the Yankees official Instagram account posted a celebratory gif for which Oestreich, still a student at Concordia, served as illustrator. The post received a whopping 160,377 likes—an arresting accolade for a budding professional.

The opportunity came thanks to an internship with up-and-coming sports design agency Fox Hammer Media, located in Port Washington, Wisconsin, right in Concordia’s backyard. The internship will turn into a full-time position once Oestreich graduates this May with her bachelor’s in illustration and minor in animation.

Despite its unassuming home base, Fox Hammer serves team titans the likes of the Toronto Raptors, Chicago Bears, New England Patriots, and New York Yankees. Started by Aaron Cummings, the company bills itself as an agency that helps teams, leagues, and athletes captivate fans like never before through dynamic live-event content. It has contracts with teams within nearly every professional athletic association that exists—from mainstream darlings, including the NFL, NBA, NHL, and MLB, to more niche competitive organizations such as the Overwatch League’s Boston Uprising. By consistently delivering dynamic graphics and content, Fox Hammer has increased its client base year after year, and has become the go-to agency for more than 30 pro teams and leagues around the world. 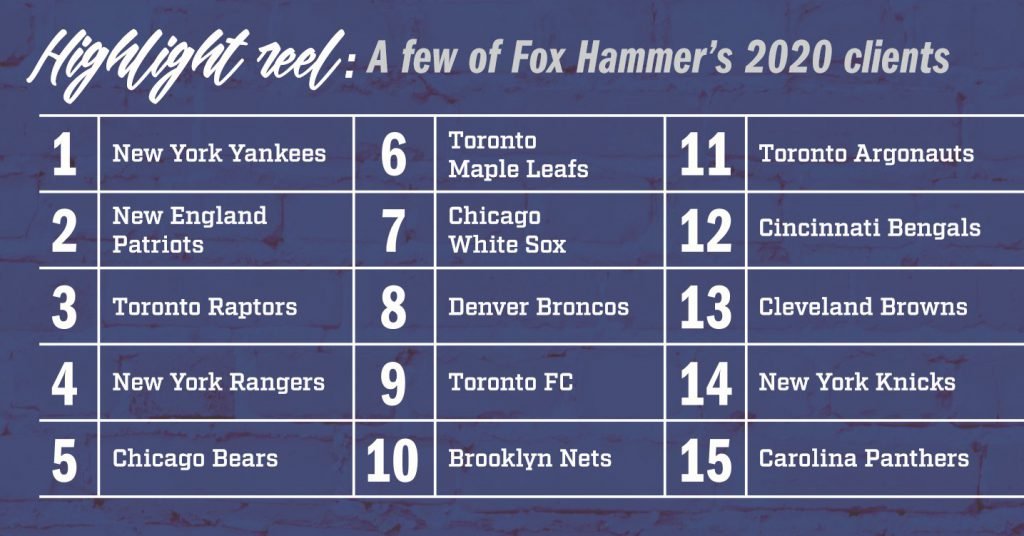 “I’m a huge sports fan,” said Oestreich. “Being in the art field, there’s not a ton of job opportunities like this, but here I am getting to combine two of my favorite worlds in one of the best ways possible.”

An enterprising agency needs equally promising talent to succeed, and Cummings has found the skills and drive needed for the job within Concordia students. Two recent graduates, Jonathan Michel (’18) and Thomas Paschke (’18) and two soon-to-be-graduates, Oestreich and Taylor Rystrom (’20), have quickly become valuable members of the Fox Hammer team. Both Oestreich and Rystrom have secured full-time positions at the organization once they graduate.

“Concordia is equipping its students with the tools needed to succeed,” said Cummings. “I’m impressed by the level of skills, creative thinking, and deep understanding of the industry that each Concordian on my team has shown. On a personal level, I’m also impressed by the school’s mission and believe it only strengthens graduates’ ability to succeed. Concordia students have proven to be hard-working employees who put team before themselves—a combination that is critical for success in our industry.”

Michel joined the Fox Hammer team shortly after his May 2018 graduation from Concordia and set the tone for future CUW hires.

As a young professional, it would have been easy to get swept up in the magnitude of it all, but Michel managed to keep a level head. The only team that gave him pause was his very first assign, the New York Yankees.

“The Yankees were pretty intimidating to me at first,” Michel said. “The people on staff are so nice, but there’s an intense reputation that comes with the team just because there’s so much history there.”

Now, well over a year in, the nerves have settled and, time and again, he’s risen to the challenge of game day.

The key to game-day success is preparation. Fox Hammer employees work months in advance to be able to quickly provide graphics and animations with real-time scores, quotes, or images received from the franchise’s on-site media crews.

“It takes a lot of planning and effort to help teams capitalize on major moments as they happen,” Cummings said. “Fox Hammer is a demanding environment for any designer. We work with the biggest brands in sports, and they expect nothing but the best. Our clients rely on us to deliver dynamic graphics in pressure-packed situations, and so far every Concordian has been able to meet the challenge.”

While it might seem counter-intuitive to outsource design, Fox Hammer brings a wow-factor that’s hard to pass up. Teams tap Fox Hammer to visually tell their story and engage fans at a deeper level.

“Social media is about what is happening now. Posting something tomorrow or the next day is already too late,” Cummings said. “Because of our diverse team, Fox Hammer can provide anything from amazing illustrations to dynamic motion graphics in near-real time.”

A sense of professionalism is paramount when fan loyalties are at play. Slinger-born Oestreich, who grew up a die-hard Packers fan, received plenty of good-natured razzing from her family when Cummings called upon her to illustrate a commemorative scrapbook for the Chicago Bears’ centennial celebration.

Ultimately, the magnitude of the offer beat out her homegrown allegiance, though. It helped that her fiancé, a native of Joliet, Illinois, and lifelong Bears fan, was thrilled for her opportunity.

“That was one of those projects that I knew would be super meaningful to the fans, so it was a real honor to be a part of it,” Oestreich said. “I think that is a project that I will definitely talk about for a while.”

Oestreich, Michel, Paschke, and Rystrom are quick to laud their Concordia experience.

“The faith-based atmosphere was definitely a huge draw for me when I was first considering Concordia,” said Michel, “but it’s also been clear to me in observing just our little group at Fox Hammer how well Concordia trained us for this opportunity.”

At Concordia, it’s not just about learning how to be excellent in a given discipline, it’s about realizing a bigger picture and understanding that we all strive to do our very best because we’re gifted by the Lord to do so.”

“When I first got to Fox Hammer, Aaron was super impressed with how well I worked in Photoshop and Illustrator and how quickly I could pick up on things,” Oestreich added. “They are not easy programs to learn so a huge shout-out to my CUW professors for teaching us to use all of those programs and to be confident enough in them to perform any given job.”

Once upon a time Oestreich contemplated whether an illustration major was a wise choice. In hindsight, she needn’t have worried. She’s exactly where she would like to be.

“It’s just super exciting to be a part of Fox Hammer, and I’m so thankful to have had the training I received at Concordia that more than prepared me for it,” Oestreich said. “It’s definitely been a huge blessing.”