Two men and a boat: Reflections on Fishers of Men

How the Mequon campus’s iconic statue represents what our university is really all about.

Ever since I started working at CUWAA, just over a year ago now, I’ve been enamored with the Fishers of Men statue that adorns the magnificent bluff on the Mequon campus. In fact, on my very first day reporting to work, I took a picture of it from my car as I drove into the parking lot (don’t worry, I came to a full and complete stop). I was struck by how the snow and the crisp, blue sky set off the two figures in the boat.

Shown above, it turned out to be the first photo in what has become a fairly substantial collection. I have my favorites loaded in my computer, cycling through as background images, which I primarily see on my second screen. In those times when I’m working and I need to stop and clear my head, they give me a great opportunity for reflection.

One thing I think about is how much the location of the statue affects its perception. I’ve read that the statue wasn’t always on the bluff; that once it was in a much more “ordinary” spot on campus. I think about how in another location, it would be a “nice little statue.” But where it is now … well, it’s just stunning.

Inspired by the first chapter of Mark, the statue depicts the calling of Jesus’ first disciples—presumably Simon (Peter) and Andrew. “And Jesus said to them, ‘Follow me, and I will make you become fishers of men.’ And immediately they left their nets and followed him.” (Mark 1:17-18, ESV)

RELATED: The Tale Behind “Fishers of Men”

So, the statue has a specific meaning: It’s about trusting Jesus enough to leave behind what you know in order to start a new life following him. But what if you didn’t know the name of the work or the verses that inspired it? What might the statue say to you then?

When I reflect on pictures taken in different weather conditions, various interpretations come to mind. For instance, there’s a photo in the fog that instills a sense of being lost. In this image, the fishers appear to be struggling to find their way. It’s not immediately obvious that the subjects are stepping out of the boat, so it may be perceived that they’re trying to find their way back to shore, to find their way home. There’s a tension in it, a slight sense of sorrow. 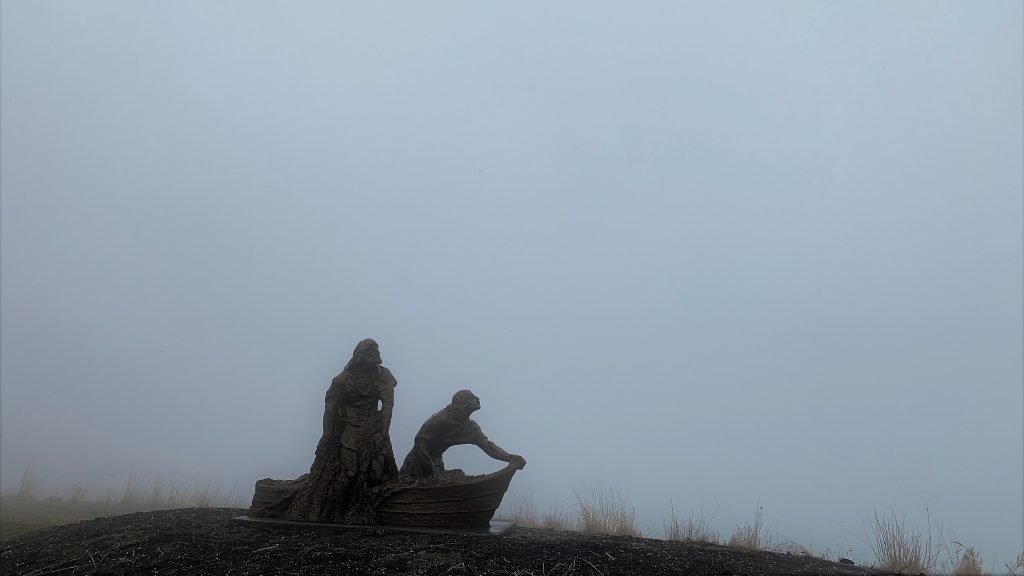 In another photo, a thin strip of pink and orange light paints the horizon. It’s not quite dawn, but not long after. The sky is a cloudy blueish-gray. The angle of this photo shows the figures gazing out over the water, perhaps filled with hope and anticipation at the start of a new day. After all, God’s mercies are new every morning. (Lamentations 3:22-23) 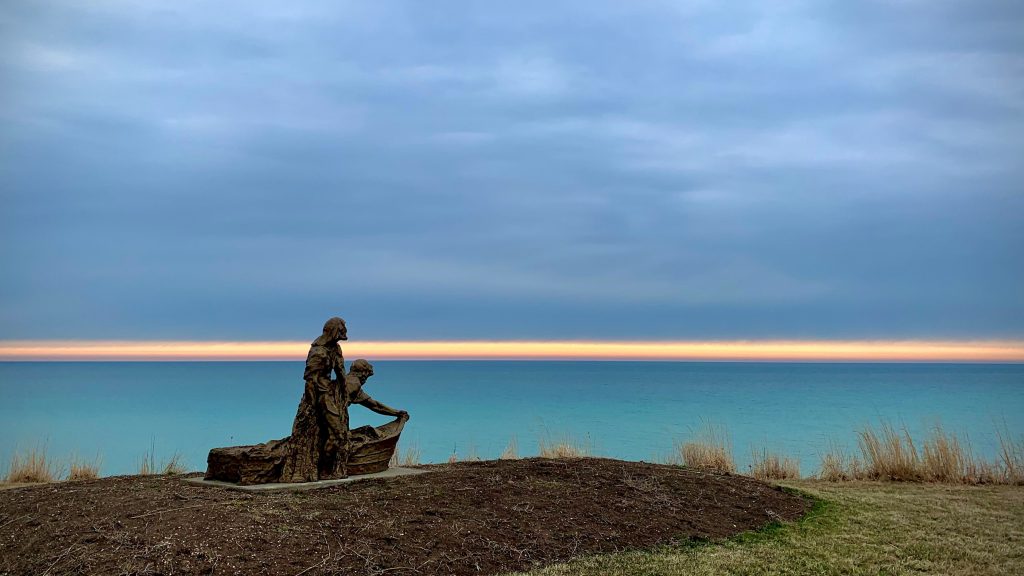 Another is one I doctored a bit, turning a deep-blue sky jet black. The result is stark, foreboding, bleak, ominous. If the fog made the fishers look lost, the lightless sky seems to remove all hope. Is this a life completely removed from God: utter darkness with no light, no bearings, no way forward, and no hope of rescue? Thankfully, this is not a situation we ever need find ourselves in. God promises no matter how dark and hopeless our circumstances may seem, “He will not leave you or forsake you” (1 Chronicles 28:20). 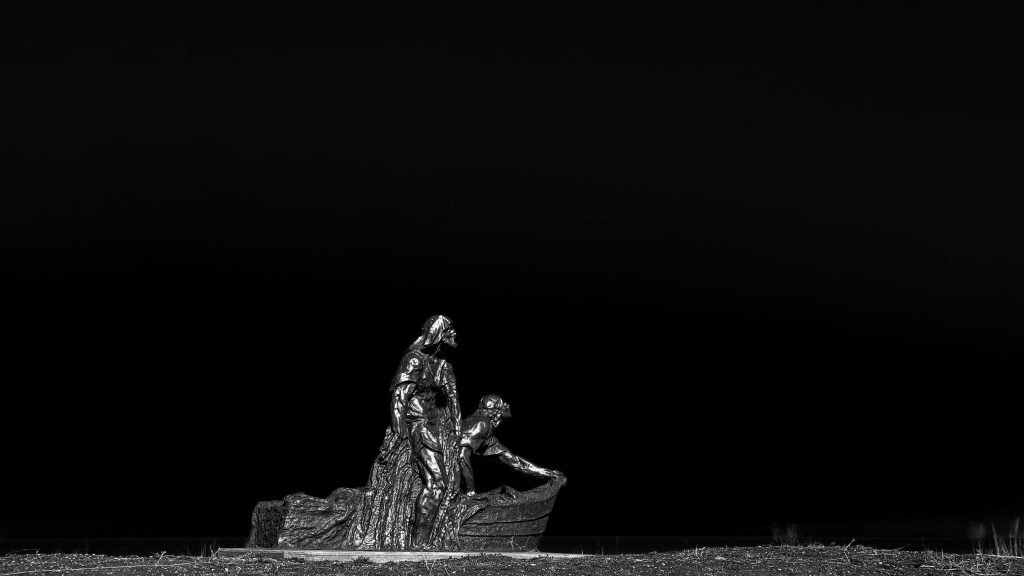 Pictures of the statue with snow on the ground take on different meanings, as well. In one, patches of ground are visible beneath the snow cover. The clouds on the horizon are beginning to break up, suggesting the waning of a passing storm. And yet, icicles still hang from the beards of Simon and Andrew. They seem to be weathering the storm, but they are still in the midst of the struggle. They appear cold and weary, yet ever hopeful of whatever is yet to come. 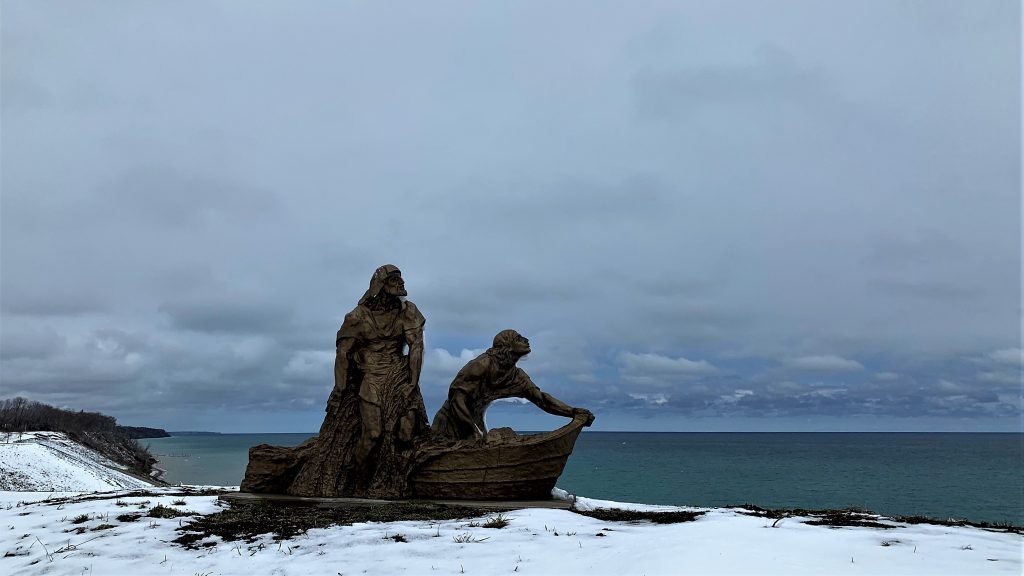 Perhaps what awaits them can be found in a different photo, with the clouds dramatically breaking apart and the sun sparkling on the water. Where there’s light, there’s hope. And better days are clearly on the way. 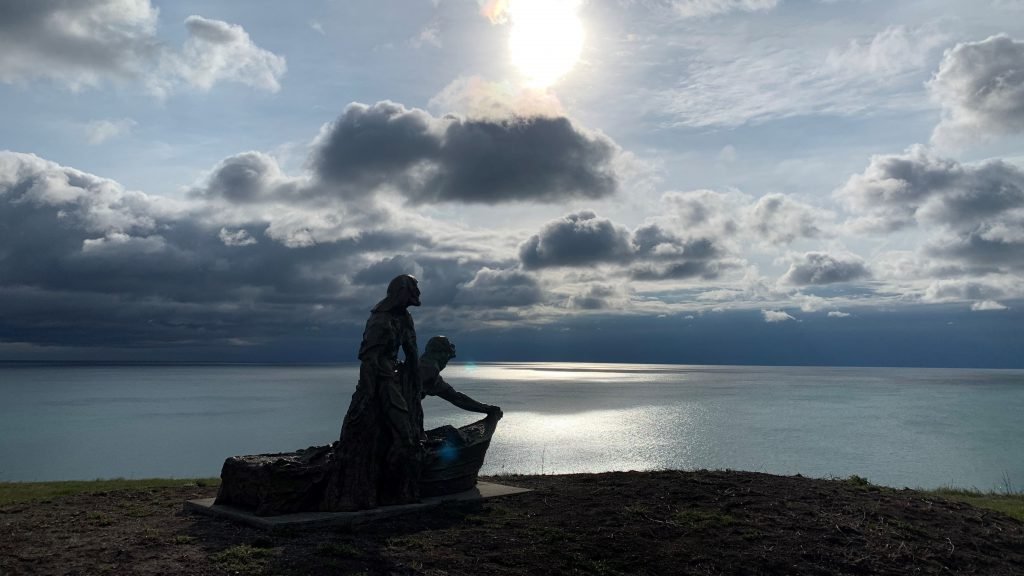 One of the more recent additions to the gallery, taken on a weirdly misty morning in June, is another fog scene. But this time, the sun burns brilliantly in the upper corner, cutting through the thick mist. The figures, in near-perfect silhouette, appear to be gazing toward it. It is much more hopeful than the other foggy photo. Perhaps the sun represents the light of Christ, drawing the men toward eternal salvation, as well as a better path to follow here on earth. 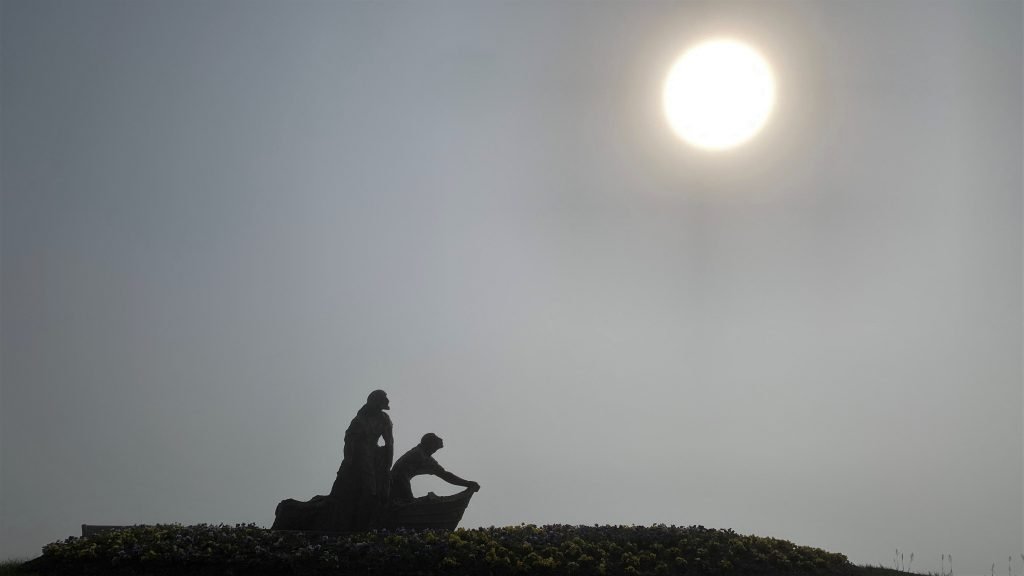 That said, it’s also possible to see, in this same photo, the hot sun beating down on the fishermen—as if they were lost at sea, perhaps thirsting in the heat for fresh water to drink. It might bring to mind the woman at the well (John 4:1-42), to whom Christ says, “but whoever drinks of the water that I will give him will never be thirsty again.”

Then there’s the shot that shows storm clouds moving out over Lake Michigan. The big, billowy clouds are very dramatic, and the angle suggests that Simon and Andrew are gazing at them. Perhaps they are reflecting on Psalm 19, which begins: “The heavens declare the glory of God, and the sky above proclaims his handiwork.” 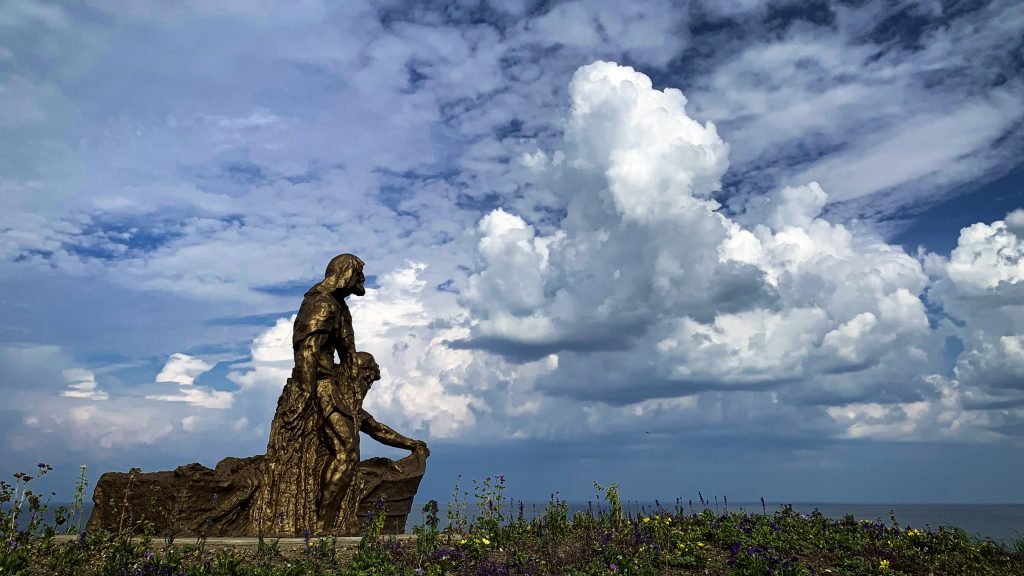 The most dramatic picture of the collection reminds me not so much of Simon and Andrew, but of Christ himself. In this depiction, the sun is directly behind the standing figure, casting a hint of a halo around his head. His beard is prominent, reminiscent of Jesus as we typically picture him. The clouds behind him, in high-contrast black-and-white, suggest a parting of the skies. It feels like a moment of triumph—perhaps suggestive of Christ rising from the grave. 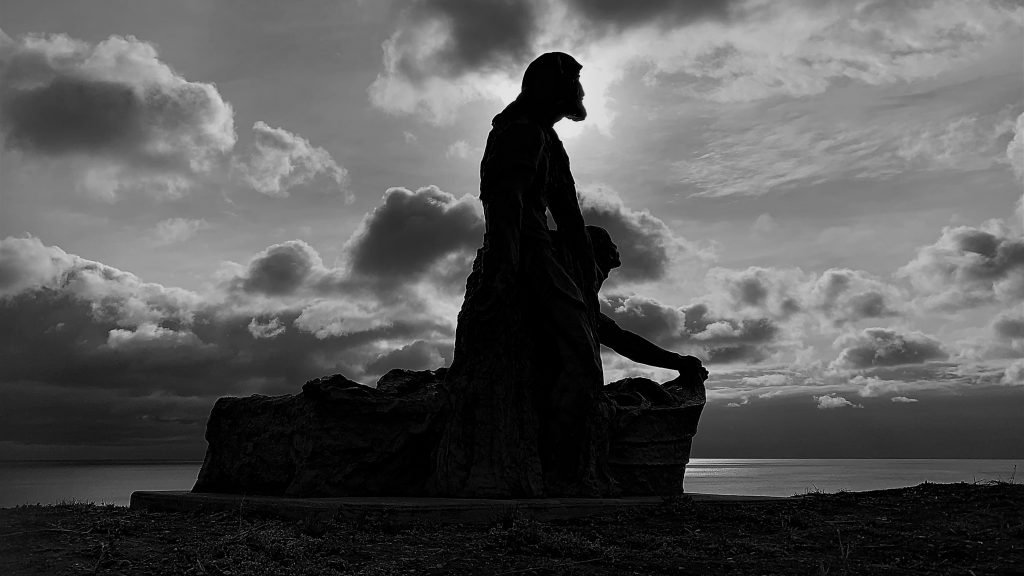 In a sense, I think this last picture is representative of something you can see in all of them—if you look the right way.

Because here is what I find most intriguing. Consider for a moment the statue itself, regardless of the weather as its background. Most of the time when you look at it you get the sense that the men are launching their boat. Their gazes are fixed looking outward over the front of their vessel—and also slightly upward. When you go back to the Bible verses it depicts, you realize they are likely looking toward Jesus.

Why are they looking up? There’s no reason to think that Jesus was particularly tall. In fact, Isaiah 53:2 suggests there’s nothing exceptional at all about Jesus’ physical appearance. I believe the position of their faces is simply a metaphor, something the artist used to suggest that Simon and Andrew are gazing upon the truly Divine. 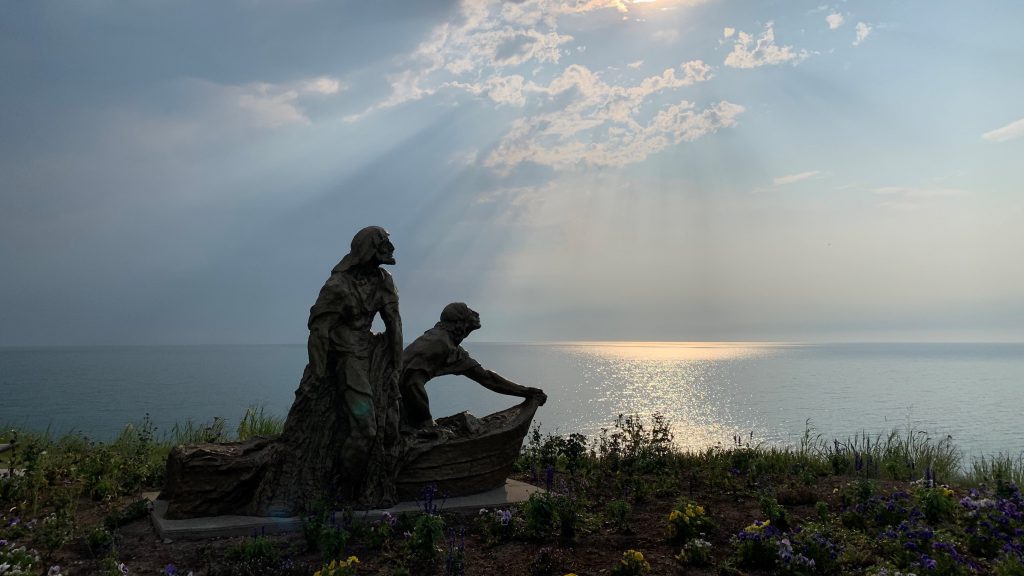 That posture, along with the expressions on their faces, reminds me of the 1959 movie Ben-Hur, in which Jesus’ face is never shown. Rather, we “see” the Messiah reflected in other people’s reactions. When Jesus looks at them, they feel and experience something beyond this world. We see and feel it on their faces. It’s a very powerful way to depict the Lord, one that lets each viewer impart his or her own emotions to the scene.

That’s what I believe is so powerful about this statue. It shows two men. It shows a boat. It shows nets being dropped. In context with the water it shows a shore. But what it shows isn’t really what it’s about. Because even though he’s not specifically depicted, the statue is very much about our Savior, Jesus Christ, and how we should respond to him. How we should allow him to lead us. 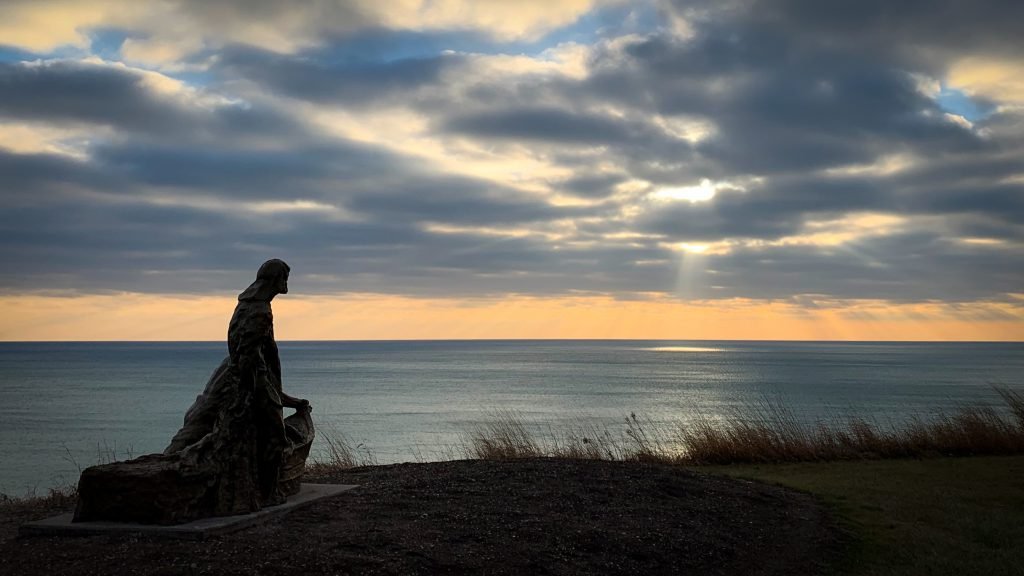 This is true no matter the adversity we might be facing. In fact, when things get rough it is especially important to turn our eyes to and trust the One whom “even the wind and the sea obey” (Mark 4:35-41). “Why are you so afraid?” Jesus asks his disciples in that passage. “Have you still no faith?” Whatever storm might be raging, whatever our differences of opinion may be, fixing our eyes on Jesus is the surest way to see us through.

Here at Concordia, I experience that Christ-centric approach every day. I hear it in the daily Chapel services. I see it in the hearts of students who serve in so many different ways. I feel it from a devoted faculty and staff (on both sides of Lake Michigan) intent on reflecting the light and love of Christ. I’m reminded of it every morning when I drive by those two men in that boat and reflect on how those sinful, imperfect fishermen dropped everything when their Master called.

And that’s why Fishers of Men is such a great reflection of our Lutheran higher education community. Because it reminds us that even when you can’t actually see him, Jesus is at the center of everything we do. 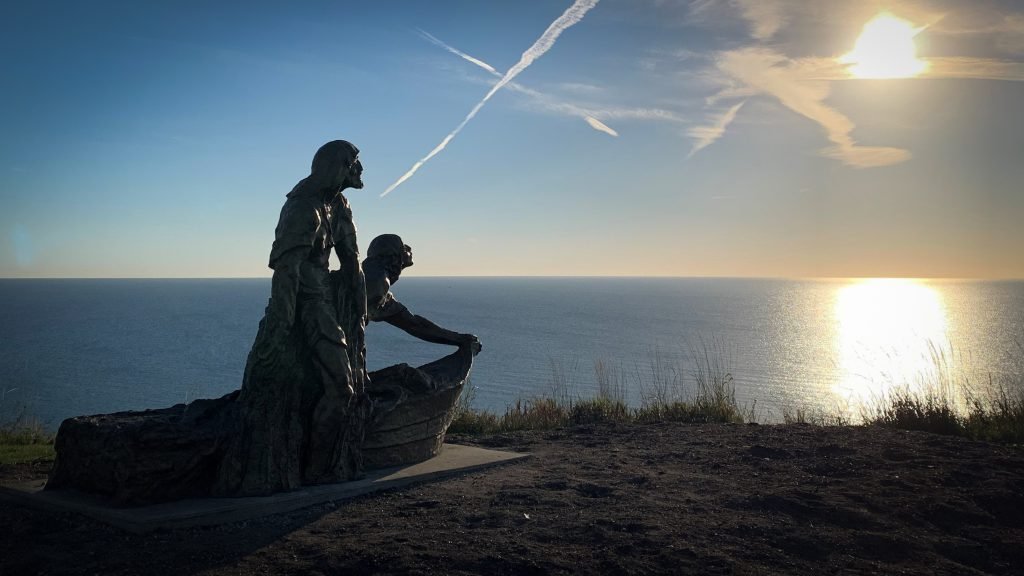