The tale behind ‘Fishers of Men’

It's one of the most iconic features of Concordia's Mequon campus.

At the height of the bluff, appropriately overlooking Lake Michigan, sits the Fishers of Men Statue, a nearly 6-foot tall, bronze sculpture of two men in a fishing boat which pays homage to Mark 1:17.

It’s impossible to miss as you’re taking the main drive onto campus. While it may be a familiar sight to many Concordians, it is likely that most do not know the statue’s history.

The piece is inspired by the first chapter of Mark. Jesus calls upon Simon, Andrew, James, and John to follow him, and, filled with the Holy Spirit, they immediately drop their nets and obey.

“Jesus’ promise to His first disciples is also a call to us; He calls us from the mundane lives we would lead without Him to the exciting and adventurous lives we live in faith as we follow Him,” said Pastor Smith. “As the statue looks over the vastness of Lake Michigan and we consider a life of ‘faith-fishing,’ it makes the opportunities to do that seem thrilling and limitless—like the number of ways that students will live out our mission serving Christ in the Church and the world.”

The statue came to sit on our campus in 1993. It originally stood inside the loop drive at the entrance to Luther, but when the bluff restoration was completed in 2007, it was moved to its current location.

While the statue is incredible in its own right, the artist’s story amplifies its majesty. Igor Vasiljev (1940-1997) came to America from Latvia through a connection with a church in Sheboygan after the collapse of the Soviet Union in 1991.

While in his home country, he was a professor at the Art Academy in Riga, the capital of Latvia, and taught there for over 30 years. He graduated from the Academy in 1962  after enrolling as an external student at the school when he was just 15 and becoming a full-time, second-year student in 1957. The burgeoning of his professional career collided with the rise of the communist regime. Socialist Realism was in its height, compelling artists to present the USSR in a positive light and snuffing out all individualism and creativity.

Vasiljev’s preferred medium was wood, and he focused on portraying physical and spiritual beauty in his work. When he visited this country in 1993, he participated in many exhibits and created many unique works, but most of his work remained in Latvia.  Today, his art can be found all over the world.

At a Concordia supporter’s urging, former Concordia president, Rev. Dr. John Buuck, contracted the artist to develop a piece from a 6-foot wooden log Vasiljev brought from his home country. This original piece still resides outside the Chapel of Christ Triumphant, to the left of the main entrance.

After the log was developed, a suggestion was made that a larger piece be wrought, and Buuck had a vision for a statue depicting the fishers of men story.

Igor Vasiljev passed away in 1997, but his work continues to bless our campus.

“We were so pleased to work with him, and of course his beautiful artwork was good for our campus,” said Buuck. “Every time I drive the loop and see the fisherman in the boat along the bluff,  I think of how this all came about.”

Fishers of Men in Photo

Concordia’s iconic statue, set against the beauty of Lake Michigan, has inspired many photography enthusiasts. Here are just a few images that show off the brilliance of the sculpture. 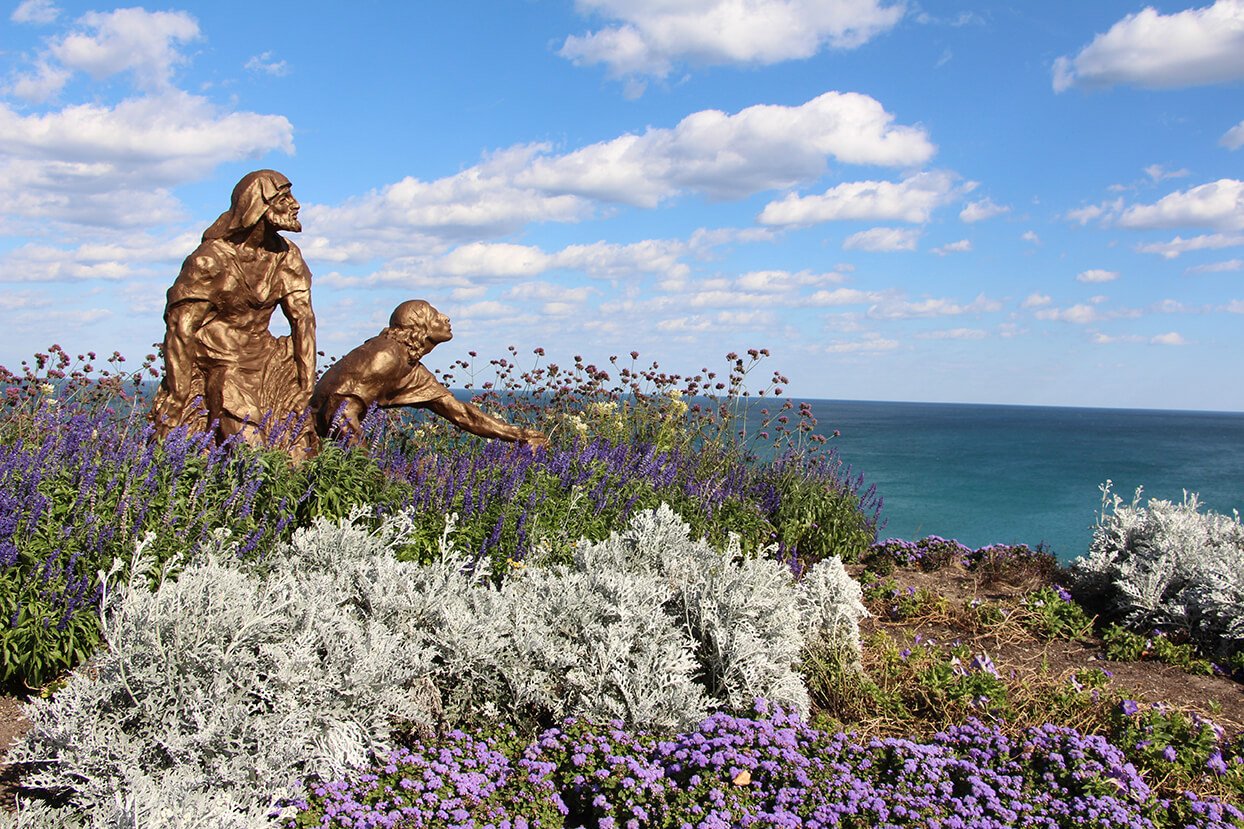