In their darkroom photography class, Concordia students are exposed (pun intended!) to a whole new “old” way of capturing and creating images.

Remember film? Of course you do! Unless, perhaps, you were born in the 21st century.

For many CUW students today, film photography was already pretty much obsolete by the time they picked up their first camera. As far as many of them know, photography has always involved automatic exposure, instant feedback and results, and—this is a big one—unlimited chances to get the result you’re looking for without spending one extra penny. 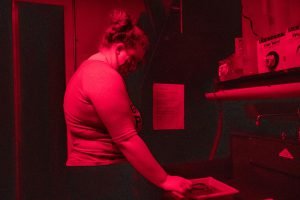 Back in the “old days”—say, the late 1900s, or even early 2000s—photography was different. It was a much more laborious process. It was a lot more hit-and-miss. It involved a lot of waiting. And it was much more expensive. Digital photography has so many advantages it has virtually wiped out the old way of taking pictures.

So why would anyone ever want to go back to those days and learn to shoot on film, develop it yourself, and make your own prints under a dim red bulb in an otherwise pitch-dark room that smells faintly of chemical developer?

Because something about it is just so darn cool!

“It’s definitely a different experience for the students who take this class,” says adjunct professor Sandy Buhk, who teaches the Art 131 Darkroom Photography class. “They’ve never experienced film, or even prints for the most part. It does happen, but it’s rare that I get students who have done this before.”

Perhaps the biggest shock to the system is realizing you won’t see the results of your picture-taking efforts for hours, or even days. When you take a picture, you have to trust that your knowledge and understanding of the film and exposure are on target. There’s no preview, no instant feedback. And the better you understand the fundamentals, the better your chances of success. 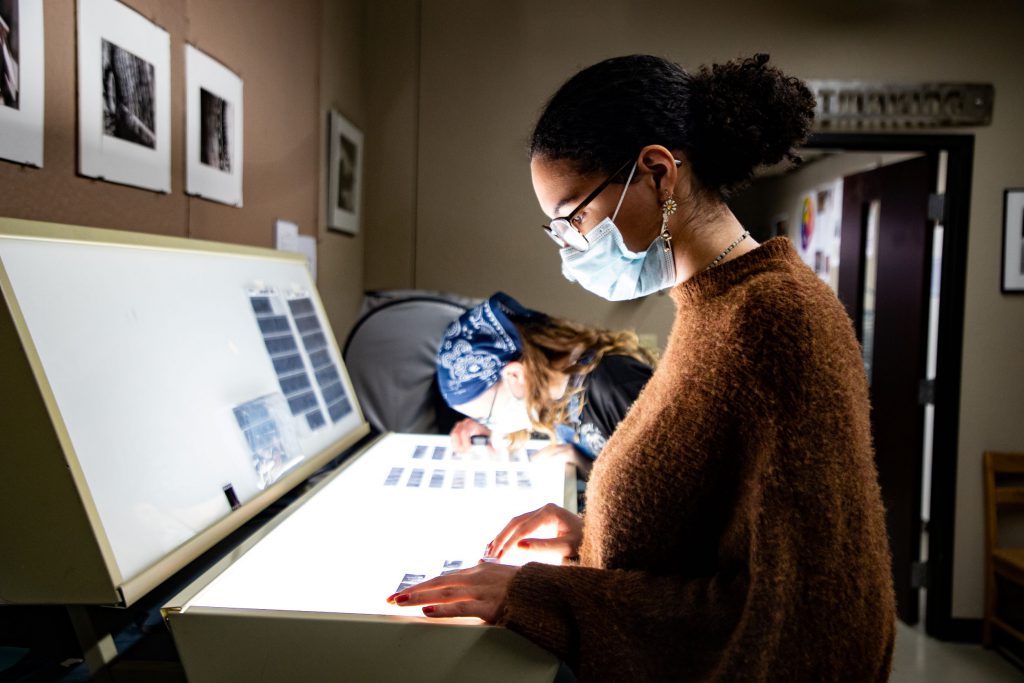 “You have to know what you’re doing before you shoot, otherwise you’re going to waste a bunch of time developing film just to see some not-so-good images,” Buhk says.

On the plus side, it forces you to think more about what you’re doing.

“It slows you down, and you have to pay attention more to what you’re photographing,” she explains. “It makes you pay attention to exposure more than you would than when you’re shooting with a phone or digital camera.”

And therein lies the true art. When the outcome is based on your skill and knowledge rather than advanced digital electronics, the results can be much more satisfying.

“It’s more hands-on with film, and so many more steps are involved,” says Amy Kuske (’22), who’s studying to become a middle school math teacher. “So I think you get to appreciate the pictures more, because you’re investing so much more in them.”

“I actually like developing the film more than I like taking the pictures,” says John Davenport (’22), a student in the School of Nursing. “That’s when you get to see how it turns out, because you can’t see it immediately. That’s the part I enjoy most.”

Kaitlynn Fleisner (’22), majoring in interior architecture and design, is one of the few who have done this kind of thing before. 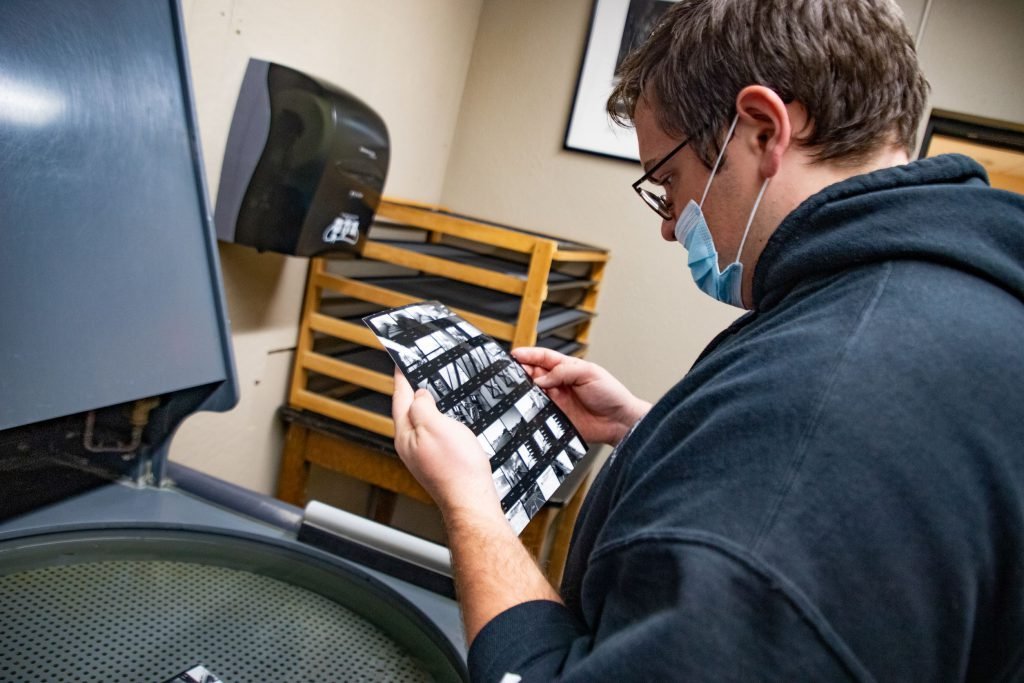 “I love darkroom photography,” she says. “I took like three classes in high school, and I just wanted to continue to do it here.”

Though it’s not directly relatable to her major, Kaitlynn says this and other photography classes she’s taken help her “build stories with pictures” and help her see angles better, both of which will help her as a designer. Given the choice between film and digital, she says she actually prefers the hands-on process of film.

“I think it’s more fun to be involved with the film, and developing film, and making the enlarged pictures,” she says. “I think that’s really fun.”

“I wasn’t really sure how well I would do in this class, because I have no photography background whatsoever!” Trinity says. “But it’s actually been really easy to understand, and I’ve enjoyed learning about how film gets developed.”

One thing that caught her by surprise is how “simple” the subject matter could be and still result in an interesting photo.

Cool enough that some of those photos will soon be framed and hanging proudly on her wall.

These days, most people probably have thousands of pictures on their phones and computers. It can be a challenge to know what to do with them all. Ever try to find a particular photo that’s meaningful and have no idea where it might have ended up? No doubt, some people are good at keeping track of it all. But for many these days our photos are devalued just by the sheer volume of them. 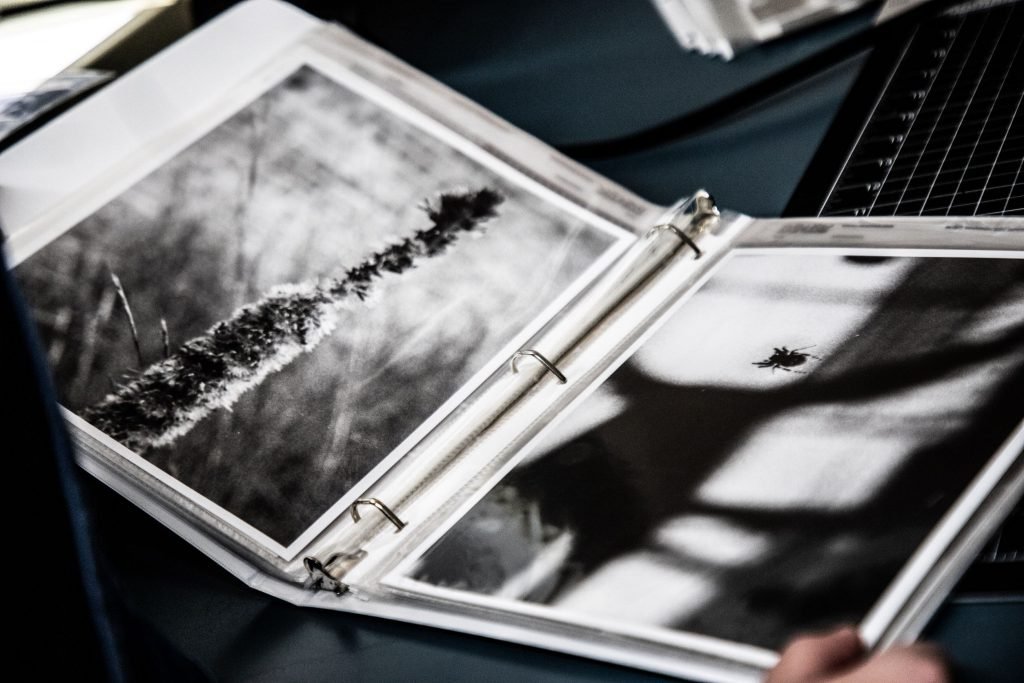 Darkroom photography is just the opposite. Each print represents possibly hours of work, and when you finally get it just right, you cherish it accordingly. Perhaps that’s why darkroom photography may be making a bit of a comeback.

“I think it’s kind of trending back as an art form,” Buhk says. “I think artists love the process, and are starting to come back to it.”

Still, darkrooms are hard to set up, and there can be a significant set-up cost involved with the equipment. All the more reason you should take advantage of the opportunity to take the darkroom class at Concordia.

“This is a once-in-a-lifetime opportunity!” Buhk says. “You may never get another chance to have access to a darkroom like we have here.”

To learn more about photography classes at Concordia University Wisconsin, visit the Department of Art page at cuw.edu.