On Monday, Nov. 15, Concordia University Wisconsin welcomed two speakers of international repute to its third annual Liberty, Faith, and Economics Summit: Titan of tech Jaron Lanier and world-class epidemiologist Jay Bhattacharya, who has made waves amid COVID for his denouncement of vaccine and lockdown mandates.

This year’s summit focused on the collapse of civil discourse in the face of COVID-19 and how social media and BigTech companies have played a role in it. 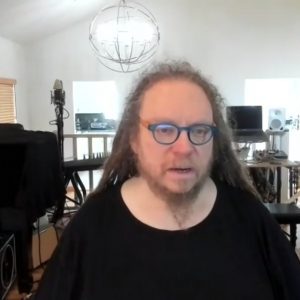 Lanier appeared remotely and served as the closing speaker of the day-long summit. A pioneer in the development of virtual reality (he coined the term), Lanier is currently a Microsoft scientist but previously worked for Facebook and is one of several top-level employees who have defected from the company for concerns over its immoral practices.

“Starting around the turn of the century, a business model evolved that we’ve come to equate with social media, and that thing is pure evil,” Lanier told Concordians who gathered in the Plaster Collaboratorium to watch his Zoom Webinar.

Lanier has received international recognition for his contributions to the field. Wired Magazine named him to its list of “The 25 Most Influential People” and Time Magazine has listed him among the 100 most influential people in the world.

CUW’s contract with Lanier does not permit the re-sharing of his presentation, but Concordians can watch Lanier in “The Social Dilemma” on Netflix or pick up his No. 1 Best-selling book, “Ten Arguments for Deleting Your Social Media Accounts Right Now.” 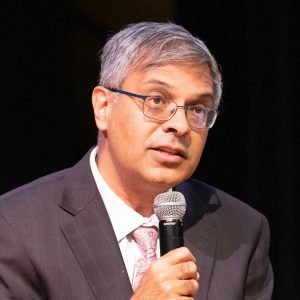 Bhattacharya—who holds an MD and PhD in economics from Stanford University, serves as Professor of Medicine at Stanford University, Senior Fellow at the Stanford Institute for Economic Policy Research, and Professor of Economics—appeared in person at Concordia. He has published more than 130 articles in top peer-reviewed scientific journals of medicine, economics, health policy, epidemiology, statistics, law, and public health.

Bhattacharya is one of three authors (from Harvard, Stanford, and Oxford) of The Great Barrington Declaration, which was written in October 2020 and encouraged the lifting of lockdown restrictions on young and healthy people while focusing protection measures on the elderly. More than 870,000 doctors and epidemiologists nationwide have signed their support of the document to date.

Bhattacharya’s Concordia presentation, done in a Q&A format over the noon hour, built a case for the missteps of the National Institutes of Health while conveying the highly political nature of the national debate, to the detriment of the American public.

“I’m not particularly political because when I write something I hope to be able to convince everyone of it, no matter their party. But this became something that was political,” Bhattacharya told those gathered in the Todd Wehr Auditorium on CUW’s campus.

“My friends started writing me and essentially disowning me. They questioned my motives,” he continued. “(Despite this) it became personally clear to me that if I’m going to have any integrity whatsoever in my personal life, I had to speak up about lockdowns.”

In case you missed it

CUW Food and Beverage Employee Shortage Forum brings big-name industry professionals to campus
previous story
The arrival of a Savior for all: Moving from apprehension to anticipation
next story