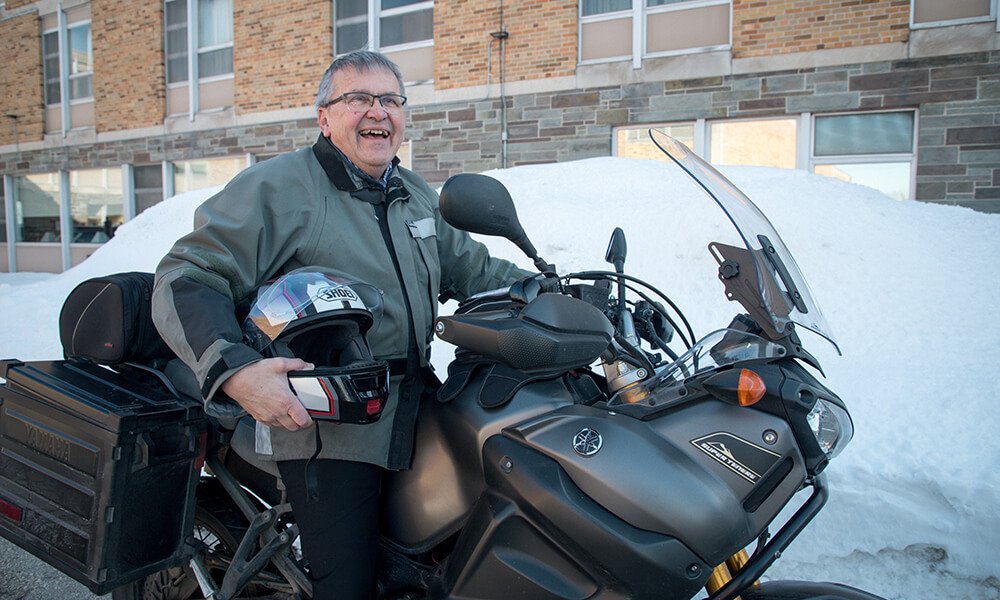 Christmas came early for Dan Paavola on Nov. 27, 1970, when his father took a break from the endless work of the family’s 200-acre dairy farm in Minnesota and drove the young Paavola into town to buy an early gift: his first motorcycle, a Yamaha 305.

Paavola was still two years shy of the legal driving age at the time, but he’d already had years of experience with his father’s farming equipment. Paavola was only 7 when he first began to operate tractors, and by age 9 he had graduated to trucks.

Even though the elder Paavola never rode motorcycles recreationally himself, he served as an Army mechanic during World War II. A man of few words, Edwin Paavola showed his love to his son through their mutual love of machinery.

As soon as the pair returned home, young Paavola fired up his Christmas present, and from then on he was hooked.

That was week one, and rarely a week has gone by without a ride. In fact, Paavola can guarantee that for the past 23 years not a seven-day stretch has escaped him without at least one ride (and oftentimes many more). The Concordia University Wisconsin theology chair began to keep logs when he joined the university’s faculty in 1996 and knows down to the detail the temperature, distance, and weather conditions of his most interesting rides.

Thus far, his record low temperature on a ride to work was 0 F, which he notched on Feb. 19, 2019. He rode his 2013 Yamaha Super Ténéré that day, one of three bikes currently in his possession and among the 12 he’s owned over his lifetime.

Paavola says his rides are largely to credit for his trademark sunny disposition. No matter the chill in the weather, once he’s on a bike his troubles inevitably melt away.

“I tell my students, ‘You want me to ride. I’m a happier person when I ride,’” Paavola says with a grin. “If you have some issues or stress, a 60-mile round-trip commute to work will take it right out of you.”

Weather permitting (his only deterrent typically is snow), Paavola will ride seven days a week, either from his home in Cedar Grove to Concordia’s Mequon campus or on his weekend travels to guest-preach at churches throughout Wisconsin. Each summer, he’s also certain to book two one- day trips to northern Wisconsin, and he tries to include at least one out-of-state excursion a year. Last summer, he rode the 1,109 miles home from Denver in one day. He left at 3 a.m. and made it home in 16 hours and 45 minutes, stopping only for restroom breaks.

In all his years of riding, Paavola has never had a wreck that caused serious injury. The closest he came was on Aug. 13, 2014, when he hit a cement block on I-43 going 70 miles per hour. The car in front of him was able to straddle the block, but by the time it came into Paavola’s vision the collision was unavoidable. Paavola and his Super Ténéré launched into the air. When they landed, hard, on the road, the impact completely obliterated the air from his front tire and mangled the rim, but Paavola managed to keep the bike upright and ride it to a wobbly stop.

“It took four weeks to repair, which is why you always have to have two motorcycles—or three in my case,” Paavola says. “If one goes down, you can’t possibly stop riding.”

As if his driving skills weren’t impressive enough, Paavola has mastered the art of multitasking while on the road. The much-loved Concordia professor and noted LCMS theologian knows Scriptures so well that he’s able to draft his weekly sermons in his head while he rides. He also uses his travel time to mentally rehearse his homilies.

Paavola prefers to ride solo; although occasionally his wife, Holly—whom he praises for selflessly supporting his hobby—will ride with him on the back of his 2016 Yamaha FJR1300ES. A mutual love of riding, however, is something Paavola eagerly shares with others. He even uses it as an icebreaker on the first day of classes.

“I’ll draw a circle on the board and list a handful of my interests on it, and then ask students to identify where they connect with me on the circle,” Paavola explains. “‘Dogs’ is always the No. 1 commonality, by the way, but then ‘motorcycles’ usually rolls in as second.”

The independent scholar
previous story
Primetime for online
next story