PreServing What Matters Most

When Dr. Lawrence Sohn was asked to serve as assistant to Rev. Patrick T. Ferry, Ph.D., the newly inaugurated young president of Concordia University Wisconsin back in 1997, he gladly accepted his friend’s request under one condition: “Keep me behind the scenes; don’t put me in front of people,” chuckled Sohn as he retold the story about how he went from the position of chairman of teacher education to the right-hand man to the university’s 10th president.

Now, after 37 years of faithfully serving the university in a variety of capacities—most recently as keeper of the CUW archives—and doing his best all the while to keep out of the spotlight, Sohn will retire at the end of the academic year.

Sohn has worked in education his entire career. He began as an elementary teacher at Mount Calvary Lutheran School in Milwaukee, Wisconsin, in 1959 and moved through the ranks to become principal. In 1980, he received an unexpected call from Rev. R. John Buuck, Ph.D., then president of Concordia College, to chair the teacher education program and help to develop the college’s teacher licensure process. Even though Sohn had no higher education experience, he accepted the call and discovered a passion for teaching the next generation of teachers at Concordia College.

Sohn had a difficult time remaining behind the scenes because his gifts in education and servant leadership always shone through. He continued teaching throughout most of his tenure at the university, and no matter his title was tasked to lead Concordia through the ongoing assessment and accreditation process. Sohn would go on to serve as executive vice president and briefly as vice president of academics before his first retirement on June 30, 2005.

“My wife refers to this as my failed attempt at retirement,” joked Sohn. 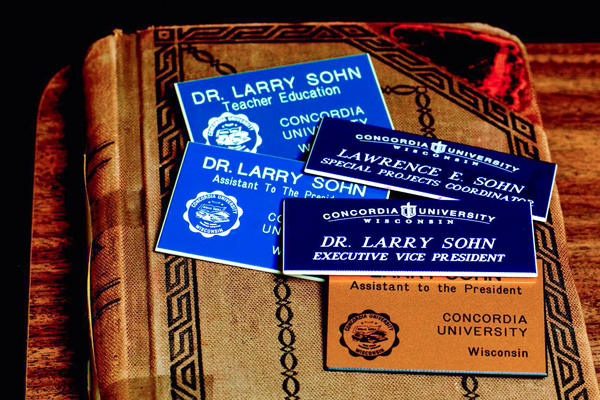 Dr. Sohn has held numerous titles during his tenure at Concordia University. Pictured are some of his titles over the years.

Within days of his retirement, his friend, President Ferry, invited him back to Concordia to expand the official archive department to meet the ongoing accreditation needs and to help future generations appreciate the cultural legacy of the institution.

It wouldn’t surprise anyone that Sohn has maintained a personal mission since his early teaching days: “Serving as a resource to others for a rich life in Christ.”

Sohn has been a beloved and trusted resource to students, faculty, and staff his entire time at Concordia. And, in return, his life has been richly blessed. He and his wife of 55 years, Ellen, have three living children and three grandchildren. They are active members of their church and in their community.

Among the treasures in the archives are faculty minutes dating back to 1890 (written in German script), records from the meetings of the Board of Regents, Concordia’s collection of catalogs since 1890, and files and files of photos and memorabilia that are carefully researched and labeled.

While much has changed since the university was founded in 1881, Sohn points out, and the archives support, that the culture at Concordia has remained remarkably steadfast throughout the decades.

“The mission of preparing pastors for seminary and professional church workers to teach and serve God and others has always been the primary focus,” reflected Sohn. “While our programs have dramatically expanded throughout the years, they have each been judiciously chosen to support our primary mission.”

Sohn will retire for the second time on June 30, 2017. In his new free time he intends to focus on his own family’s archives and the archives of his congregation. Because of his life’s work of documenting and preserving the things that matter most, Sohn’s own legacy is solidly planted at Concordia University within the archives underneath the chapel.

Freedom in the Gospel
previous story
A Transformational Experience
next story