When Lance and Julie Parve quit their jobs, sold everything they owned, and moved to Somalia, East Africa, with their 1½-year-old son, Jeremiah, many family and friends thought they’d lost their minds.

Fast forward 30-plus years: The couple and their three adult children have gone on more than 25 international mission trips— with 16 involving the Concordia community— and through their self-started nonprofit Hope Without Borders (HWB) have brought advanced technologies, modern medical practices, and engineering innovation to Africa to holistically help communities make lasting change.

“As Christians we’re compelled to help,” said Julie (’03/’09). “We’re just ordinary people whom God has called to be catalysts to make a difference and to encourage others to do the same.”

At the time, Lance, a geologist, and Julie, a surgical technician, were compelled to help but had reservations about moving their son to Africa, and agreed to pray individually for guidance. The couple found their answer in Luke 9:62: “Jesus replied, ‘No one who puts a hand to the plow and looks back is fit for service in the kingdom of God.’”

Upon reflection, they gave up everything and moved to East Africa. 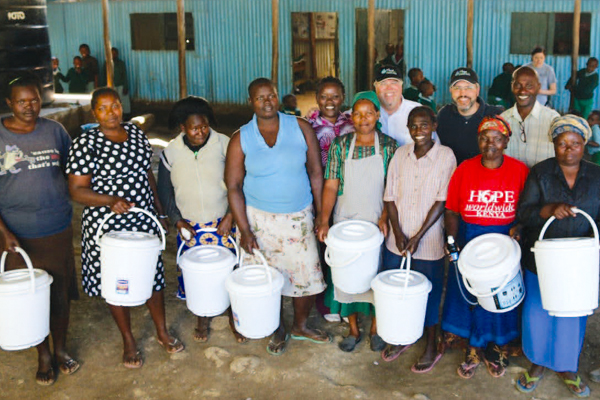 Families in the Mukuru slums in Kenya receive household water purifiers and training from Lance.

While in Somalia, Lance helped with engineering projects, Julie provided dire medical care, and little Jeremiah thrived among the villagers. Their second child, Jennifer, was born in Kenya.

After serving a two-year term, the family returned to Milwaukee to continue serving disadvantaged people in the central city, while getting advanced degrees and working full time. Lance earned a master’s degree in engineering and a master’s certificate in GIS, and Julie earned a Master of Science and a doctorate in nursing from Concordia. She started teaching for CUW soon after that. During this time, their third child, Josiah, was born.

The couple longed, once again, to leverage their combined skill sets internationally, and in 2007 they founded Hope Without Borders, with offices in Wisconsin and Nairobi. The humanitarian organization is entirely volunteer-based, so both Lance and Julie maintain day jobs to be sustainable.

The impetus of the organization is to bring hope to communities in need. They do this by leveraging resources in the U.S. to drill wells that become the life source of the community. They do this by raising money for home water purifiers that can sustain a family for 10 years. They do this by providing critical and sustainable hygiene solutions, like reusable sanitary pads and composting squatting slabs. And they do this through long-term commitments, a minimum of five years per community, so that residents learn the technology and teach it to others.

Over the years, as the Parves’ organization has grown, so, too, has their children’s commitment. All three have gone on to pursue careers in health care—two with degrees in nursing from CUW—and are leading HWB trips of their own. With four CUW alumni in the family (Jeremiah met his wife, another CUW grad, on a Tanzania trip) and Julie’s expanded teaching role within the School of Nursing, it was a natural evolution to combine forces, allowing nurse practitioners and nursing students to join them.

As Christians we’re compelled to help. We’re just ordinary people whom God has called to be catalysts to make a difference and to encourage others to do the same. Julie Parve