A natural, “non-traditional” connection to the community

Brian Morrison ('22), a "second career" undergraduate horticulture major at CUW, has already made his mark in the natural world of his South Milwaukee community.

As darkness fell on Milwaukee’s Grant Park last Sunday evening, a solitary raccoon slinked into a wastebasket, searching for scraps, oblivious to the 35 or so people gathered in the Wil-o-Way pavilion nearby. The people seemed oblivious to the raccoon, as well, for it was not four-legged mammals they were gathered to learn about. Rather, it was the winged variety. 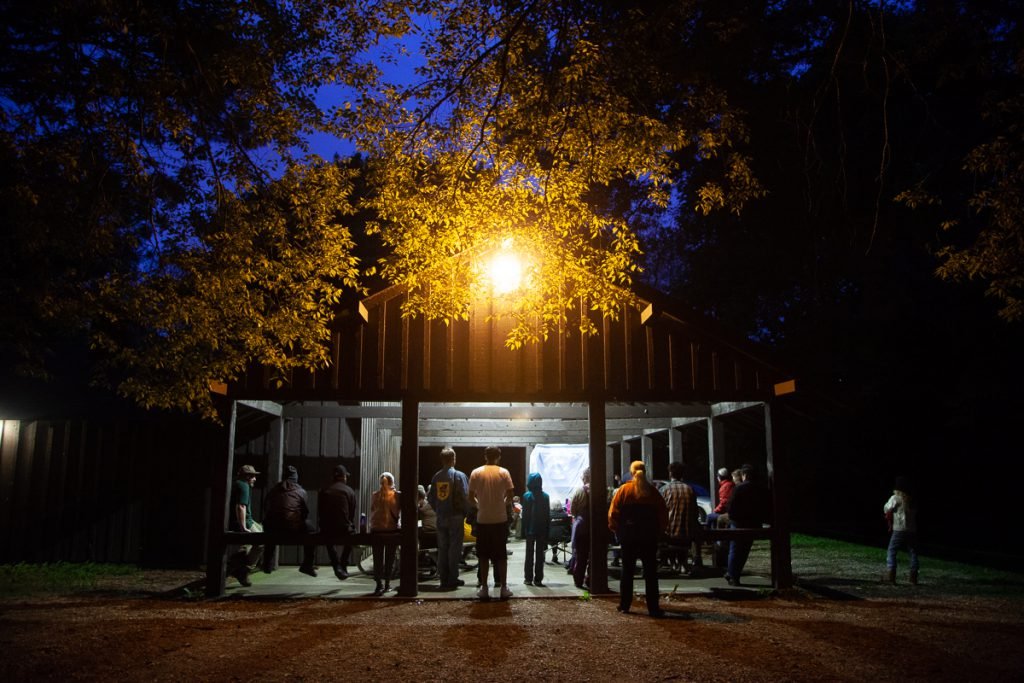 The session about bats was part of the Suburban Soles program, an initiative founded and run by Brian Morrison, a CUW student in the process of pursuing a “second career” in horticulture.

His first career … well, let’s just say he’s enjoyed a bit of an adventure. A musician by trade, he’s been a fixture in the Milwaukee music scene for quite some time, playing in various blues bands, touring around Wisconsin, Illinois and Minnesota. He has also worked in community outreach for the South Milwaukee Performing Arts Center (SMPAC), and as a booking agent. It’s a life he has loved, but also one that can take its toll on you after a while.

Following some personal change in his life, he started to ask himself what else he might enjoy enough to want to earn a living at it. The answer was the outdoors.

“I just love nature,” he says. “I’ve always loved nature. I think it stems from growing up with my grandfather, and going up north and spending summers on the lake and stuff like that. So I was like, you know what? I want to completely reinvent everything in my life—just to make things more complicated, of course!”

Having already earned a two-year degree in music from Milwaukee Area Technical College (MATC), he went back there to earn another in horticulture. Weighing his options when he was done, a teacher there told him about MATC’s “two and two” program with Concordia. All of his credits would transfer, so he would already be halfway to earning a bachelor’s degree. It seemed like sort of a no-brainer. This fall, he’ll finish up his bachelor of science in horticulture at CUW, which will also include a minor in biology.

Not just any walk in the park

In the meantime, he also got the idea to start the Suburban Soles program through the Friends of Grant Park. THe program, which is now in its fifth season, is free to the public. Morrison says the idea came to him when he was on a hike with friends and they started having questions about things they were seeing.

“I thought, wouldn’t it be cool if we had a guide to walk around with us and tell us about everything we’re looking at?” he recalls. “It got me to thinking, let’s put some community events together, network with different individuals and see who we can get to lead these tours and put it all together.”

This sort of thing was right in his “wheelhouse,” he says, as he was already experienced in community outreach through his music career and his work with the SMPAC. It was just a matter of putting those skills to work in another area of interest.

“It started out very grassroots—I don’t think we even had guides that first year,” he says. “I put it out on Facebook and social media, like, ‘Hey, let’s get together for a nature walk and learn this stuff on our own!’”

The following year, working in partnership with the Friends of Grant Park, they were able to secure funds to really start to build the program. He reached out to different nature organizations, such as the Mequon Nature Preserve and the Wehr Nature Center. In particular, he got a lot of help from a friend, Brooke Gilley, an environmental educator and naturalist at Wehr.

The 2022 schedule includes 11 different events, covering topics from migratory birds to wildflowers to “Formidable Fungi” and the aforementioned bats. Each session is led by an expert naturalist, with Morrison facilitating. Typical attendance is anywhere from 20 to sometimes 50 or more. By any measure, it’s been a very successful program, one he hopes will be around for a long time.

It should be pointed out, by the way, that Morrison’s time, passion, and enthusiasm are all provided on a volunteer basis. It helps him maintain his “master naturalist” accreditation, but it’s really just about the satisfaction he gets from giving of himself.

That attitude makes him a natural fit at Concordia. Morrison says he has really enjoyed his experience here, even saying the faith-based classes have inspired him to make God a bigger part of his life. Dr. Tom Saleska, professor of science, who taught Morrison in two biology classes, believes he’ll be successful at whatever he plans to do next.

“I think it takes a lot of courage to do what he’s doing, knowing he’s going to be in class with 18, 20-year-old students—that can be kind of intimidating,” Saleska says. “But he turned out to be an excellent, excellent student, extremely hardworking and dedicated. He really put his heart and soul into it.”

After he’s done at CUW, Morrison plans to pursue a master’s degree in natural resource management with a goal of one day becoming a director of a nature center. He also recently accepted a part-time position as community engagement and events manager at Forest Home Cemetery and Arboretum (he’ll go full-time when he graduates).

It’s been a very “non-traditional” path, you might say, but that’s just the way Morrison likes it.

“I’ve never been one to get a job just for the paycheck,” he says. “For me, it’s more about the passion projects, about doing something for other people, something for the community. Like, I love just connecting with people and improving people’s lives any way that I can.

“We’re all humans and sometimes we have to stop and remember to have joy, to do the joyful things in our lives, and to appreciate nature, or whatever it is that we find beautiful.”

And sometimes, such as on a cool and cloudy Sunday night at Grant Park, that beauty can be found in learning about more than 1,400 species of underappreciated flying furry creatures of the night that pollinate plants (did you know that?), spread seeds, and help control the mosquito population. 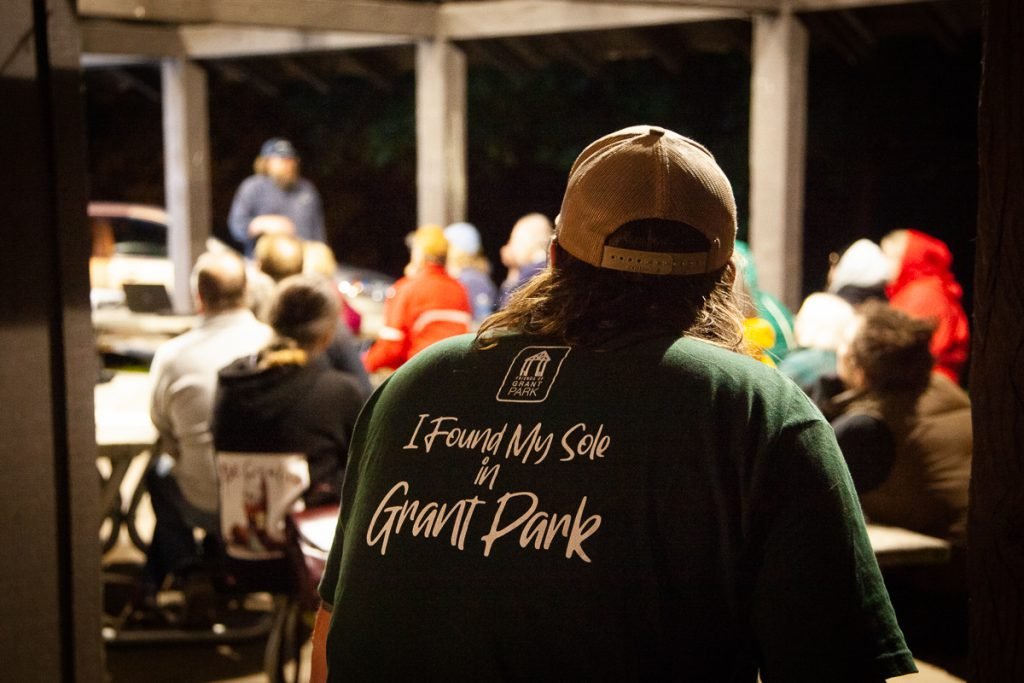 The Suburban Soles program was recently featured in the Milwaukee Journal Sentinel, with a heavy focus on Morrison’s efforts.

Click here or on the image below to read the full article. 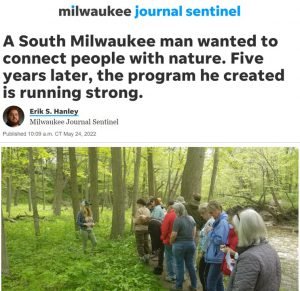 For more information about studying horticulture, environmental science, or other natural fields at Concordia University Wisconsin, visit the Department of Life and Earth Sciences at cuw.edu.

The many lives of the house at the front entrance of campus
previous story
From downtown to lakeside: The 1983 move to Mequon impacted CUW in big ways
next story