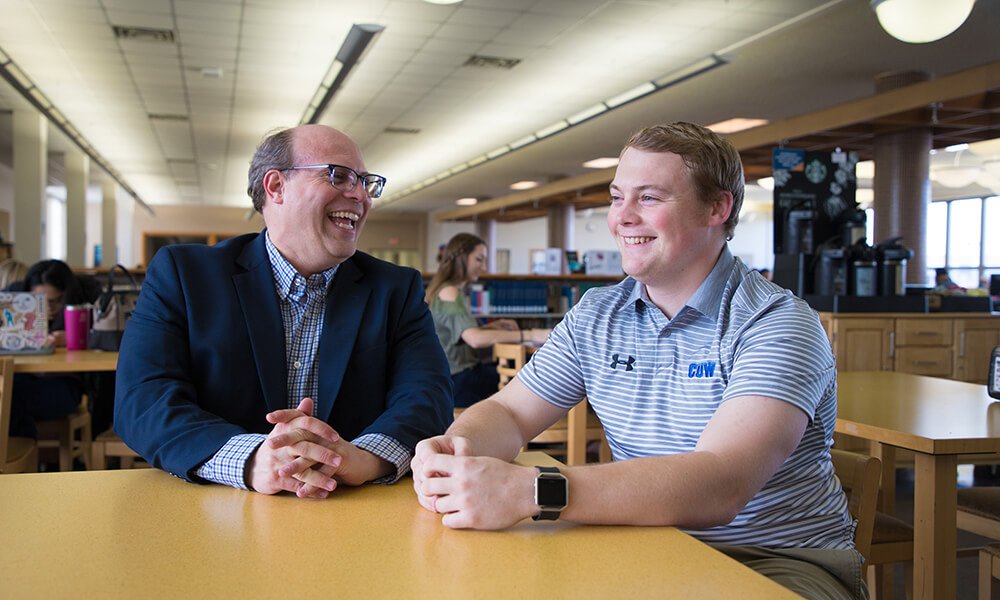 Editor’s note: Josh Pingel is one of 461 graduates who will cross the stage tomorrow during Concordia’s December commencement ceremony, which begins at 1:30 p.m.

The Minnesota school has contracted Josh Pingel to teach its sophomore, junior, and senior history classes. It’s a role the rising Concordia University Wisconsin graduate is perfectly primed to embrace, because, for the past five months, he’s taken on the class load as a student teacher.

RELATED: You can view Concordia’s commencement ceremony from home. Click here to watch the livestream of graduation once the ceremony begins.

The Mayer Lutheran position is a familiar one for the Pingel family. A little more than 25 years ago, Josh’s father, Concordia’s Dean of Education Dr. James Pingel II (’92, ’01), also began his first job as a history teacher at Mayer Lutheran.

The Pingel men not only share the same first school and same subject, Josh has even settled into his father’s former classroom and picked up a basketball coaching responsibility for the school.

“I made the decision to go to Mayer on my own. It didn’t really have anything to do with my dad being there, but it is kind of crazy how it’s all turned out,” Josh said.

Even though Josh was born in the Mayer area, he doesn’t have many memories of the city. He was 6 years old when his family moved from Mayer to Sheboygan, where Jim served as Sheboygan Area Lutheran High School’s executive director for several years. Still, Josh said he has appreciated returning to a place that holds some familiarity.

“It’s been nice to have some people that I can reach out to,” Josh said. “My dad said that about half of the teachers currently on staff were around when he was there and there are a lot of families in the church who have remained.”

Josh said he feels more confident heading into his first official semester as a teacher since he’s already had a few months to gain his footing at the school.

It’s not typical for a CUW student to travel out of state for his student-teaching experience, nor is it common that the placement site advisor is the school’s principal. But when Mayer Lutheran found themselves without a history teacher for the 2019-20 academic year, they reached out to Concordia’s student-teacher coordinator for an uncharted solution.

“With the teacher pool shrinking, I anticipate we’ll continue to get more requests like this,” Concordia’s education dean said. “It’s got to be the right fit for the student, and the Concordia advisor and department chair certainly have to feel the student is comfortable handling the situation, but it does give schools a chance to test the waters and see if it’s a good fit, and it gives our students a chance to kind of practice big-time life decisions.”

For Josh, he’s had the benefit of “practicing” his future vocation throughout his life. He’s gained insights from both his dad and mom, Michelle Pingel (’93), who teaches first grade at St. Paul Lutheran in Grafton, Wisconsin.

“I’ve actually taken a lot of inspiration from my mom even though we’re at different grade levels,” Josh said. “Just how much patience she has and how much she cares about her students… She’s shown me that it’s not just a job, it’s something you love and you care about.”

Jim is to credit for Josh’s appreciation for history. Growing up, hardly a vacation went by without a stop at a historic site.

“There’s a big long list of battlefields that I’ve visited,” Josh said with a smile. “I guess when you’re around history so much, it’s hard not to love it and appreciate it.”

And when you’re around a school community that once welcomed your parents with open arms, it’s hard not to feel a sense of belonging.

“There are a lot of people there that we knew well and that are still on our Christmas card list,” said Jim. “He’s living in an addition of one of our close friends, the Lanes. The faculty members have invited him over for dinner, and some of the veteran teachers have really gone out of their way to make him feel welcome, so we appreciate them looking out for our boy.

“It’s just a great area and a very supportive community, and it’s been fun to watch him experience that,” Jim continued. “He’s not only living his dream, but it’s allowed me to relive my dream a bit too.”

Click here to learn more about Concordia’s School of Education.