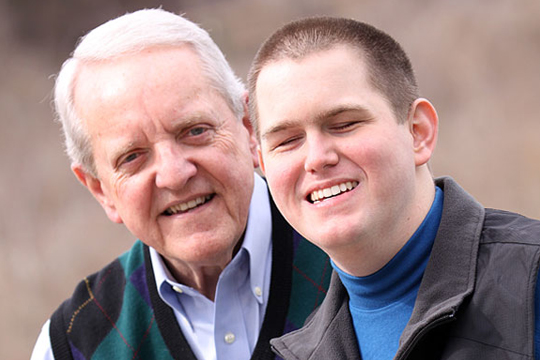 H.K. Derryberry, a 27-year-old motivational speaker from Nashville, Tennessee and his friend and mentor Jim Bradford, a retired business man from Brentwood, Tennessee.

H.K. Derryberry, a 27-year-old motivational speaker from Nashville, Tennessee and his friend and mentor Jim Bradford, a retired business man from Brentwood, Tennessee, will be the featured speakers at Concordia University Wisconsin’s third annual Disability Awareness Day on Monday, Oct. 9, at noon in the Albrecht Lounge on the university’s Mequon campus, 12800 N. Lake Shore Drive.

Born premature, legally blind and with cerebral palsy, Derryberry was raised by his grandmother after losing his mother to a car accident and being abandoned by his father at age 5. Through this tumultuous time, young Derryberry received physical therapy at the Vanderbilt Medical Center in Nashville. The clinical coordinator of pediatric rehabilitation at the time, Dr. Robert Barnhart, is now a professor of physical therapy at CUW and the faculty member who nominated Derryberry and Bradford to be the featured speakers.
“H.K. was always a positive kid,” said Barnhart. “His grandmother was a strong, supportive caretaker who sacrificed everything to encourage him to stay committed.”

His grandmother wasn’t the only person who would help Derryberry become the man he is today. To make ends meet, Derryberry’s grandmother worked weekends at a diner in Nashville. Throughout his childhood, Derryberry spent those long days sitting at a table in the corner of that restaurant listening to his boombox radio. One Saturday morning in 1999, Bradford visited the diner, noticed Derryberry sitting alone, and felt compelled to meet the then 9-year-old boy. That meeting turned into a deep mentor-friendship that changed both of their lives.

At the age of 10, Derryberry began displaying a remarkable ability to recall dates and other facts surrounding events in his life. In 2012, it was discovered that Derryberry is one of only five or six people in the world with a medical diagnosis of hyperthymesia, otherwise known as Superior Autobiographical Memory.  He has the ability to remember every event that’s occurred in his life since he was 3½ years old.

With Bradford by his side, Derryberry has gone on to live a unique and productive life. Their 18-year friendship is documented in a book entitled, “The Awakening of H.K. Derryberry,” and the two of them will share their inspiring story as the keynote speakers at Disability Awareness Day.

The host committee of Disability Awareness Day consists of students and faculty representatives from each of the university’s six academic schools.  According to Pollyanna Kabara, professor of physical therapy at CUW and event organizer, “We are excited to show our students and the community how disabilities can open doors to new friendships and inspiring experiences.”

The event is free and open to the public. Derryberry and Bradford will speak from noon – 1 p.m. on Oct. 9. Attendees are encouraged to bring a lunch. For more information, contact Pollyanna Kabara at 262-243-2016 or pollyanna.kabara@cuw.edu.