Called to his heavenly home

The reputation of Rev. Dr. John W. Saleska was such that even in a room full of pastors, people would often look to him when it came to matters of theological expertise.

His knowledge of Scripture was evidenced in the well-worn pages of his personal Bible. Saleska’s decades-old King James Version—the version used in heaven, he liked to say—was brimming with highlighted passages; handwritten notes were scrawled in every available margin.

He could recite Scripture from heart with deftness. He would record podcasts without any notes, speaking into the microphone as if he were reading passages off the wall in front of him. 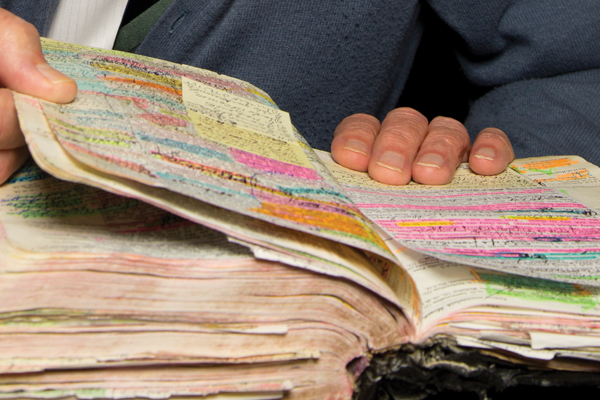 This King James Version Bible of Dr. Saleska's was a gift from his father in 1949, when he graduated from St. Paul's Jr. College in Concordia.

On Tuesday evening, his tireless dedication to the Gospel mission here on earth was finished. Saleska was called to his heavenly home at the age of 87. He is survived by Sallie, his wife of 63 years, four children, 13 grandchildren and 12 great-grandchildren. Among his relatives are Concordia employees Dr. Tamara Ferry, Concordia’s director of institutional research and the president’s wife; Dr. Tom Saleska, professor of science and head men’s soccer coach; John T. Saleska, assistant men’s soccer coach; and Rachel Ferry, manager of campus communications.

“He is one of the most remarkable people that I have ever known,” says Saleka’s son-in-law and Concordia University Wisconsin and Ann Arbor President Rev. Patrick T. Ferry, Ph.D. “His love for Christ, his family, and for sharing the Gospel will ever endear him to many.”

Saleska is perhaps best known at Concordia for pioneering and shepherding the Concordia Bible Institute after he “retired” in 2000 from his longtime faculty position at Concordia Theological Seminary.

The mission of CBI is to provide Christ-centered Bible instruction from distinguished experts who teach “Christ in Every Word” of the Old and New Testaments, to strengthen faith and spread belief in the one true God. During his years as director, Saleska made good on this mission by traveling across the nation, as well as locations around the world, including Germany, Finland and Russia, to lend his expertise and offer resources.

Today, the institute—now led by Dr. Brian German—continues to expand upon the foundation laid by Saleska. CBI regularly hosts a series of face-to-face events, such as in-depth Bible studies and seminars, and it offers educational resources, such as podcasts, a DVD on the Pentateuch and other publications addressing various biblical passages and topics.

Even after retiring for a second time in 2014 from his position as director of CBI, Saleska maintained an office on Concordia’s campus and regularly contributed to the efforts of the institute as director emeritus.

“His joyful confession of the Gospel, along with his zeal for studying God’s Word unto life’s end, make it difficult for me to imagine a more inspiring churchman,” says German. “Far more than just a predecessor, he was a cherished father in the faith. I will miss him greatly.”

Learn more about the institute begun by Dr. Saleska at www.concordiabible.org.