What does it take to cultivate a sense of belonging among students?

If there’s anyone who knows the answer it’s Director of Residence Life Beckie Kruse. After seven years in the director’s seat overseeing CUW’s eight residence halls, a staff of six RDs, and an ever-evolving roster of 54 student RAs, Kruse knows a thing or two about laying the groundwork to help students feel at home. Yet, even Kruse still earnestly searches for new and improved ways to reach even more Concordia students.

That’s part of the reason why she started the Diversity Advocates (DA) program last fall. Following a June 2019 Association for Christians in Student Development conference that Kruse attended, she set to work to adapt and implement some of the best practices and novel ideas of peer Christian institutions around the nation.

Kruse invited all Concordia RAs to participate in the program she piloted last fall, which has a mission of helping students of all backgrounds, specifically students of color, feel a sense of belonging at Concordia. Four RAs immediately stepped up to the plate, and this year, the program has grown to include 10 DAs total: Lily Kate Burreson, Brianna Dorpat, Megan Felsch, De’Shawn Ford, Yannik Gruner, Andrea Ledvina, Gabrielle Pavlik, Kate Miklosz, Rayanna Stamps, and Abigail Tadesse.

The DAs meet monthly with Kruse to discuss an assigned reading or educational material. Kruse ends each session with a challenge for them to apply.

“The mantra we leave with each time is ‘listen for the voices not heard and look for the faces not seen,’” said Kruse. “We came to a consensus that, at Concordia, we’re really nice to people and so we don’t often confront each other, but sometimes there needs to be a leader who can initiate tough conversations so that we’re challenging each other to grow and not leaving anyone forgotten.”

Eager to expand the group’s reach and visibility on campus, Lily Kate Burreson approached Kruse over the summer with an idea to feature Concordia’s diversity through art. The first two installments of The Bridge, as it’s called, went up today in the overpass between Barth and Wittenberg Hall.

Burreson and the DAs began by soliciting “stories of diversity” from RAs, and will expand the submission pool in the upcoming months. The DAs selected notable stories from among the submissions and paired them with a CUW student artist who then worked to depict the story through a chosen medium. Burreson hopes to gradually increase the collection until it fills the wall space in the overpass.

“The biggest goal is to help everyone appreciate diversity and celebrate that, while we have differences, we’re one Concordia community and we’re all created in the image of God,” said Burreson. 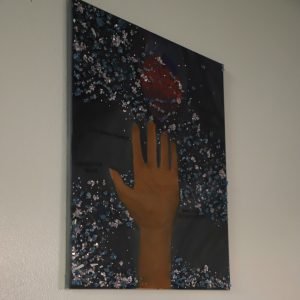 The first two CUW students to be featured—Bri Dorpat and DJ Ford—came from within the DA fold. Their stories were depicted by Bri’s brother, Justin Dorpat, and Jasmine Bell, respectively.

“When Lily Kate reached out to me about this project, I was instantly on board,” said Justin, a freshman nursing major. “For me, taking words written on paper and turning it into artwork is such a powerful thing. It’s not every day that I am able to take these types of emotions that people feel and showcase them to the world.”

Justin put his photography skills to use for the project. Two of his pieces were hung in the overpass: one, a combination of images portraying the subject’s introspection and confusion; the other, a depiction of isolation.

Bell, a freshman healthcare management major, used acrylic paint and shards of colored glass to portray Ford’s story. Prior to The Bridge Initiative, Bell and Ford formed a bond over some of their shared childhood experiences and their common interest in evaluating the psychological effects of them. 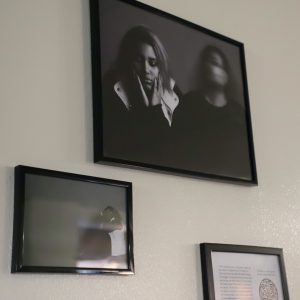 “Social norms have created an expectation for men to downplay their emotions so they aren’t portrayed as ‘weak,’ but the suppression of emotions can have implications on a person’s mental health,” said Bell. “No matter who we are, we are bound together as human beings in our desire to express our feelings in some way, shape, or form. Hopefully my painting can exemplify the normalcy of that and the importance of allowing people to share their emotions without the fear of judgement, manipulation, or ridicule.”

To learn more about the subjects’ stories, Concordians can visit the pieces and scan the QR code next to the artwork. If you have questions or want to have your story shared through art, contact Lily.Burreson@cuw.edu.