Aftershock author talk: Concordia welcomes co-authors of book about the cost of war

On Tuesday, March 25th, nearly 100 CUW students, staff, veterans, and community members gathered to hear authors Richard Cahan and Mark Jacob give a sneak peek of their book on WWII. Titled "Aftershock: The Human Toll of War," the book is a collection of photographs, some never before printed, taken by U.S. Army photographers in 1945.

“A history book, an essay of sorts”

Cahan and Jacob, both journalists and former employees of the Chicago Sun Times, along with Michael Williams pulled the photos from the National Archives in Maryland and used the information from the photos to curate detailed captions for each of the selections. As a former photo editor, Cahan sifted through more than 200,000 negatives (with capabilities to only scan 10 at a time) to find the best photos to show life throughout 1945 on the front lines. The goal of the book is to show how extensive the effects of war can be through photos of combat, camaraderie, and community.

These single corps photographers were not professionals, but some of the moments they captured are chilling, Cahan observes. While a soldier may be on the front for a few days at a time, soldier photographers were there for months or years. They were dedicated to capturing moments that would otherwise be lost to history. These men held their cameras closer than they did their firearms. Not only did they photograph grim images of the front lines, they captured moments of triumph and cheer.

One image features a marriage between a Japanese prisoner and a local woman. Another depicts four soldier photographers in front of the Arc de Triophme in Paris.

The authors wanted to curate a tribute to these army photographers and “tell it in [the photographers’] words.”

Cahan and Jacob let the photos lead their research for the book. They spoke passionately about reviving old stories and connecting with the people who still remember them. None of the photographers featured in Aftershock were still living, so they relied on the families to supply details and personal stories. Both Cahan and Jacob candidly recalled how connecting with some of the families impacted them.

Cahan, whose father was a physician in the war, had a more personal connection to one of the stories they unearthed. After finding a photo of a clearly starved woman on a bunk, the authors procured records that Cahan’s father had treated a group of women left for dead in a barn in Germany. Cahan had been searching for information on his father, but he never imagined such a personal story. The discovery was complete happenstance, as Cahan’s name was spelled incorrectly on the photograph.

Tears welled in Cahan’s eyes as he recounted the story in front of the Concordia audience.

Cahan, Jacob, and Williams have curated a collection of photos that tell a story beyond the ink on the page. They tell a story of the men behind the camera and the men on the front.

“These men left behind a remarkable lesson for us today,” Cahan told those gathered. “War should always be the last resort.”

Concordia has a selection of images from Aftershock displayed in its 14 Frames Gallery on campus. Students and community members are invited to view the photos during regular gallery hours.

“What they took belongs to all of us.”

Cahan and Jacob spoke with Lake Effect’s Audrey Nowakowski about Aftershock on UWM’s WUWM 89.7 radio. Click below to listen. 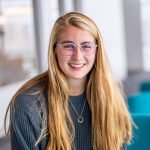 — Madelyne Arrigoni is a junior studying English, Mass Communications, and Photography. She plans to graduate in 2022.