8 things I learned competing in the Olympic trials

On January 7, 2022, Ellie Fuchs (’24), a CUW healthcare administration major and women’s lacrosse player (who was fresh out of quarantine!), made Concordia proud by competing in her first Olympic speedskating trials.

With the 2022 winter Olympic games opening on February 4, we thought we’d check in with CUW’s star speed skater. Though Ellie has a ways to go before making the Olympic team is a realistic possibility, she skated a season-best 41.88 in the 500-meter race at the Olympic trials—despite receiving a positive Covid-19 test result just weeks before the competition! We asked her what she learned through the whole experience, and here’s what she had to say.

1. When things don’t go as planned, you do what you have to do. 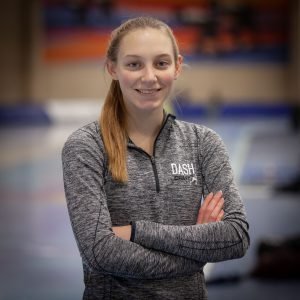 When I got that positive COVID test less than two weeks before the trials, I thought at first it meant I wouldn’t be able to compete. I sat in my room and cried. I was devastated. I thought, I had been training for so long, and now I wouldn’t be get the chance to compete.

But then it turned out my quarantine period would be done just in time; in fact, it ended the day before I raced. Still, I had to find ways to train and stay strong, even when I was in isolation and not feeling very well. I did exercises in my room. I went outside and went for walks, to get my legs moving and get some fresh air. Later, I had to find ways to skate. I trained at the Pettit National Ice Center, with just my coach, at 6:30 in the morning when no one else was there because they wouldn’t let me skate with others (the lights were off!). I found ice time at hockey rinks. Whatever I had to do.

My family and friends were amazing during my quarantine! It wasn’t just my mom and dad taking care of me. It was people like my dentist reaching out with advice about vitamins from his daughter, a nurse. My coaches called me every day to ask how I was doing. And they brought over exercise equipment to put in my room—all on their own time. All of that definitely contributed to how well I did at the trials.

3. There are a lot of distractions at big-time events—especially for a first-timer.

Because of the spike in COVID cases right before the trials, spectators were not allowed at the trials this year. This was obviously very disappointing, because it meant my parents couldn’t be there to cheer me on. I also had other friends and family members who had planned to come and now wouldn’t be able to.

Even so, there was a lot going on. Aside from that emotional adjustment I had to make, there are lots of reporters, and photographers, and TV crews, and interviews going on all the time. Not to mention all the fastest skaters in America. I’m used to showing up at the rink and just racing—with people taking pictures on their iPhones. This was very different, and very exciting! But it’s also something I just had to tune out.

4. Different athletes have different ways of getting dialed-in.

One reason I was very glad to be able to race was because I wanted to see how the top skaters prepare, and how they race when the stakes are high. I was one of the first to skate in my event, and when I finished I could have packed up and left, or watched from the stands. Instead I stayed and watched from close-up. I wanted to see what these soon-to-be Olympians were doing for their warmups and stuff. Were they listening to music? Were they talking and chit-chatting? Were they by themselves getting focused, zoned in with their game face on? Were they talking to their coaches about strategy and technique?

The answer is all of the above. But I think more of the top athletes, especially the ones who finished top three, were very game-faced and focused. Others, who maybe didn’t think they had a shot at making the team, were more relaxed and loose.

5. These skaters are fast! But I still have time to catch them.

At just 20 years old (I was actually still 19 during the trials), I’m just a child in speedskating years. Erin Jackson, ranked #1 in the world in the 500 meters (see #6), is 29! Two Olympics will come and go before I reach that age. There’s time.

6. Nothing is guaranteed. Even if you’re the best in the world, you still have to race the race.

In my event, the 500 meters, everyone expected Erin Jackson to not just qualify, but to win. But then she stumbled during the race and slipped to third place, when only the top two qualified. Fortunately for Erin, her friend Brittany Bowe, who finished second, gave up her spot to concentrate on the longer races (which she’s better at). So it worked out for Erin this time, but it shows that there are no guarantees. The best skater doesn’t always win.

It’s even more clear to me now how hard these world-class athletes train and how dedicated they are to always getting better. If I want to continue on this path—and I do!—I’ll have to make some decisions going forward. For instance, do I want to keep playing lacrosse for Concordia? I may have to choose. Or even, should I consider going to school just part time, especially in the fall, when the skating season is going strong? I saw first-hand how these athletes trained like professionals. It takes a lot of hard work, focus, and commitment.

8. My experience this time will help me next time. And there WILL be a next time!

Getting my first Olympic trials under my belt is HUGE! In 2026, I will be one who’s been through it all before, instead of a wide-eyed rookie (who’s just getting over Covid-19!) who’s kind of in awe of everything. I’m very proud of how I performed on the ice, and more excited than ever to see what the next four years (8 years? 12 years?) will bring.

For more information about CUW Athletics programs, or the Batterman School of Business, visit cuw.edu.

What makes a great teacher? 4 Traits to consider
previous story
What jobs can you get with a master's degree in Digital Humanities?
next story