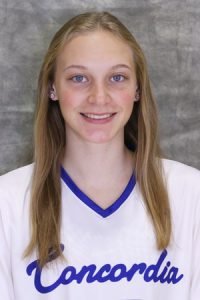 There’s an adage in sports: “You can’t teach speed.” And while there’s some truth to that, it’s clearly not entirely true. Speed starts as a gift; but it’s what you make of it that counts.

Take Eliana Fuchs (’24), a sophomore lacrosse player at CUW studying healthcare administration in the Batterman School of Business. Ever since she was a kid playing soccer, hockey, and pretty much whatever else caught her attention, it was her speed that caught the attention of coaches. It led to success in track and field in middle school, and later in lacrosse and hockey in high school.

At Concordia, she was named second team all-conference in lacrosse her freshman year. Again, it’s her speed that makes her special.

“Her speed is incredible,” raves CUW head women’s lacrosse coach Emily Schoessow. “That’s not only a testament to her natural athleticism, but also a product of her competitive spirit and work ethic. She is able to kick into an even higher level when she is being challenged one on one.” 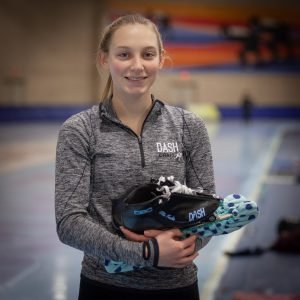 But that’s only part of the story. Four years ago she decided to try a different track by turning her hockey skating speed to speedskating at the world-class Pettit National Ice Center in Milwaukee. Just three years later she was turning in 500-meter times fast enough to qualify for the 2022 U.S. Olympic speedskating trials, January 5-9 at the Pettit Center.

“My coach reached out to me and he asked me if I wanted to try it, and I ended up really liking it,” Eliana says. “And I thought, this is something that I can continue beyond college.”

The potential for a longer career was a big part of the speedskating appeal. Sports like lacrosse and hockey tend to pretty much stop after college, but speedskaters are just getting started by then. Some members of the U.S. national team compete well into their 30s, Eliana points out. And she’s still got some growing and developing to do before she reaches her peak.

So far, juggling school and lacrosse and speedskating has been challenging, but manageable. In fact, she’s succeeding in all three areas. In addition to her lacrosse honors, she’s on the Concordia Scholastic Honors List, and just making the Olympic trials at this point in her speedskating career is a real accomplishment.

Her training schedule can get very hectic, as it involves driving from Concordia to the Pettit Center (about 25 minutes each way, not counting traffic delays) five or six days a week. When lacrosse starts next semester, things will get even more crazy as she goes full speed in two sports at once, plus school, until speedskating eases up in March.

“I think I would like to continue four years of lacrosse here, and then continue speedskating beyond those four years,” Eliana says. “Once I get to be a junior and senior, and I start taking harder classes, I might have to make some decisions, but I haven’t really thought about that yet.”

There’s also an upside to keeping so busy.

“It’s taught me a lot, as a student, about discipline and responsibility, and those are always good skills to gain,” she says.

She has great role models in her parents, Kent and Lisa Fuchs. Eliana credits her mom, in particular, for inspiring her to study business and instilling her best qualities.

“My mom is an accountant, and I see what she does at Northwestern Mutual, where she works,” Eliana explains. “I think I get a lot of my best qualities from her, like my work ethic, my sense of responsibility, and my organizational skills.”

Eliana also gets great support from her older brother, Alex, a senior at Milwaukee School of Engineering, and her younger sister, Bella, a seventh-grader at Wisconsin Hills Middle School in Brookfield. All three grew up playing hockey and remain very close. In fact, one main reason she chose to attend Concordia was to remain close to her family.

“I’m very family-oriented,” she says. “I wanted to be away from home, but still close enough to home where I can go and visit if I needed to, or if I needed something.”

And it’s nice having them be able to come to games and races, too.

“My parents are a huge support system,” Eliana says. “I look forward to seeing them, like when I’m going to the line for speedskating. And I can hear my dad, every time, when I get to the end, so I really enjoy that.”

On the Fast Track

The farther she goes in speedskating, the greater commitment she’ll have to make. As a member of the U.S. national junior developmental team, she’s on the right track. How far she wants to go is something she intends to evaluate on a year-to-year basis.

“I think it’s every speedskater’s dream to say they want to go to the Olympics, but obviously it’s about having that balance: Do you want to commit to it?” Eliana says. “Because it’s a huge commitment, and it’s a lot of work to become that elite athlete at the Olympian level.”

But one person who’s confident she can handle it all, if she so chooses, is Coach Schoessow.

“Ellie is a relentless competitor, and her work ethic and determination are incredible,” she says. “She’s the type of player that does not quit and will do whatever it takes to be successful on the field. She is tenacious during practices and games and really sets the pace for our team.

“She’s also the type of person who, even though she so much on her plate, she always shows up to work hard and never complains. I’m confident that this attitude will allow her to be successful not just in her athletic pursuits, but also her life and career endeavors.”

So, can you teach speed? Eliana is counting on it. She’s proof that you can coach fast athletes to have better technique. To get stronger as they grow. To train effectively and stay focused. To get faster, and faster, and faster.

And, maybe someday, to take that speed all the way to the Olympic games.

To learn more about CUW athletics or the Batterman School of Business, visit cuw.edu.