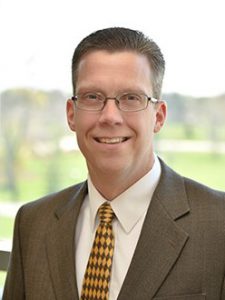 During the Covid-19 pandemic, there is perhaps no one who answered the call of service to a greater extent than Dr. Michael Brown. In addition to serving on the Concordia Covid Task Force, he has been integral in coordinating numerous vaccination clinics to provide literally thousands of Covid vaccines, not only to the CUW family but to community members at large.

He has been accessible, collegial, and informative in helping to educate our Concordia community on the science behind Covid and the Covid vaccines through numerous online and in-person information sessions. He has also made similar presentations to local churches and schools to help them make informed decisions about how best to protect their own communities. He has risen, on behalf of Concordia, to the challenge presented by the Covid pandemic, and in doing so humbly exemplifies Concordia’s mission to “serve Christ in the church and the world.”

Of course, it is not only for his pandemic efforts that we commend Dr. Brown, who has set an academic example worthy of respect and emulation. He has been with the School of Pharmacy from its very beginnings, serving as Associate Dean of Academics since 2013—which also included taking on the duties of Interim Dean in 2020. He has been a full professor since 2014, with a special interest in teaching medical literature evaluation and pharmacy calculations.

He has served on many committees over the years and received multiple awards from the American Association of Colleges of Pharmacy, including the Excellence in Assessment Award in 2015 and the Innovations in Teaching Award in 2002 and 2006.

In the community, he is an active member at Grace Lutheran Church in Grafton, Wisconsin, where he regularly attends worship services with his wife of 26 years, Kathy, and their two sons, Joseph and Joshua. He also sings in the adult choir, takes part in the Sweet Vibrations and Hymndingers handbell choirs, and plays on the church men’s softball team.

Despite all of his accomplishments, Dr. Brown does not seek extra recognition or acclaim for his service. Rather, he models a Christ-like humility, considering all that God has put before him to be both a privilege and a blessing. 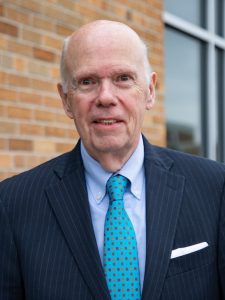 The Christo et Ecclesiae award is given each year to an individual who has demonstrated a high and unusual interest in advancing Christian education by using the talents which the Lord has endowed. This year’s recipient is Mark Polzin.

As one of the last graduates of the Concordia high school in 1963, Polzin has very deep Concordia roots. After Concordia, he earned an economics degree from the University of Wisconsin-Milwaukee in 1967, then received a J.D. degree from Marquette University Law School. He spent many years in banking, wealth management, and later as a consultant.

In more recent years he has filled a variety of leadership roles within the Concordia University System. At Concordia University Wisconsin & Ann Arbor, he served nine years as Regent, including five as the chairman. He then served six years as an Advisory, before being appointed as Regent again in 2020. These were all very constructive years for Concordia, which saw the completion of the Concordia Center for Environmental Stewardship, the creation of the School of Pharmacy, the merger with Concordia University Ann Arbor, and the completion of many other construction and improvement projects. He has also been on the CUW Foundation board since 2011, serving as vice-chairman or co-chairman for four of those years.

Other non-profit endeavors have included serving the Girl Scouts of the USA in multiple capacities, including serving on the national board, on the executive committee, as the finance committee chair, and as investment committee chair. He has also been board chairman of the Grand River Academy, a boys boarding school in Austinburg, Ohio.

Polzin has been very active within the Lutheran Church-Missouri Synod, serving as an elected delegate to several LCMS district conventions and two national conventions. He has been president of four LCMS congregations, along with filling other office position, as well.

Mark and his wife Jeanne have been married for 54 years, residing now in North Port, Florida. They have one son, Andy, who has a career with a firm that builds robotic testing equipment for the medical and pharmaceutical industries. Andy is married to Marissa and they have three children.

In honor of his life of service and commitment to God, to Christian education, and to the LCMS church, Mark Polzin is this year’s recipient of the Christo et Ecclesiae award. 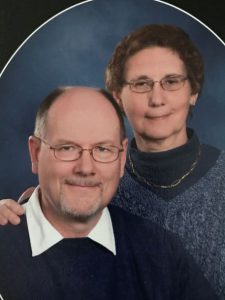 The Distinguished Alumni award is traditionally presented during spring graduation to a former Concordian who has consistently demonstrated faithful stewardship of his or her talents and has rendered notable service to the Church and the university. This year, we’re delighted to say we couldn’t decide on just one recipient, so we chose two: John and Virginia Oberdeck.

John and Ginny, as she is usually called, met in 1968 when they were juniors in high school. They went on to attend Concordia Junior College, where they both graduated with an associate in arts degree in 1972. After dating for six years, they married at Trinity-Freistadt Lutheran Church in Mequon, where Ginny was teaching second grade. They have three children—Andrew, Debbie, and Christy (who is a 2007 alumna herself)—and seven grandchildren.

The couple’s vocational paths took them to different schools after graduating from Concordia, but they each chose roles within the church. Ginny became a special education teacher for LCMS schools, retiring in 2014 from Our Redeemer Lutheran in Wauwatosa, Wisconsin. Along the way, she also took positions as a teacher’s aide and grade school teacher; worked at the Concordia Historical Institute; and became assistant editor for the Concordia Journal. In 2001, she earned her master’s degree in education from Concordia Chicago.

John went on to earn a bachelor’s degree in biblical languages, a master’s and doctorate in educational psychology, and a master’s of divinity from the Concordia Seminary in St. Louis. He served in several capacities, including as an LCMS pastor, a seminary professor, and a university professor, most recently at Concordia University Wisconsin.

In addition to serving God’s children in vocational roles, the Oberdecks have also volunteered their time in countless ways through their local congregations, the church-at-large, at the synod level, and on a variety of committees and in organizations. Both individually and as a devoted couple, they provide stellar examples of what it means to serve Christ in the church and in the world, and to love the Lord with all your heart, mind, soul, and spirit.