Women and Men Together Again

Evelyn Baisch was attending a public high school in Wauwatosa more than 50 years ago, when she heard the news that Concordia College was “going co-ed.”

As a teen, Evelyn felt the prompting of the Lord to pursue a career as a Lutheran secondary teacher. She had longed to attend a Lutheran high school, but her family wasn’t able to afford tuition for both her high school and college educations.

The timing of the Concordia announcement, therefore, couldn’t have been more perfect for Evelyn.

“Concordia Milwaukee opening right then allowed me to go to a Lutheran school,” she said. “That was definitely God’s gift to me.”

Dozens of other women flocked to Concordia that year as well. Two years later, they became the first group of women to graduate from Concordia College, Milwaukee. In total, the Class of 1967 included 145 graduates, 58 of them women. 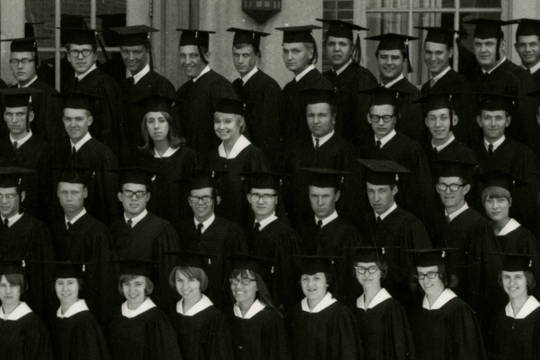 The Concordia College, Milwaukee Class of 1967 on commencement day 50 years ago.

Fifty years later, members of that class will soon reunite on Concordia’s Mequon campus. The anniversary event will be held May 11-13 and will coincide with Concordia’s commencement weekend.

Terry Donovan, a 1967 graduate and president of Concordia’s Board of Regents, will be honored as the 2017 Distinguished Alumni of the Year during the weekend’s events. The entire 1967 class will be recognized during the 10 a.m. Baccalaureate Service on Saturday, May 13.

Evelyn and her husband, Art, will be among the class reunion revelers. The two left their home in Arkansas on Saturday, April 29, and are slowly making their way north for the occasion, stopping to visit some of their friends along the way.

The two met at Concordia and have spent their working lives since in church-work careers – Evelyn as a Lutheran teacher and Art as a pastor.

The weekend is special for the Baisch couple because on Friday, May 12, they will be establishing two church-worker scholarship endowments. The endowments are in memory of Evelyn’s brother, Brian, whom she said wished he could have become a Lutheran pastor but never had the opportunity to do so, and Evelyn’s mother, a devout Christian who committed to sending her two sons to Lutheran grade schools and her two daughters to Concordia College.

“We felt that church-work is something that’s very near and dear to us,” Evelyn said. “We need our church-workers. We need to support them, and Concordia continues to be a wonderful place for training leaders for the Church all these years later.”

Editor’s Note: This is one in a series of stories featuring some of our unique or exemplary Class of 2017 May graduates. More stories will be posted on our Graduation Tab in the days leading up to commencement.