The eternal flame and its meaning 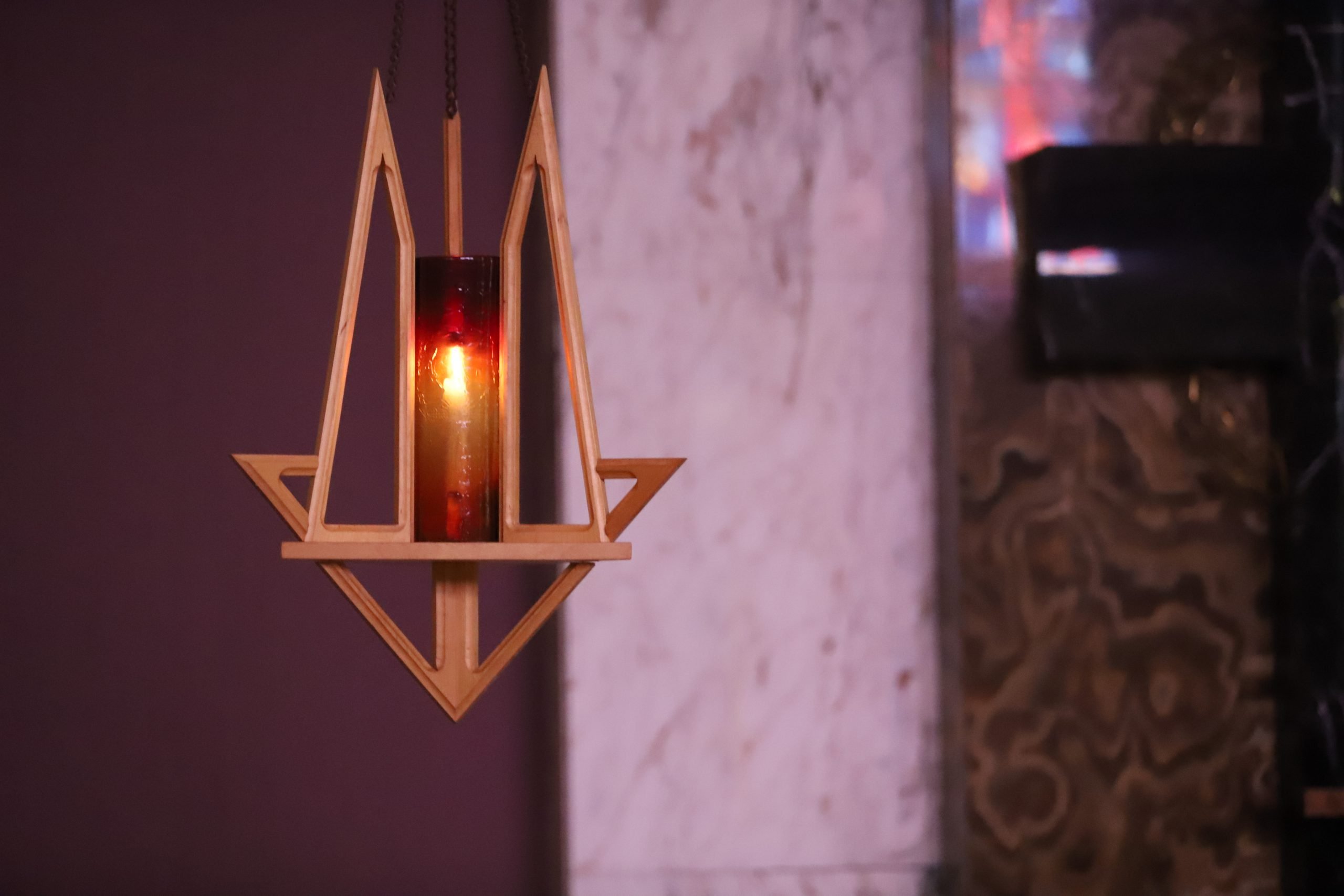 Editor's note: This is a statement written for the interpretation of the sanctuary lamp (or eternal flame) in the Rogate Chapel on Concordia University Wisconsin's campus.

The liturgical accouterments placed or hung in a sanctuary where His people meet with God are not to be viewed primarily as objects of art. They should inspire contemplation of Holy and Sacred thoughts and aid in devotion.

This sanctuary lamp is intended to help the worshiper to such blessings of worship, giving all glory to God.

See it, and very quickly think of these concepts of Holy Truth:

First of all, the burning candle itself. It is the Holy One of God who says, “I AM THE LIGHT OF THE WORLD.” It is not a vain boast of some pompous human being. It is as unto a light that shineth in a dark place that we give heed to this saying of Him who laid down His life and rose from the dead to earn salvation for stricken and destitute humanity. He, the Light, dispels the gross darkness where humans still tread upon the face of this earth. He, the Light, brightens human minds, hearts, and lives, and lights the way for them to make a safe journey through time and lead them to the everlasting splendor of the realms above.

For another thing, the entire suspended piece presents the characteristic of a directed moving object. With this in mind ponder Christ’s departure from heaven in the fullness of time and His humble, yet spectacular, invasion of the human scene in the flesh of all the humans who occupy this special sphere in the whole creation of our God. He penetrates the universe and comes as Man to be with man in order to reveal God and His divine and saving love. Without question, great is the mystery of godliness: God manifest in the flesh!

He is not a human invention of thought. He IS! He reveals Himself in the person of the Father of Creation, who providentially cares for and keeps what He has made. He reveals Himself in the Person of His Son whom He sends to reconcile the world unto Himself through an act of atonement, sealed in blood. He reveals Himself in the Person of His Spirit through whom He effects a new creation of those dead in trespasses and sin and restores them unto His own image of holiness. THE HOLY TRINITY! THE ONE ETERNAL GOD! Thus, the triangular features of the place propel the viewer to such contemplation of the Almighty, the Gracious, the Faithful God and Father, Divine Savior, and Holy Peace-Bringer and Comforter.

And where does this Holy Incarnation take place? On this earth, represented by the horizontal plane, also a triangular feature of the piece. It is God’s world. He made it, sustains it, and He came to it in His Christ. It is the place which He made to be inhabited by people whom He also made. He came to dwell among them that they say behold His glory.

Is this divine Presence and Blessing to be experienced by but a few? Is this illumination intended for restricted areas of this sin-darkened globe, for a limited number of sin-blackened hearts, for a select few of the multitudes heading toward a dismally and eternally dark future? The Risen Light of the world states the divine intention; and to the first ones unto whom He manifested himself and His whole purpose He said:

The points projecting outward from the piece help to urge thought for the worldwide Gospel mission, as Jesus, the Light has said, “As the Father hath sent me, even so send I you. Go.”

The divine objective of this One, truly borne of God, the only-One, is stated with His own determined words, “I will build my church. …” The Gospel, with its call, proclamation, promise, and power, succeeds. Not all the powers of Satan and hell will frustrate it. From the mass of humanity, dead in trespasses and sin, He will bring forth  new life in human beings through a second birth. The eternal God reaches into this human family by entering it. Heeding God’s will in His call to repentance in the Light of His incarnate Word, claiming His promise of gracious forgiveness, exercising His love in the example of His Son, His church reaches into God, growing into that holy temple in whom His Spirit dwells. The upward projections stimulate that joy in the confession: I believe in the Holy Christian Church, whose building is God’s own blessed work, not done through human reason or strength. He plants His Church and it grows up in Him.

This renewal, restoration, and return of rescued, redeemed believing people of God is effected only at a great price: The shedding of innocent blood. The red coloration of the candle shield reminds the contemplative viewer of that tremendous price of the redemption of the world—the willing self-sacrifice of God’s One and only-begotten Son, and the golden coloration of that glass column stirs the pondering of the glory of the Gospel.

What of the golden chain? Is it merely a practical feature holding the piece in suspension?

Let it bring thoughts of Jerusalem the Golden, the experience of the ultimate of Christian hope: a place in the splendor of those mansions which the Savior-Light-JESUS has gone on to prepare—the inheritance of heaven. That golden chain of sublime promise of the Triune God holds all those of this world who cling in faith to the Light of Light.

Ponder it all in quiet reflection and be further stirred to wonder, worship, and witness.