The uncommon pharmacist representing Concordia every step of the way

Editor's note: This is one in a series of stories highlighting Concordia's May 2020 graduates.

Cameron Cole is “super sciencey.” That’s his highly-technical explanation for how he wound up at Concordia University Wisconsin as an undergraduate student seven years ago, and why he stayed here all the way through pharmacy school. Cole is a member of CUW’s pharmacy class of 2020. His Doctorate in Pharmacy is one of the 849 degrees that will be conferred this weekend during a virtual ceremony.

Cole is a high-impact Concordian. Throughout his CUW career he was a drummer in Haven-2-Go and in the pep band, and has led various student organizations. His most notable achievement was serving as president of Concordia’s student chapter of the American College of Clinical Pharmacy (ACCP). This position allowed him to represent Concordia at ACCP’s 2018 Global Conference in Seattle, WA. 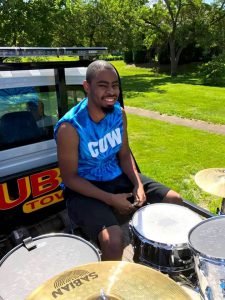 “My faith was strengthened for sure at Concordia,” says Cole who came to Concordia from Milwaukee Lutheran High School. “But it was more than just attending chapel, I was encouraged to become a servant leader which to me means putting others first.”

As an undergrad, Cole was introduced to the idea of pursuing pharmacy early through his biology and chemistry courses.

“I was intrigued by health care as a high school student, but never had any exposure until I came to Concordia,” says Cole. He credits his science professors for recognizing something in him and opening his eyes to a possible career in Pharmacy.

Cole was invited to participate in a pharmaceutical science research project as an undergrad and from that day on, he never looked back. He explains, “I got to study the exciting behavior of microorganisms and how their byproducts can hinder other microbes.” While he learned so much about organisms, lab etiquette, and research practices during his time in the lab, one of the most valuable things he learned was patience. “Waiting for cultures to grow isn’t as magnificent as it sounds,” he concedes with a smile.

Nevertheless, Cole was hooked. “I can’t see myself doing anything else. Pharmacy is the perfect fit for the type of person I am.”

Cole is a science guy who likes people and likes solving their problems. He enrolled in the pharmacy program before his senior year at Concordia. By the end of his first year, he earned an intern position at Aurora St. Luke’s Medical Center in Milwaukee, WI. His primary role was talking with patients and taking their medication histories. He has been there ever since, and has progressed to also educating patients and checking medication products.

“I enjoy talking to patients about their medications and making interventions,” says Cole. “Right out of the gate I was able to have patient engagement.”

Upon graduation, Cole will take his licensure exams and continue at Aurora St. Luke’s as a pharmacy resident. His responsibilities will expand to include staffing roles, clinical rotations, and becoming acquainted with the different specialties within his profession.

“Concordia prepared me well for this role,” says Cole. “I had such a strong support system all the way through my time here. I wouldn’t change a thing.”

Cole and his 2020 classmates will be honored at a virtual degree conferral ceremony on Saturday, May 16. They will be celebrated in person at the December commencement celebration. These changes are in response to the Coronavirus. To learn more about Concordia’s response, click here.