Psychology students help others in need ‘Get Stuffed’

Serving the community has long been a part of the psychology program at Concordia. See how some students put this idea to work for Thanksgiving this year.

Psychology is the study of the human mind and how it relates to behavior. So it makes sense that learning to help and relate to those in need is a psychological pursuit. And so it follows that students at CUW studying psychology—in particular those in the Psychology Club—would put those ideas into action by reaching out to help those in need in our community.

Each year, the Psych Club, along with students enrolled in Psychology 101, take part in various service projects. This year, the project took on a distinct Thanksgiving theme, as students raised money and collected boxes of stuffing for several local groups.

Students were able to raise money or collect boxes of stuffing for three different faith-based organizations. When all was said and done, the groups raised thousands of dollars and collected hundreds of boxes of stuffing.

“A lot of the students who raised money are not even psychology majors, which is awesome,” Voeltz said. “Psych 101 is a required course for a lot of people, so you always get a mix of  different majors with that.”

“The students just started going crazy with it,” Tuffey said. “I had them set a small goal, say, each student in a group is going to get one box of stuffing. So that’s five boxes of stuffing and five lives we’re going to make a difference in. All of a sudden, they come back and they’re jazzed up, they got 10 boxes of stuffing, and our congregation gave us $1,000—do you want us to buy $1,000 worth of stuffing?”

Another theme of this year’s efforts was the importance of addressing spiritual poverty as well as economic poverty. At the official collection and “thank you” ceremony, hosted by the Psych Club, pastors Andre Pirtle and Max Ramsey from Street Life Communities spoke on another important aspect of service.

“Both are pastors in the community, and have been connected with Concordia for a long time,” Voeltz said. “We invited them to come and talk about the relationship between economic poverty and spiritual poverty, and that’s a different way to look at poverty, compared to what society usually thinks of.”

Approximately 240 people gathered for the event, which alone helped raise energy levels for this project. 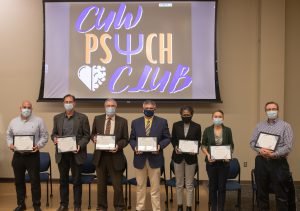 “I think students got so excited because it’s been a while since people have been able to gather,” Tuffey said. “We did service projects all through COVID, but to be able to gather together, starting off in prayer together, the providers actually coming in, the students handing them the money and the check and the stuffing, it all felt like it was close to normal again! Which is another thing to feel thankful about.”

“We used to host these really massive service projects, back when I was a freshman and sophomore, and then COVID hit,” Voeltz added. “This year, to see the dedication, to see well over 200 people show up, fully masked, all dedicated to coming together and offering donations and serving others—it was very inspiring.”

For more information about the Psychology Club of Concordia or about earning a degree in psychology, visit cuw.edu.

Why choose a Lutheran university?
previous story
Sharing the light of Christ in COVID isolation
next story