Not so long ago, the city of Aurora, Illinois had a reputation: it wasn’t a place you’d want to raise a family.

For decades beginning in the 1980s, the city’s violent crime rate annually eclipsed national averages, the result of gang-driven crime. In the mid-1990s, in particular, Aurora’s murder rate averaged three times the national rate, reaching a peak 26 murders in 1996.

That was the year Dr. Arletta Frazier began an internship with the Aurora Police Department. As a soon-to-be graduate of Aurora University’s Master of Social Work program, Frazier took on the tall order of helping to build relationships between the police force and community members and bring healing to a city in crisis.

Frazier, who now serves as a faculty member for Concordia University Wisconsin’s Master of Social Work program, played a part in piloting community programs that helped begin to turn the tide for the city. Over the next several years, community outreach programs, combined with local police’s and federal agencies’ crackdown on gangs, served to curb the high violent crime rate in Aurora. Today, the number of violent crimes in Aurora has significantly decreased, with its murder rate down to six in 2017 and four in 2018.

“It came down to the community taking ownership and taking back control,” Frazier said. “We started with the emotions: ‘Let’s talk about how those deaths affected you.’ And then we transitioned into ownership: ‘What do you want to see? What do we do from here? How are we going to use the police officers in this plan?’ And we started to turn that neighborhood around.”

Twenty-five years later, Frazier is at the forefront of forging a new partnership between police and social workers for the betterment of a community.

Concordia and the Racine Police Department are currently finalizing details of a new internship program that would see five CUW Master of Social Work students gain on-the-job experience with the police department. The student-interns would assist with police dispatch and community engagement. The program could start as early as fall 2021.

“We’re living at a time when distrust of police is at an all-time high,” Frazier said. “But police aren’t bad in and of themselves. It’s figuring out how to utilize the police and helping build trust within communities. And trust begins with building relationships.”

The internship program has been more than a year in the making. Following the public outcry and outpouring of protests over the killings of George Floyd, Breonna Taylor, and Ahmaud Arbery last year, Racine city officials formed a community task force to assess the city’s policing procedures and evaluate the need for police reform.

Payne and Frazier Consultants, a private firm owned by Frazier and Kimberly Payne, was called upon to oversee and assess the task force’s efforts. Frazier and Payne also facilitated three community conversations in July to gather feedback from Racine residents. Hundreds attended the virtual sessions.

Frazier and Payne submitted a summation report of their efforts to city officials in December. After that, conversations about a partnership between Concordia’s social work program and the police force began, said Frazier.

The case for police social workers

The notion of embedding social workers into police operations is not new, but, nationwide, few departments actually have social workers on the payroll. The idea has gained new traction in recent months due to the national discourse, however.

Frazier says the goal for social workers who work with police is to “assist with the crucial matters of dealing with issues of humanity.”

Mental health management is also a key area of concern, says Frazier. One Kentucky town that added a social worker to its roster four years ago, cited the volume of mental health-related calls the department received as a primary motivation for the hire. In Alexandria, Kentucky, a town of 10,000, two-thirds of the calls police responded to were not criminal—instead, they were mental health crises and arguments resulting from long-brewing interpersonal conflicts, The Guardian cites.

“The police receive so many calls about non-criminal matters,” Frazier said. “The goal is to better allot responsibilities and to get residents connected to resources that they need. That’s part of what the social workers does – connect people with long-established community resources.”

Connecting people with the help they need and caring for the whole person—mind, body, and spirit—is something that Frazier clearly has a heart for. In November 2018, Frazier, along with Myron Tucker, opened the Peace of Mind Shelter, a temporary shelter for Racine County foster children awaiting placement in a more permanent home.

“Above all else, the goal is for people to be safe, have stable homes, and to be successful, contributing members of society,” Frazier said. “I’m so excited for this partnership with the Racine Police Department to officially begin and for us to begin to make a change for the better in my home city.”

Frazier recently was featured in The Journal Times for her anticipated partnership with the Racine Police Department. Click here or on the image below to read the story. 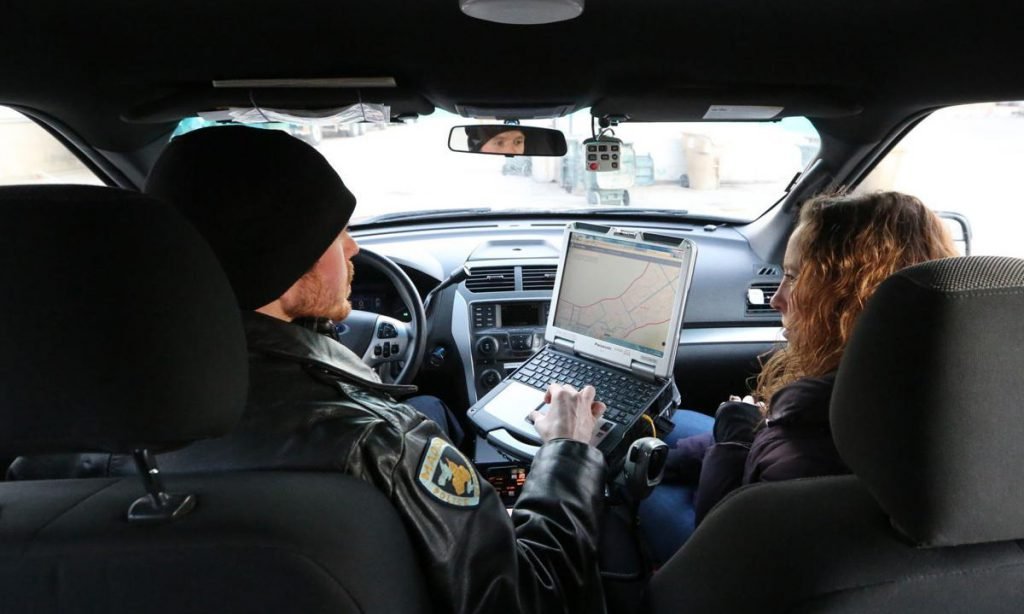 Ferry Fest, April 26-29: A celebration of our beloved outgoing president
previous story
Nursing is in their DNA: Grace and Hope
next story