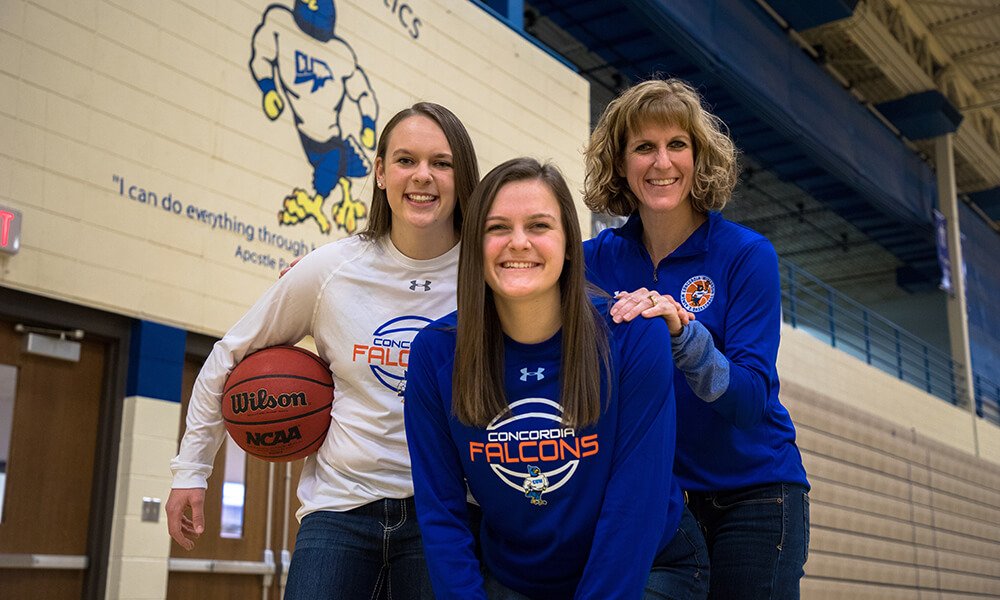 Emily Hafemann didn’t decide on a college until a week before her high school graduation.

It wasn’t that the Falcons women’s basketball player—now a sophomore studying nursing at CUW—was lackadaisical about the decision. Rather, she spent months diligently poring over admissions materials and touring college campuses to help her make up her mind.

Related: Stepping up to the plate

All along, Emily says she felt pulled to Concordia but was hesitant to commit because both her mother, Sue (Duchow) Hafemann (’92, ’08), and sister, Liz Hafemann (’17), played basketball for Concordia and graduated with their nursing degrees before her.

“I was determined at first to not just automatically follow in my mom’s and sister’s footsteps,” Emily says. “But with every college I toured I always just compared it back to Concordia. Nothing else measured up.”

As a result, the three Hafemann women have more than ever in common. If they’re not talking game strategy, they’re trading tips on hospital bedside manner—and always playing each others’ biggest fans.

Emily and Liz say they’re proud to be part of the legacy started by their mother. Sue, a 2005 William C. Ackmann Athletic Hall of Fame inductee, played basketball and volleyball for Concordia from 1988–92. Within that time, she earned scholar athlete status all four years, was named NAIA Academic All-American in 1991 and 1992, and was named CUW’s Female Senior Athlete of the Year in 1992. She helped the ’92 women’s basketball team earn their way to nationals, and she’s one of only 16 female athletes to have earned a spot among Concordia’s prestigious 1,000 Point Club.

Sue, whose father served as registrar at Concordia for 40 years, practically grew up in Concordia’s gym. Her trips to the field house for sporting events were so frequent that it seemed only natural to her to then enroll.

“I think the girls saw the love and the pride of the place in me, but with both of my daughters I was careful not to interfere with their college search process because I wanted the choice to be theirs,” says Sue. “I am glad that they chose Concordia, though. It’s special that we share this connection with our careers, basketball, and Concordia. I think what attracted me to Concordia is what ultimately attracted them. Knowing the value of a Christian education, and then having quality programs and people around you—that’s the stuff that will never go away.”

For Liz, the decision to enroll at Concordia was also an easy one. She didn’t even apply to any other universities. Today she works on the cardiothoracic step-down ICU floor at Aurora St. Luke’s Medical Center—another shared experience among the three. Sue, who’s now a family nurse practitioner at Lakeshore Medical Clinic in Greenfield and an adjunct instructor at CUW, started her career working on the same floor, and Emily started an internship there last semester.

Both Emily and Liz credit their mom with teaching them to always work harder. Liz says she and her mom—and eventually her sister—would often go to the Highland House after their games to rehash the competition and to share in celebrations, as well as frustrations.

“My mom has always been super supportive, and it was just little things she’d say over and over to me that helped me realize how important it was to have a good work ethic,” Liz says. “Even if you don’t have all the talent in the world, if you work hard you can prove more than someone who does have a lot of talent.”

Emily says she feels privileged to have seen that strong work ethic modeled by her older sister, as well. During their one year of overlap at CUW, Emily watched her sister balance the rigor of her senior-year academic schedule with her basketball commitment, and it gave Emily confidence that she’d also be able to manage it one day.

“I finally realized that Concordia is the place I’m supposed to be,” Emily says. “Even though my mom and sister went here, it’s still 100 percent the right place for me, and I couldn’t imagine being anywhere else.”