In her 22 years at Concordia University Wisconsin, Dean Linda Samuel, PhD, OTR, has had no shortage of proud graduation day moments.

This year, however, was particularly special for the head of Concordia’s School of Health Professions.

On May 13, Samuel watched her 25-year-old son, Joe, earn his Certificate of Applied Learning and become a member of the second graduating class of Bethesda College. He was joined by his two classmates, Ryan McClane, from Pittsburgh, and Bobby Kuske, of Whitefish Bay, as well as Concordia University Wisconsin’s 1,107 undergraduate and graduate candidates.

“We’re really proud of him,” Samuel said of her son, who has been diagnosed as learning disabled and who struggles with speech and language comprehension.

Through a partnership with Bethesda Lutheran Communities, Concordia started in 2014 Bethesda College, a unique, two-year program designed for students with developmental disabilities. 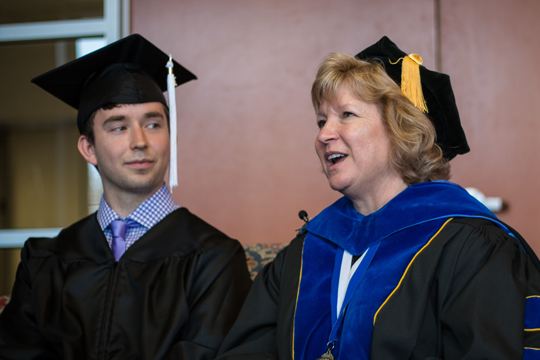 Bethesda College leverages the strengths of both organizations – the best practices of a nationwide service provider for people with developmental disabilities and the resources and atmosphere of an accredited university. Students in the Bethesda program live in dorms, attend classes with Concordia University students and take advantage of the social offerings available on campus.

Samuel was supportive of the College from its inception. She and her husband, Doug, had looked at a school in Minnesota for Joe, but found it was cost prohibitive, so when Concordia’s discussions with Bethesda Lutheran Communities began, Samuel said she was quick to offer support from the School of Health Professions.

Because of that support, Bethesda students now receive mentorship from students in Concordia’s physical therapy, physician assistant and occupational therapy programs. The PT and PA students have focused on wellness issues and exercise, while the OT students have offered their skills on a number of topics ranging from basic cooking to communication.

It’s a winning combination for students in the health professions programs, as well, says Samuel. The Bethesda connection helps further a goal Samuel has for all Concordia students in her charge: “I want students to graduate from Concordia not only proficient in the field, but with a servant mindset, eager to go out of their way to treat people in a Christian manner.”

And she expects nothing less from her children, all of whom have attended Concordia. Her eldest two sons already earned their degrees from Concordia – Steve (’10) received his undergraduate degree in biology and is now a chiropractor, and Bryan (’12 and ’13) received his undergraduate degree in rehabilitation science and master’s degree in occupational therapy. Linda’s youngest son, inspired by his brother, will graduate in December 2017 with his degree in special education.

Now a Bethesda graduate, Joe will continue on with his full-time job in Concordia’s maintenance department.

“Everything for Joe is always a little harder than anybody else, but he just keeps going. He’s succeeding.” Dr. Linda Samuel, Dean of the School of Health Professions

During the semester, Joe learned to balance his coursework with his job responsibilities. Every weekday he’d begin his day with Bethesda at 8:30 a.m. and at 2 p.m., he’d switch gears and head to work, putting in an eight-hour shift before bed.

“His biggest strength is his work ethic,” said Samuel. “Before he started classes, he used to come two hours early just to make sure he wasn’t late for work.”

Joe’s Bethesda experience has given him a great deal, said Samuel: a chance to hone his time management skills, an introduction to his place of belonging (i.e. Special Olympics), and a community of people who know and appreciate him.
But the greatest gift Bethesda College has given her son is confidence, said Samuel.