"Should we get you an instrument?": How one simple question started me down a path to joining the CUW pep band—40 years after I last touched a trombone.

I’m a compulsive whistler. Sometimes the notes come out without me even realizing it. When someone notices (or complains), I generally shrug apologetically and say, “I got the music in me!”

But when a CUW Pep Band flute player at the parent send-off event at the baseball stadium last August (I was on the field taking pictures in the line of duty) caught me whistling away between songs, I had a different response.

“Should we get you an instrument?” she asked me with a smile. I laughed and thought to myself—or did I say it out loud?—“Well, you know, I used to be a pretty good trombone player ….”

That planted the seed. But I’m not a very impulsive person, so when I get these crazy ideas now and then, I have to mull them over for a while. Often, I quickly think, “No, that’s not a good idea,” and then shove the scary thought away into the dustbin of personal history. But sometimes, thoughts of “Well, why not?” push aside the doubts.

It had been almost exactly 40 years since I last played a note in my high school band (go ahead, do the math, I’m 58). Some years later, when I finally moved out of my mom’s house for the last time, she pulled my dusty trombone out of a closet and said, “Here, do something with this.” So I took it to the music store and traded it in for a guitar (a decision I don’t regret). Step one, then, would be finding an instrument. I couldn’t justify spending hundreds or potentially even thousands of dollars on a replacement, so I started looking and asking around to for a decent used trombone I could beg, borrow, or buy real cheap.

Meanwhile, I also knew I would need a place to play. Unlike a guitar, a trombone is not an instrument that’s good for sitting around on the couch and playing for fun. So I got in touch with Johanna Anderson, associate director of instrumental music, and asked if there were any CUW groups I could join. “We’d love to have you play in the Pep Band,” she replied.

Just what I was hoping to hear!

Eventually, I found a well-loved Yamaha student trombone on Facebook that I was able to nab for just $100. Turns out it had been in the sellers’ closet for a while and used to belong to their now-adult daughter. I imagined at some point they might have said to her, “Here, do something with this.”

After I picked up my “new” horn, I took it home, unpacked it, waited for my wife to leave the house, then pursed my lips and blew. But gurgles came out instead of notes. What my band director used to call my “chops” (the technical term is “embouchure”) had become floppy and ineffective. I would be a longer road back than I imagined.

How to play, however, came back pretty quickly. I remembered which notes corresponded to which slide positions, and after a few practice sessions, something resembling music began to find its way out of the shiny brass bell. By Christmas break I was feeling fairly confident and talked to Johanna about diving in with the Pep Band. Target date: February 2, at the first home basketball game of the new semester.

Here’s the tricky part: The Pep Band doesn’t practice after semester break. They rehearse during the fall semester and then ride that momentum through the spring. I would be jumping in with no rehearsals! A trial by fire! And there are like 50 songs on the playlist! I found it very intimidating!!!!

Johanna helped by telling me which pieces they play the most, about 30 songs. I ended up learning 25 or so pretty well, while a handful had high notes I couldn’t reach or rhythms I couldn’t quite figure out. She said that’s fine, Pep Band is very casual and fun—just play what you can and fake it when you can’t!

Still, I got fairly nervous as the big day approached, fretting about stupid, little things. Would my chops betray me? How do bands tune up these days? Would the other kids like me? Will I know where to put my coat?

Johanna—“Mrs. A.,” as the students call her—came through again, telling me she asked another trombone player to take me under his wing. So a big shout-out to music major Alex Lauersdorf (’23), who did an excellent job at that. In fact, he came to my office the day of the game to introduce himself and see if I had any questions. Above and beyond! He’ll make a fine band director one day.

When it came time to toot my horn in public, I was pleasantly surprised with how well it went. I could do it! I could play and keep up! Well, I could mostly keep up. It turns out they play the “CUW Fight Song” about twice as fast as I had practiced it. It was soooo fast! I don’t know how anyone could play all the notes on the page at that pace—which explains why Alex said, “Well, I just ad lib a little bit on that one.”

The kids—sorry, students—in the band seemed largely indifferent to my presence, but in a good way. The vibe I felt was something like, “Hey, there’s an old guy I don’t recognize playing trombone today. Cool.” When the young man on the drum kit (who eerily resembled a 22-year-old me) asked me with a puzzled look, “What year are you?” I laughed and said, “Class of 1981!” (Though I wish I’d said, “Super-senior.”)

My only frustration is that we didn’t get to play more. They don’t call enough timeouts in D3 basketball!

Did someone say ‘encore’?

With several basketball game performances now under my belt, I can say all that work was worth it. It turns out I still got the music in me. It’s fun to be part of a band again, and the Pep Band is a great group to be a part of. (Want to join? Talk to Mrs. A.!) And the Spring Pep Band concert last night was a fitting finale. I guess 58 is not too late to take on a new challenge!

I feel very blessed to be a part of it all, and grateful to CUW for providing me with this experience. And the Pep Band is not the only way faculty, staff, and others can take part in CUW music programs. If you’re a vocalist, faculty and staff are welcome to sing alongside students in the Chapel Choir. Faculty, staff, alumni, and community members are all welcome to be a part of the Civic Chorale. (Want to join? Talk to Dr. Alexa Doebele!)

As a bonus, one of the things I’ve been doing in my one year-plus here is to look for new ways to engage and feel like a part of things. This definitely accomplished that! Never has my annoying whistling paid off in such a fun and exciting way. And thanks to the flute player who recognized my enormous talent! 😉

So, “Should we get you an instrument?” Heck, YEAH! If you’re thinking about it, go for it! And maybe next year I won’t be the only “over-the-hill” instrumentalist joining the fun with the Pep Band! 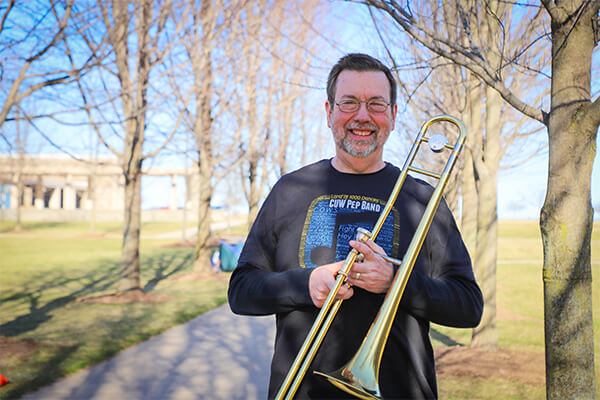 For more information about music programs at Concordia University Wisconsin, visit the Department of Music at cuw.edu.

We believe, teach, and confess service to Christ in the Church and world
previous story
What degree do you need to become a pharmacist?
next story