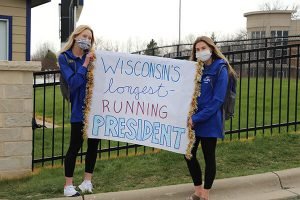 Additionally, he is, literally, the longest-running president in the state. Since Dec. 20, 2012, he’s run at least three miles every single day, outside of an eight-day stretch in 2019 when his running streak was put on pause by doctor’s orders due to complications from the flu.

To honor his staying power, the CUW community put together a “Final Run” effort in recognition of his service to the university. Yesterday, CUW surprised President Ferry with cheering stations along his routine 3-mile route around campus.

TMJ4’s Stephanie Haines turned out to capture the event. Click on the button below to view the segment which aired last night.

See CUW in the News

Pharmacy in Focus: Apiew Ojulu Presents on Refugee Healthcare
previous story
Want to work in tech? Here's our 10 Tips for making your move into tech
next story