Thanks to an endowment started by several Concordia University pre-seminary graduates, today’s pastors-in-training at CUW are able to receive several of their essential language texts for free. 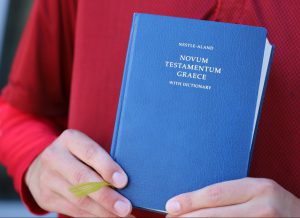 Incoming pre-seminary students will now be equipped with the following four basic language texts required to complete their undergraduate track:

The books are supported by the Rev. Dr. Victor A. Bartling Memorial Endowment. Twenty years ago, Concordia high school graduates from the Class of 1950 began the endowment in honor of their beloved professor, Dr. Bartling, and in celebration of their 50th reunion.

Class President Rev. Harvey Lange took the initiative to raise funds for the endowment. While many of the donors have now passed on, Lange, age 90, is among those still alive to witness some of the endowment’s most recent beneficiaries. At the time, a $50,000 goal was surpassed. Since 2002, earnings from the endowment have supported theological education at CUW in various ways: theological resources for the library, theological lectures on campus, the Concordia Theological Journal.

Bartling, who is also an alumnus, began teaching the classics at Concordia in 1927. He later went on to teach New Testament Language and Interpretation at Concordia Seminary in St. Louis, and, in 1952, began his service as Associate Editor of The Lutheran Witness and Associate Editor of the Concordia Theological Monthly. His early years as a graduate-level professor coincided with the Class of 1950’s entry into seminary, much to their delight, recalls Lange.

“We used to call Dr. Bartling ‘Uncle Vic,’” Lange says. “He was just a very kind and compassionate person to all of his students.”

Through the help of generous donors, Concordia has committed to supporting pre-seminary students in various ways. An effort is currently underway to add $1 million to The Concordia Bible Institute Saleska Scholarship Endowment, which supports students who are entering the pre-seminary program at CUW.

Now, for a limited time, gifts of $2,500 or greater will be matched dollar for dollar, if donated to establish or add to named or general endowments at Concordia (including the Saleska Scholarship Endowment). Please contact Jeff Klocko, Director of Donor Relations, for details about this opportunity to support future Church leaders. He may be reached at Jeff.Klocko@cuw.edu or 262-243-2170.

Which Concordia professor comes to mind when you think of the instructors who most impacted your life? A wonderful way to pay tribute to an admired professor is to start an endowment. Contact the Office of Advancement, Advancement@cuw.edu  or 262-243-4333 for details on how to get one started.