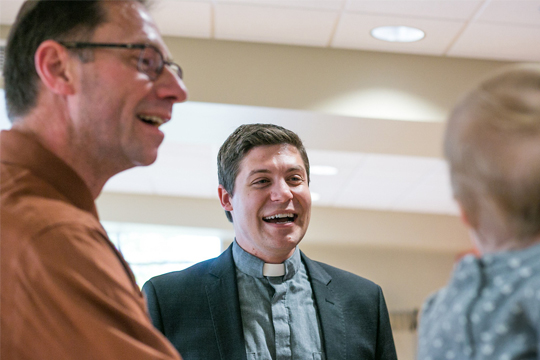 Bender, who is a 2010 graduate of CUW, officially began his role on Oct. 30, but was installed on Nov. 6 during Daily Chapel. His father, Rev. Harold Bender, who is pastor at St. Paul’s Lutheran Church and School in West Allis, Wisconsin, served as preacher.

Following Chapel, the Concordia community gathered to celebrate Bender’s installation and welcome him and his family with a reception.

“This position is something that I just felt God kept opening the door to,” Bender said. “My time at Concordia as a student really fueled my passion for college ministry because of what I received as a student. I’m excited to now get to walk alongside Concordia students in the process of their faith growth.”

In his new role, Bender is charged with overseeing the efforts of Concordia’s praise band, The Haven. He’ll also play an integral role in B.U.I.L.D., a ministry for men at Concordia, and he’ll participate in the planning and organizing of the mission trip opportunities Concordia annually makes available to its students.

Concordia created the associate campus pastor position to fulfill the vacancy left by Deaconess Kim Bueltmann, who announced last summer that she had accepted a call to become a career missionary through the LCMS Office of International Mission. She had served as Concordia’s director of campus ministry for seven years prior to that.

During his time as a university student, Bender was heavily involved in a variety of campus ministry efforts and other extracurricular activities, including worship committee, The Haven, and pep band. He also served as spiritual growth coordinator, a chapel greeter, and as an RA for three years.

After graduating from Concordia, Bender attended Concordia Seminary, St. Louis, and spent his vicarage internship year at Immanuel Lutheran Church in Macomb, Michigan. Since 2014, he has served as associate pastor of youth and families at St. Paul’s Lutheran Church in Decatur, Illinois.

Bender is married to Michelle (Russell) Bender, who graduated from Concordia’s School of Nursing in 2013. The two have an 18-month-old daughter, Elinor.

Bender has four siblings, two of which have also attended CUW. His youngest brother, Joseph, is currently a freshman.