Caps off to CUW’s own Dean Rennicke, vice president of advancement, who will be honored by the Lakeshore Chinooks on Sunday, August 7, with his very own bobblehead figure!

What makes Dean worthy of such distinction? We’re so glad you asked. Here are just a few highlights of an amazing career that has earned him a place in the proud pantheon of bobblehead heroes!

He comes from a renowned baseball family.

He was a star athlete in high school. 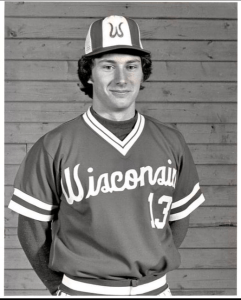 One of the stars of that 1978 championship team was Don’s son Dean. A right-handed pitcher, Dean had a 16-0 record his senior year, including two no-hit games. Inducted into the Homestead H.S. Athletic Hall of Fame in 2012 (Don and Randy are also members), Dean was also on the basketball and track teams.

He was drafted by the Los Angeles Dodgers.

After playing three years for the Wisconsin Badgers baseball team, Dean was drafted by the Los Angeles Dodgers. He played five seasons in the Dodgers’ minor-league system, including four at the AAA level, but multiple arm surgeries meant he never got that long-sought call-up to the majors. A

He worked for Milwaukee Brewers and was the first GM for the Lakeshore Chinooks.

Following his pro baseball career, Dean finished his degree at UW-Milwaukee then spent 15 years working for the Milwaukee Brewers in various roles. He later worked for the Journal Broadcast Group and then Kapco, Inc., which made him a natural fit to become the first general manager of the Lakeshore Chinooks in 2009 (the team’s first season was in 2012). He was named the Northwoods League Executive of the Year in 2014, joined Concordia as vice president of the Concordia University Wisconsin Foundation in 2017, and was named to the inaugural class of the Chinooks Hall of Fame in 2022.

People who know Dean today know him as a great husband, father, friend, colleague, and man of faith. He and his wife Margaret love vacationing in Door County but dream of traveling to Israel one day to see the Biblical sites. His favorite foods are steak and Margaret’s homemade chicken salad. They are members of First Immanuel Lutheran Church in Cedarburg, where Dean says he especially enjoys taking part in communion services. They have three children: Ben, Elizabeth, and Abby. He loves spending time with family, plays golf when he can find time, and is a fan of ALL our local sports teams.

How to get yours:

Want to get your hands on one of those coveted Dean Rennicke bobblehead figures? Just come to Kapco Park on Sunday, August 7. Game time is 5:05 p.m.—but get there early: only the first 1,000 fans will score a free bobblehead! Get tickets ahead of time HERE.

$1,000 scholarship available to prospective undergrads who schedule CUW visit before Nov. 15
previous story
What is the difference between a DCM and a DCE?
next story