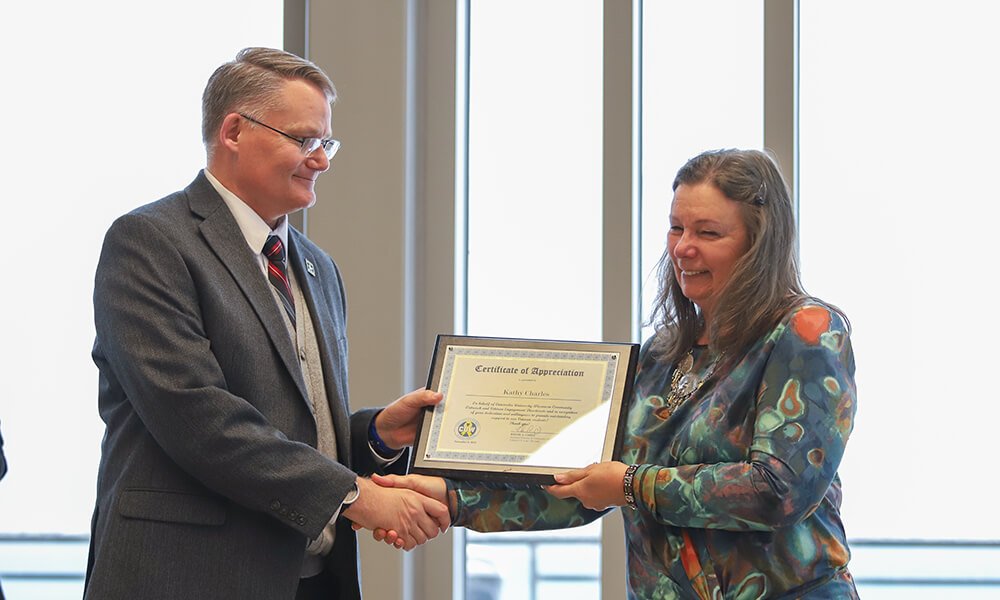 Keith Casey honors Kathy Charles with a certificate of appreciation for her work with the Veterans Resource Center.

Matt Kempainen’s days on the battlefield may be over, but his fighting spirit for his fellow service members shows no signs of stopping.

Kempainen, a retired Army infantryman who has served two tours in Iraq and one in Afghanistan, now serves as Senior Vice Commander for the Wisconsin Disabled American Veterans (DAV) organization. He’s on track to graduate next month from Concordia’s Green Bay Center with his bachelor’s in Criminal Justice.

In his role with the DAV, Kempainen advocates for veterans at the state and national levels. In February, for example, he’ll travel to Washington, D.C. to speak before Congress and lobby for legislation and benefit rights for military.

Kempainen’s advocacy efforts, while vital, are only one half of the hurdle, however. Another important, but sometimes elusive, piece is making sure veterans know about the benefits that exist and how to access them.

“It’s hard for veterans to navigate the system, because the system keeps on changing,” Kempainen said. “The main way we learn about things is through these military organizations that exist throughout the state.”

A gathering of the whole

The Wisconsin Department of Veterans Affairs lists 10 Veteran Service Organizations on its website, but there are dozens more non-profits and non-DVA-recognized groups dedicated to veterans’ welfare in existence in Wisconsin. Concordia’s Green Bay Center is learning just how many more thanks to the quarterly Veterans Resource Group it hosts.

Started in 2015, Concordia’s Veterans Resource Group invites any and all military-friendly entities to gather, network, and share the latest efforts of their organizations in an attempt to reduce redundancies or spot gaps among services.

The first meeting took place in fall 2015 and welcomed a little over 15 attendees. Today, more than 70 people regularly attend, and the invite list has grown to 275.

During the meetings, the groups in attendance each have opportunity to introduce themselves, share what they do, and inform the whole of upcoming events or issues they’re facing.

The networking that takes place is a key part of its success.

“As we meet, we’re figuring out what each other does and how we all fit in together so that we can become the liaison for the veterans who come our way,” said Kempainen, who has been attending the Veterans Resource Group since 2017. “Those who have served in the military, they need to talk to someone who has been there, done it. Then you get that trust that this is not just some corporate or government agency that’s helping you.”

The success of the group spawned a similar effort, called Veterans Round Table, at Concordia’s Appleton Center. Concordia’s new assistant director of community outreach and veteran engagement, Keith Casey, said his goal is to expand the model to each of Concordia’s nine center locations throughout the state.

While the Resource Group has grown to accommodate dozens of new participants over the years, one person who has been with it since its start is Kathy Charles, regional admission counselor for Concordia’s Green Bay and Appleton Centers.

Charles is largely responsible for keeping the group structured – she sends out meeting invites, keeps a running list of every person who has ever attended, and takes down detailed notes during each meeting that are then sent to the whole afterwards.

For her efforts, Concordia’s Veteran Services Department honored Charles with a Certificate of Appreciation last week as part of a ‘thank you’ luncheon that brought dozens of SVOs to CUW’s campus.

“All of us at Concordia seek to provide those we serve with a five-star experience and one of the ways we do that is by extending Christian hospitality to those we encounter,” Charles said. “It’s not difficult to do this with the Veterans Resource Group. You get to see and hear about the tangible impact that those in the group are having and it’s hard not to be excited about playing a small part in that.”

Kempainen said the Veterans Resource Group has had a direct impact on his ability to help connect veterans with more of the resources they need. He’s excited to see the model continue to expand to more of Concordia’s center locations throughout the state.

“Green Bay is a big hit. We have people coming from throughout the state to this resource center,” Kempainen said. “It’s a strong showing that the state of Wisconsin backs its veterans, and Concordia is doing that too.”

Concordia is a Military Friendly school. It accepts up to 63 transfer credits for military service and training, more than any other university in the state. Learn more about Concordia Veteran Services here.

In April 2020 Concordia’s Green Bay and Appleton Centers will host a “Coalition for Whole Health” for veterans, military members, and military families. The Centers are partnering with NWTC, FVTC, UWGB and several other organizations to make the event a success.

The event will focus on the generational effects of Agent Orange on the children and grandchildren of those who served in Vietnam and the detrimental effects of the Burn Pits to which Iraq and Afghanistan veterans were exposed. VA representatives will be on hand to assist with claims.