The CUW International Center hosted a celebration for the group on Tuesday, giving the new students a chance to meet with University President Rev. Patrick T. Ferry, Ph.D., and some of Concordia’s faculty, staff and students.

The crew joins the approximately 300 returning international students at CUW, earning Concordia a spot among the top five universities in the state for international enrollment. 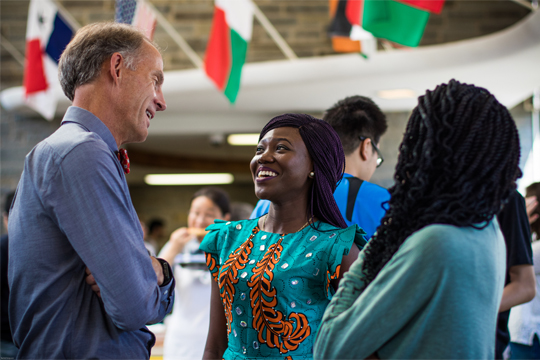 While 100 students is not a record high for CUW, the number reflects an enrollment trend that has held consistent for the past four years. Executive Director of International Education Dr. David Birner says the number is also to be celebrated in light of the current political climate.

“We’re celebrating a truly international community here at Concordia,” Birner says. “As we continue to prepare students for callings in locations throughout the world, it becomes imperative that we begin to expose students to that global community on campus and also extend that welcome internationally.”

The students hail from more than a dozen countries, with the majority calling China, Nigeria, India and Saudi Arabia home. Countries that are also represented in the fall intake include Vietnam, South Korea, Haiti, Jordan, and Brazil.

As Ferry addressed the group that gathered on Tuesday, he spoke of the vital role the international students play at Concordia.

“You are an important part of the Concordia community, as we deal with international issues and just as an enrichment to others’ lives,” Ferry said. “In a way, you are ambassadors of the whole world for Concordia students, and I encourage you to expand your experience now by connecting with as many people in the university as you can.”