One last dip in the pool on Concordia’s former campus

Concordia's inaugural athletic director, William C. Ackmann, brought a swimming pool to CUW in 1955. About seven decades later, we bid farewell to a "gem" of the old campus.

William C. Ackmann, Concordia’s inaugural athletic director and the namesake of its hall of fame, set the standard for what the caliber, character, and conduct of a Concordia athlete should be.

Ackmann served as athletic director from 1928 to 1955 and then  dean of students until 1977. He came to Concordia on a gentleman’s agreement and without a stipulated salary—just room and board, and a job. Ackmann’s trust in Concordia’s mission and his passion for leveraging athletics as a means to cultivate the whole person was immediately evident. A 1948 yearbook articulated Ackmann’s philosophy well:

“According to (William Ackmann), his job is to build men not only physically, but primarily mentally. All recognize in him the spirit he strives to instill in others—a dedication and zeal for physical fitness, coupled with a strong desire to build Christian sportsmen and future servants of God.”

Ackmann saw the value in offering a range of athletic opportunities for students. It took him only a few weeks on campus to set up a long-range plan to develop and improve programs and facilities at Concordia for the benefit of all students. He’s well-known, for example, for championing the construction of a state-of-the-art swimming pool on the Milwaukee campus in the mid 1950s because he believed so firmly in the value it would bring to all varieties of Concordians.

A dive into the pool before it was razed

Concordia relocated to its current spot in Mequon in 1983, so it’s been some time since any Concordian made a splash in the pool. However, the structure has remained in tact—until recently.

Tanzilo and Imig featured Concordia’s former pool on this week’s “Urban Spelunking” episode. Click here or on the image below to access their story. 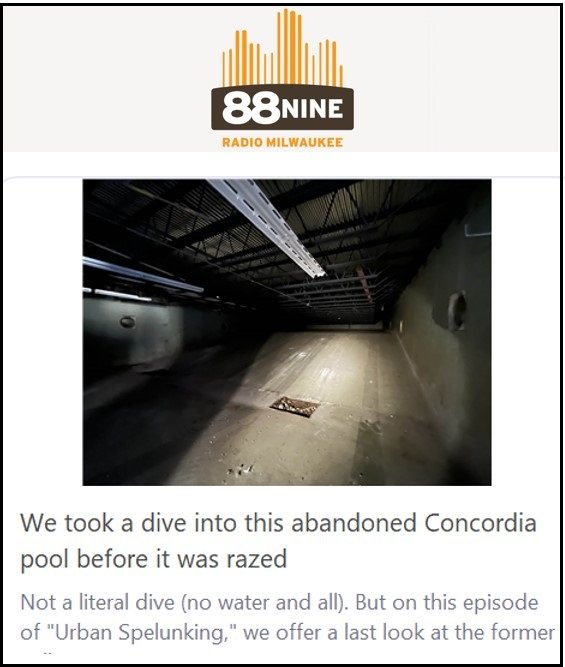