Called alongside to be a pastor

If you were to ask Isaiah Mudge to sum up the qualities of an effective pastor, he would readily describe his father: someone who cares deeply about others and, at the same time, is unwilling to budge from the truth of God’s Word.

Incidentally, Rev. Dr. Ron Mudge would say the same of his son. Even as a child, Isaiah’s pastoral heart was evident. Dr. Mudge once overheard a 6-year-old Isaiah unabashedly proclaim God’s love to a group of teenagers. Uncomfortable with the conversation, one of the teens tried to abandon the subject: “Let’s just drop it.”

To which Isaiah, filled with the assurance of Christ crucified, replied: “Okay, but God does love you.” 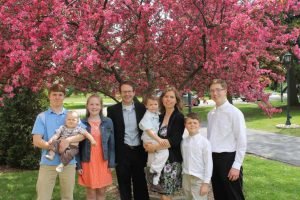 “I thought to myself, he’s a better evangelist than I am!” Dr. Mudge said with a smile of recollection. “He cares so much about human beings. He wants good for them, and when he sees them making a decision that would reject Christ it breaks his heart.”

Even though Dr. Mudge and his wife never forced the matter, they found opportunities early on to encourage Isaiah to consider ministry. They also took advantage of opportunities to model the joys of being a Christian, as well as the responsibilities that come with it.

“I can’t tell you how many times I’ve tried to rant to my dad, and he’ll stop me and urge me to consider, ‘Are you sinning right now?’” Isaiah said. “Because anger is okay, but if you’re disparaging someone you’re damaging both them and yourself.”

In high school, Isaiah experienced the mission field of public school. He hadn’t yet settled on becoming a pastor when he entered ninth grade, but the public-school setting presented no shortage of opportunities for him to test the waters of his future vocation. Many of Isaiah’s classmates would often grill him with questions about his faith. Isaiah would boldly rise to each occasion, calling on his parents afterward for reflection and growth opportunities.

“With all of our kids, we would talk with them frequently about the things that were challenging their faith,” Dr. Mudge said. “We wanted our kids to be salt and light. We were confident that they were strong in their faith, but we wanted to equip them to be able to respond to those who weren’t.”

It was painful for Isaiah to witness the hurt that his friends endured, often due to their disbelief, and he graduated from high school emotionally spent.

“By the time I decided to become a pastor, I was pretty exhausted from having those challenging conversations,” Isaiah said. “I think there was a lot of sadness that was present for me. Concordia has helped to heal that and to teach me how to be a more effective witness.”

Professors at Concordia have played a pivotal role in Isaiah’s growth, as well as the growth of countless others. For the past 15 years, Dr. Mudge has played a role in the effort as well, though he announced in April that he will end his tenure at CUW to serve as provost at Concordia Seminary, St. Louis. As head of CUW’s pre-seminary program, Dr. Mudge put his winning combination of love and conviction into action to encourage young men all over the world to consider CUW as their home base, helping the Mequon campus earn a distinction as the preferred choice for pre-seminary studies among the Concordia University System schools.

“You can ask any pre-seminary student,” Isaiah said. “My dad is the person who cares about you but won’t budge. The human inclination is to hurt the people around us. The godly inclination is to guide them towards love.”

The CUW and CUAA campuses offer a variety of substantial scholarships for those wishing to become a pastor. New for the 2022–23 academic year, up to three full- tuition scholarships—one for CUAA and two for CUW—will be awarded to pre-seminary students who meet the qualifications, including:

Editor’s note: This story first appeared in the spring 2022 issue of Hearts Together, a Concordia University Wisconsin and Ann Arbor Special Magazine edition. The fall/winter issue hit mailboxes in early October. View a PDF version of the magazine here. If you are not on our mailing list, but are interested in receiving a free copy, email Jennifer.Hackmann@cuaa.edu.