The last thing in the world John Hinson wants is pity.

In fact, a burn accident that landed him in the Intensive Care Unit three years ago and left him scarred on 67 percent of his body hardly occupies his mind anymore—except when people notice the scars on his arms and legs and ask him about them.

When those moments come, Hinson doesn’t bat an eye.

“It doesn’t bother me,” said Hinson. “I’m 100 percent better. I hope people can look at me and see how far I’ve come and be inspired.”

And the truth is, Hinson has come quite far since his summer 2013 incident during which he attempted to remove from his Phoenix, Arizona, home a pot of grease that had caught fire and instead, inadvertently dumped its contents on himself. 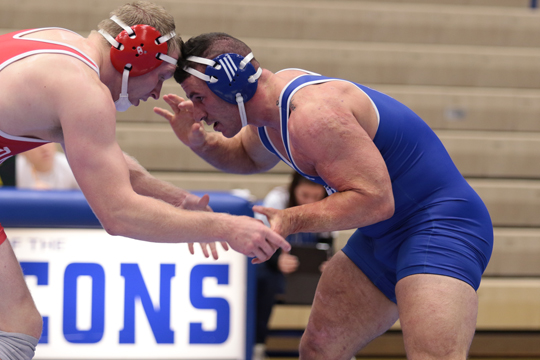 John Hinson takes on MSOE on Nov. 2, 2016. Hinson will graduate in May with his degree in management.

In the days after he came out of his three-week-long, drug-induced coma, doctors told him he’d likely never regain use of his hands or arms.

Less than seven months later—thanks to “a ton” of physical therapy, prayers, support and lots of grit—Hinson had regained full use of his body. He returned to the wrestling mat to compete, as a Falcon, on Saturday, Nov. 8, 2014. He took home a win against Eau Claire.

On May 13, he’ll notch another significant achievement. He’ll join the 1,106 other Class of 2017 graduates to receive his diploma.

The accident set Hinson back just one semester, but instead of graduating in December 2016, he decided to pick up a minor along the way. He’ll graduate with a Bachelor of Science in management and an emphasis in writing.

“A lot of the credit goes to the relationships John built in one short year prior,” said Vangroll. “It was inconvenient and uncomfortable for him to come back so soon, but he did, and I never heard him complain once—and I know it was hard for him.”

For that, Hinson has earned a place of respect in Vangroll’s book.

“John made his own definition of what pain is and what hard work is. In my opinion, he’s one of the most successful athletes ever to come to CUW because of it.” Corey Vangroll, head wrestling coach

“All of our student-athletes develop self-control, diligence, courage, faith, humility, perseverance.… We tend to focus on wins and losses, but for all student-athletes, it is about the journey,” said Vangroll.

“John made his own definition of what pain is and what hard work is,” Vangroll continued. “In my opinion, he’s one of the most successful athletes ever to come to CUW because it.”

Hinson says he hopes he can inspire the same in others.

“I want people to be like, ‘Oh, that’s really cool you did that,’ instead of ‘poor guy,’” Hinson said. “I don’t want sympathy, and if anything, I want to use it to help others in that situation.”