AbleLight student Daniel Stone wasn't afraid to step up to the plate at last night's matchup between the Milwaukee Brewers and the Pittsburgh Pirates.

Stone, who is enrolled in the Concordia-based AbleLight College, was selected to throw out the ceremonial first pitch. AbleLight is a two-year, post-secondary program for individuals with intellectual and physical disabilities. Enrollees live on Concordia’s campus and enjoy many of the perks of the college experience, but participate in a modified curriculum focused on building life skills and helping them to prepare to enter the work force following their graduation.

It was fitting that Stone was selected for the honor since he has been an avid baseball fan since he was young. Growing up, Stone participated in a baseball league reserved for individuals with physical and intellectual disabilities. His father, Kurt Stone, served as his coach for several seasons.

Stone grew up in St. Louis and as such, was raised a Cardinals fan. But since his move to Wisconsin, he’s converted his loyalties to Wisconsin teams, including Concordia’s own Falcons baseball and basketball teams. Stone serves as a manager for the latter.

CBS58’s Frank Healy stopped by Concordia’s campus ahead of last night’s game to speak to Stone and his father.

Click on the image below to watch the segment. 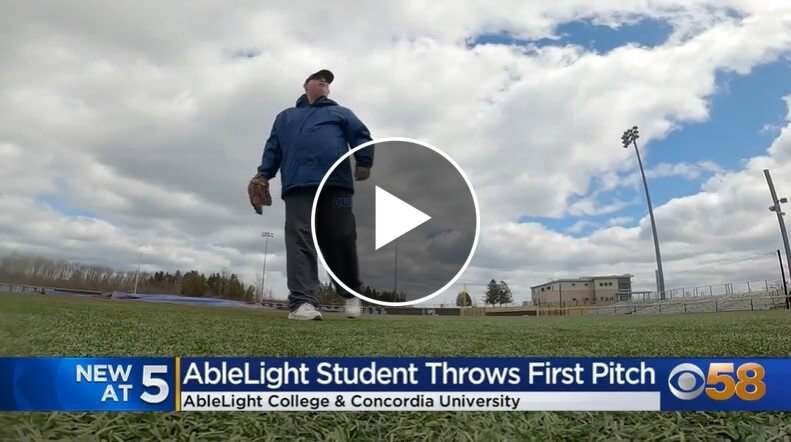