More than a musician. A minister of music.

On Saturday, April 23, at 3:30 p.m., all are invited to gather in CUW’s Chapel of Christ Triumphant for a special organ recital celebrating the career of Dr. James Freese.

After 22 years of teaching, mentoring, ministering, and playing the organ at Concordia University Wisconsin, Jim Freese is calling it a career.

Missing from that description, you may notice, is the word “performing.” That’s because what Freese does, and teaches his parish music students to do, is something different.

Rather, it is worship. It’s ministry. It’s drawing people into closer communion with God through sacred music. More than that, it’s a calling.

A life of service

As a boy at Mt. Calvary Lutheran School in Milwaukee, Freese was inspired by his fifth-grade teacher, organist, and choir director, Mr. Frederick Meier, to become a teacher and church musician. Seven years later, he became part of the final graduating high school class at Concordia College in Milwaukee. From there he went on to Concordia University Chicago to study parish music, earning both a bachelor’s and master’s degree there.

After graduation, he went on to fulfill his dream by accepting a call to return to Mt. Calvary, his old school and his home church, to teach in the day school and be organist and choir director. For 21 years he served happily there, not realizing that God had something more in store for him. When a position opened up at Concordia University Wisconsin in 2000, he followed God’s lead, applied, and accepted the call. At CUW, he has been director of both the undergraduate parish music program and, until recently, the master of church music program. During this time, he also earned a Doctor of Music degree from Northwestern University.

Among his wide ranging duties­—from administration, to teaching, to serving as university organist—it’s the relationships with his students he values most. The time spent working with organ students and teaching hymnody has been especially treasured.

He likens studying hymns to studying the Biblical Psalms, in that understanding context is important. As an example, he cites “Abide with Me” by Henry Francis Lyte, whose mother and father abandoned him when he was a boy. When you begin to understand this background, he explains, the hymns reveal even deeper meaning.

“The parish musicians who graduate here are not only musicians, they’re also theologians,” he says. “That’s why it’s very important that they have a theological background and that they understand the hymns, not only musically, but theologically, as well.”

Four of those students will be returning on April 23 to play in tribute at the retirement recital. Along with their talents, they’re bringing back special memories of their time with Dr. Freese, as well as gratitude for how he influenced them. 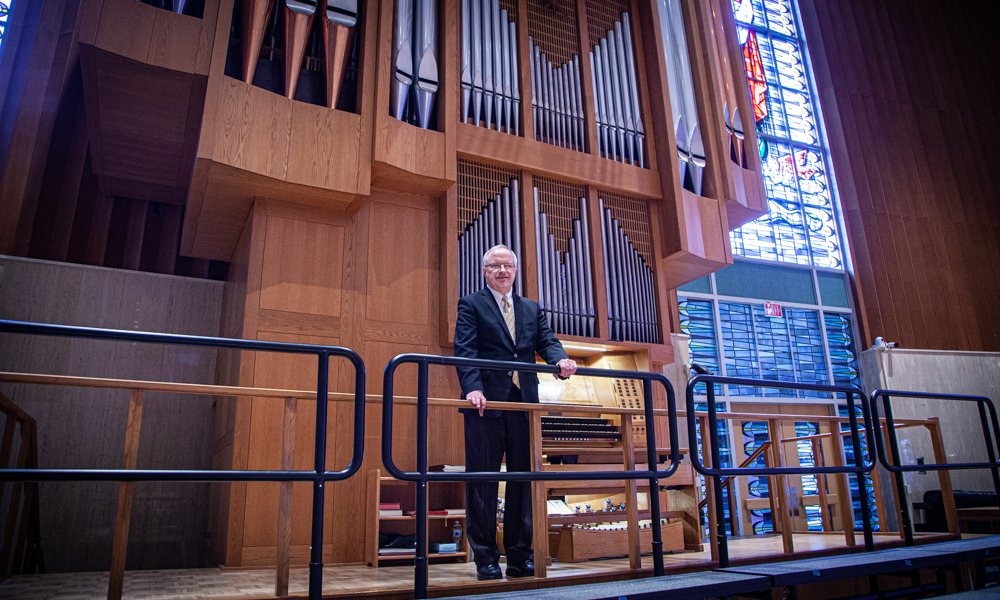 “Dr. Freese was and is an exceptional Christian role model,” says Silas Hasselbrook (’18), a parish music major. “He was one of the professors at CUW who made the university hospitable, engaging, and edifying, one of the professors who embodied and lived its unique, Lutheran, Christ-centered identity. I consider myself blessed to be one of the many students who benefited from his care, insight, and teaching.”

“Dr. Freese is a tremendous gift not only to me, but to the entire CUW community as well as the Church at large,” adds Charlie Russell (’17), who graduated with a double major in history and parish music. “His wisdom, mentorship, and careful instruction have played a huge role in shaping me as a church musician.”

As Freese’s days at Concordia wind down, each class, each lesson, each opportunity to play the organ becomes more precious. One of the difficult things about teaching is how students cycle through; you have such a short time to know them. But then the exciting part, he says, is seeing who they become and what they accomplish after they move on.

Leaving will be hard, but he’s ready to see what God has in store for him in this next season of life. As a former colleague once put it, he’s ready to “go joyfully into retirement.” After all, he points out, “Somebody had to retire for me to have this chance. Now it’s time for somebody else to step into this role in my place.”

There are too many people to thank individually, but two come to mind in particular: former CUWAA president Dr. Patrick Ferry, for giving him the opportunity to do what he loves for 22 years; and retired music professor Dr. John Behnke, whom Freese identifies as an important mentor.

As for what he would like his legacy to be, he points not to accolades or accomplishments, but to something more humble, lasting, and profound.

“I would like to be remembered as someone who expressed his faith through his music and his teaching,” he says, “and hopefully inspired students to do the same through their church music.”

Rest assured, Dr. Freese. By all accounts, that very legacy is secure in the hearts and minds of those you have taught, by word and by deed, to be of service to Christ in the Church and the world.