Believers in Christ know the healing power of God's Word.

The whole of Scripture points to the vital message of Christ’s death and resurrection; a sacrifice that heals us from the stain and sickness of our sins so that, through Him, we can claim eternal life.

Beyond the Gospel message, however, God’s Word also has numerous practical applications for our every day lives.

Concordia’s Christopher W. Cunningham, Ph.D., associate professor of pharmacy, touches on some of the other healing elements (in a more literal sense) identified in the Bible. An expert in natural medicines, Cunningham offers a course on the subject to CUW pharmacy students.

Cunningham also leads research efforts that focus on the design, synthesis, and characterization of analgesics and anti-addition agents. Students who work in the School of Pharmacy’s laboratory are exposed to the drug design and discovery processes, including new synthetic techniques and novel probe development.

Listed below are a few of the Biblical plants (and their medicinal properties) that Cunningham covers in his natural medicines course at CUW. 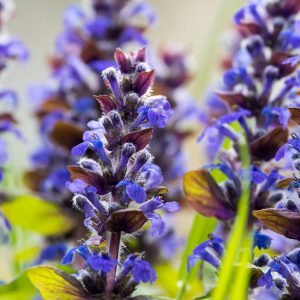 “The priest shall order two live clean birds, cedar wood, crimson stuff, and hyssop to be brought for him who is to be cleansed.” —Leviticus 14:3

The Torah contains certain rituals that were to be followed when an individual was considered to be impure or unclean; this portion of a larger passage describes the purification ritual for dealing with an individual afflicted with leprosy. In Psalm 51:7, David seeks cleansing and purification. What we know as hyssop (Hyssopus officinalis) is a mint of the Lamiaceae family that is known for its essential oil; however, the “hyssop” discussed here was most likely a fellow mint called Organum syriacum, aka “Bible-hyssop,” “Syrian oregano,” or ezov in Modern Hebrew. Like many mints, the essential oil of oregano has a strong sage-like aroma that likely improved the smell of the leper’s home. There is also some possible medical use of syriacum: this essential oil contains thymol and carvacrol, two aromatic phenolics that have demonstrated antiseptic (antibiotic, antifungal) properties in laboratory tests.

Syriacum is one of the common constituents of the za’atar spice blend that is used in cooking. Other constituents of za’atar are thyme, cumin, and coriander, which give the blend a very multifaceted taste. 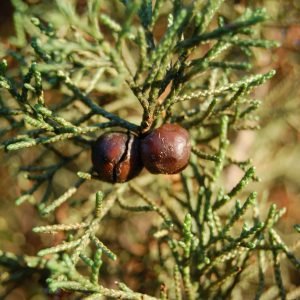 “The priest shall order two live clean birds, cedar wood, crimson stuff, and hyssop to be brought for him who is to be cleansed.” —Leviticus 14:3

Again, this cleansing ritual features a native plant that is used to purify a house from leprosy or the stench of death. The cedar that is most likely present in the Bible is not the same as we would find in, say, Cedarburg, Wisconsin (that would be Thuja occidentalis, the northern white-cedar)! This cedar would likely be Juniperus phoenicea (Phoenician juniper). Both are members of the Cupressaceae (conifer or cypress) family and are known for having a sturdy trunk and root system. Though cedar trees are mentioned frequently in the Bible, they are most frequently referenced for their steadfast constitution rather than their medicinal value. However, cedar essential oil has a purifying aroma to it, and would release a pleasant smell when burned. Thujopsene is a sesquiterpene that seems to have mild antiseptic activity.

Like those of Biblical times, we use cedar wood today in lumber and buildings. Cedar essential oils are also frequently used for their antiseptic properties. 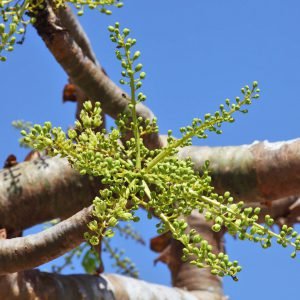 “On coming to the house, they saw the child with his mother Mary, and they bowed down and worshipped him. Then they opened their treasures and presented him with gifts of gold, frankincense, and myrrh.” —Matthew 2:11

This is one of the more recognizable passages; the wise men who presented gifts to the newborn king. Frankincense (and myrrh) are resins extracted from the Boswellia and Commiphora genera, respectively, of the Burseraceae (torchwood) family of trees.

Frankincense derives from the French term for “high-quality incense” (franc = noble). The resin is still used as an incense by Christian and Catholic churches today. One constituent of serrata is called boswellic acid. Boswellic acids are not volatile (meaning, they are not part of the essential oil of frankincense), but they could have therapeutic potential because of their anti-cancer or anti-inflammatory properties. 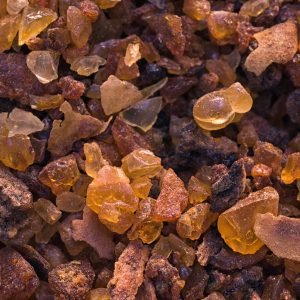 “On coming to the house, they saw the child with his mother Mary, and they bowed down and worshipped him. Then they opened their treasures and presented him with gifts of gold, frankincense, and myrrh.” —Matthew 2:11

Myrrh was a very valuable substance in the Middle East: it was used as a perfume, anointing oil, and in embalming rituals. Myrrh is still used today for its antiseptic and analgesic qualities, typically in oral hygiene in Western cultures. Myrrh is a staple in Traditional Chinese Medicine (TCM) and Ayurveda (traditional medicine in India), also helpful in pain and inflammation disorders. There is evidence that constituents of molmol Engl. can act as painkillers through similar mechanisms as morphine. 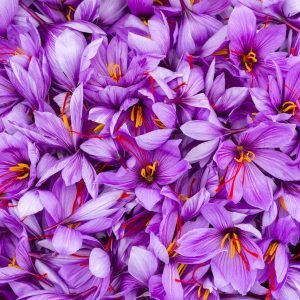 “Your shoots are an orchard of pomegranates with all choicest fruits, henna with nard, nard and saffron, calamus and cinnamon, with all trees of frankincense, myrrh and aloes, with all choice spices–a garden fountain, a well of living water, and flowing streams from Lebanon.” —Song of Solomon 4:13-15

Saffron (Crocus sativus) is a member of the iris family Iridaceae. It has a long history of medicinal and non-medicinal use: Greeks, Romans, and Egyptians used the stigmas to treat bleeding disorders, gastrointestinal upset, and urinary problems, and many cultures coveted the plant as a spice, perfume, and dye. Saffron is a very expensive spice per pound, and being compared to saffron would have been a very high compliment, indeed!

Saffron is still used today in cooking to add a particular aroma and spice to foods, for example paella and bouillabaisse. Some medical evidence suggests saffron is possibly effective for Alzheimer’s disease, depression, and some women’s ailments (menstrual discomfort, premenstrual syndrome). Constituents like safranal are responsible for the aroma of saffron and may contribute to antidepressant effects.

Pharmacy professor has essay published on benefits of parks during pandemic
previous story
Can Financing an Adult Accelerated Degree Be Painless?
next story