The uncommon student-athlete who’s already ahead of the game

Meet Brenden Lewison (’21), a sport and entertainment business major who’s driven to succeed—on and off the court.

Athletes often speak of “drive.” It’s that inner passion that pushes them to train harder, to practice more, and to give all they have for victory. In competition, drive can lead to team championships and personal glory. In life, for one particularly driven CUW student-athlete, uncommon drive has led to graduating in just three years at Concordia—all while playing for the Falcon basketball team and working for the athletic department.

But what is it that drives Brenden Lewison, a “junior” who will be graduating this week with a bachelor’s degree in sport and entertainment business?

“That’s a good question,” he said. “I think it comes down to wanting to be my best for those who are closest to me. That’s what motivates me—academically, professionally, athletically—I want to be the best version of me for all those who are there for me.”

A Foundation of Faith

Lewison has been a part of Lutheran education his whole life. A member of Hales Corners Lutheran Church, he attended Hales Corners Lutheran School from Kindergarten through eighth grade before enrolling at Martin Luther High School. But it wasn’t a certainty that he’d wind up at Concordia for college. It was a basketball connection that led him here.

Patrick Doherty is the boys basketball coach and athletic director at Hales Corners, as well as an assistant basketball coach for the Falcons. That relationship put CUW on Lewison’s radar; when he and his family visited the campus, it sealed the deal. 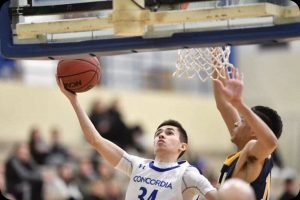 An excellent student, Lewison initially became part of the CUW Business Scholars, an accelerated program leads to a bachelor’s degree in business and a master of business administration (MBA) in just four years. However, when some scheduling issues made that path problematic, he shifted his focus.

“My advisor said, ‘because of the pace you’re on, and because of the AP credits you came in with, you would be able to finish [a bachelor’s degree] in three or three-and-a-half years, if that interests you,’” Lewison explained. “And I was like, ‘Yeah, it definitely does!’ So I decided to go for it.”

It wouldn’t be easy, of course. To finish in three years required taking nearly the maximum amount of credits each semester, plus a few summer classes, plus a winter class … not to mention many hours of basketball practice. And so much homework. And dealing with COVID-19. But the obstacles only added motivation.

“It was definitely a challenge,” he said, “Especially with last spring, going fully virtual. But I think that made it more fun, and more fulfilling, to be able to push through that and still be able to finish in three years. It was awesome.”

As if all that weren’t enough, Lewison has been a student worker for the athletic department since his freshman year. When he first arrived on campus, he didn’t even know there was such a thing. He started working football games as a volunteer, which caught the attention of assistant athletic director and head softball coach Steve Crook. It didn’t take long before he was gainfully employed.

“Brenden has been working for us as a student employee for almost three years and a lead worker for two,” Crook said. “As a student lead for game management in athletics he helps host our home athletic events. He can do it all! He worked 15-plus hours a week and played on the basketball team, while always keeping his academics a priority.” 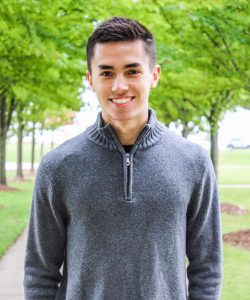 Last summer, his professional demeanor and networking skills helped him land an exciting internship with the Chicago Blackhawks. Ironically, it was an opportunity that might not have been available if not for the COVID-19 shutdown. Working together with a small group of fellow CUW students and recent graduates, Lewison spent the summer brainstorming and planning promotions to bring fans back to Blackhawks games when the shutdown was over.

“Our job was to attract fans who were maybe on the fence about coming back,” Lewison said. “It was all new for them, because the Blackhawks have such a strong fan base they never really had to do promotions before. It was an awesome opportunity and a great learning experience.”

If he had his choice, Lewison said his dream job would be to work for the Milwaukee Bucks—even though working at any level of athletics would suit him just fine. For now, however, he has his gaze fixed firmly on another unique opportunity. This one about 45 miles to the north in tiny Haven, Wisconsin.

Before the 2020 Ryder Cup was postponed due to the pandemic, Lewison was set to be a volunteer at the international golf competition at world-famous Whistling Straits near Sheboygan. When the event was rescheduled for September 2021, Lewison again was planning to volunteer. And yet again, the COVID-19 shutdown worked to his advantage.

When organizers found out he was set to graduate, and that he had so much game management experience, one thing led to another and they offered him a job as an operations assistant. It’s not a permanent position—it will only take him through sometime in October—but what a way to kick start a career in sport management.

“In a couple of weeks, I’ll be going up to Whistling Straits every day to be in operations,” Lewison said. “I’m definitely looking forward to it, because something on that scale, an event that big will be so cool to be at every day. The set-up process, the behind-the-scenes, everything. I’m so excited!”

With all he has going on in his life, and all the demands on his time, Lewison knows it’s especially important to stay focused on the spiritual side of things. He loves attending chapel with his teammates and reminds himself often to trust God. To help with that, he wears a bracelet that reads “I Promise”—as in, “I promise to trust Him and His plan.”

“God has a plan for you, and He knows what’s best,” Lewison said. “To trust that, even when things are stressful, or when it seems like things aren’t going your way, or when things are getting chaotic, that’s something I’ve been constantly reminding myself, especially this year.”

Athletically, he’s a proven winner. Academically, he’s an honor student. Personally, he’s likeable and approachable. Professionally, he’s already ahead of the game. And spiritually—most important of all—he inspires others with his hard work, humility, and servant’s heart.

“He leads by example, by rolling up his sleeves and doing whatever task we need,” Crook said.  “No matter the event or the team that’s playing, every coach knows him and trusts him with the most difficult tasks.

“But where Brenden truly stands out is working with people. He is a great listener and very attentive to the situation as well as the person.  His is the epitome of a CUW Falcon, a great Christian leader who has excelled at everything he’s done these past three years. We will miss him.”

And no matter what comes next, you can be sure he’ll always be driven to be his best. For all the right reasons.

Learn more about the sport and entertainment business major at CUW.