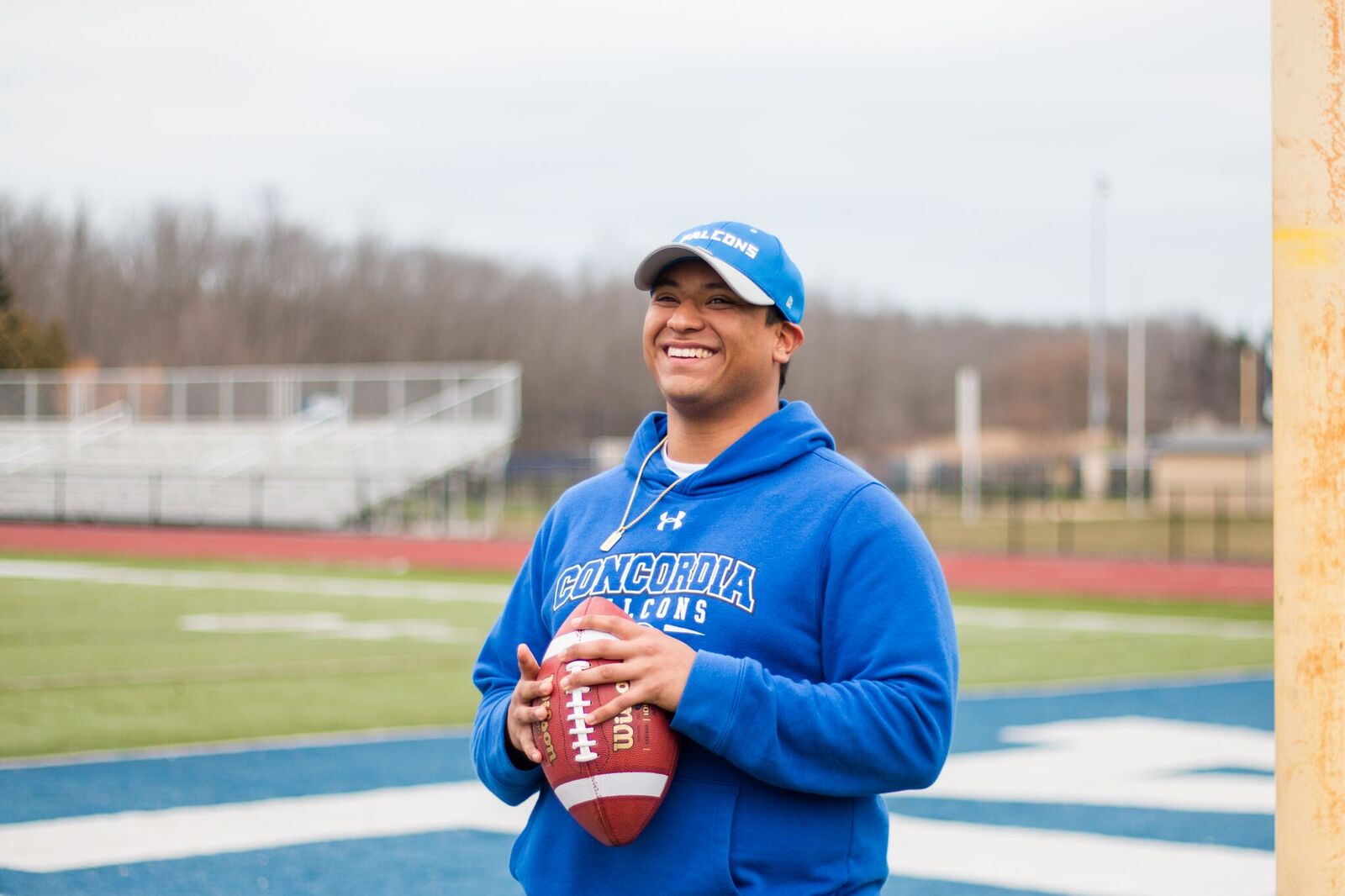 Tony McHale-McFarlin’s 5-foot-1, 145-pound lacrosse-playing younger brother may seem unintimidating at first glance, but he’s known by his opponents as being deceptively scrappy, and he can more than hold his own in a physical skirmish with guys twice his size.

Tony is no slouch either. A freshman player on the Concordia University Wisconsin football team, the 5-foot-9 Tony weighs in at 219 pounds. Prior to his time at CUW, he garnered multiple accolades as a standout player on his high school’s football and lacrosse teams. He and his brother have an ongoing good-natured rivalry to see who will earn the most newspaper write-ups during their athletic careers.

Maybe it’s habitual, maybe it’s instinctual, or maybe it’s just how Tony knows to show his love, but even though his brother no longer needs it Tony is fierce about standing up for him. He aims to do the same one day as a social worker, going to bat for youth who need it most.

“I’m very protective of people I really care about,” Tony says. “Ever since I was little, I had to protect my brother and take care of him, and be that role model to him.”

Unfortunately, Tony had to come to his brother’s defense far too often during their time growing up. The two spent their more formative years in Hyattsville, Maryland, a place Tony describes as “one of the worst parts of America” for its prolific gang activity.

When Tony wasn’t avoiding street violence, he was contending with abuse at home. Tony recalls an incident when he was 8 years old and his brother was 4. He walked into a domestic dispute between his mom and brother’s father where his brother was present, and Tony found himself having to diffuse the dangerous situation.

“That was the first time I got to the point where I thought, ‘I have to be the man in the family,’” Tony said. “We didn’t have a father figure growing up. I was the father figure.”

Despite living in an abusive home and being surrounded by teen pregnancies, high school dropouts, mental illness, and drug abuse, Tony beat the odds to become the first member of his family to attend college.

Now Tony wants to make a career out of helping others in his situation overcome what they were born into. He’s majoring in social work and minoring in entrepreneurship at Concordia, and he has aspirations to open a homeless shelter someday. His goal is to help kids like him find homes (Tony was adopted into a loving, stable family at the age of 10) and take advantage of the opportunities they’ve been given.

“God has a plan for me to do something for others,” Tony says. “I want to go into adoption and foster care, and work with little kids. A lot of kids think that once they’re away from their birth parents everything falls apart, but it can be like a second chance.”

He’s gotten to where he is with a lot of help—from his adoptive parents and from professors, teammates, coaches, and tutors at Concordia. He’s also had to rely on his own grit and determination.

I’m very protective of people I really care about. I don’t want kids to go through that stage of thinking they have a hopeless life. God has a plan for me to do something for others.

And he’s already finding ways to give back at CUW. Even though Tony is nowhere near the biggest player on the football team, he’s managed to gain the respect of his teammates. He’s fondly viewed as the “dad” on his floor because he’s the one to drive his teammates around or keep them in line when they’re making bad decisions.

“A lot of them tell me that I’m an inspiration because they know what I came out of,” Tony says. “I just call myself someone who is trying to live my life.”

“I don’t want kids to go through that stage of thinking they have a hopeless life,” Tony says. “I can’t really cover up what I went through, but I can tell them that with hard work and dedication you can do what you want to. Don’t let second chances go to waste.”