Among the 73 individuals who earned their Doctor of Pharmacy degrees on Friday, May 13, was a tight-knit group of four from Mexico and Puerto Rico who navigated their way through the rigors of pharmacy school in their non-native language.

Not only is their academic accomplishment a feat, the group will add to a highly underrepresented (and highly needed) population of professionals within the pharmacy community.

It is estimated that by 2042, one out of four people in the U.S. will be Hispanic. Yet, the number of Hispanic or Spanish-speaking pharmacists in this country is estimated at just 4.5% of the 342,000 currently employed pharmacists.

Concordia is one of only a dozen pharmacy schools in the nation to have a student chapter of the National Hispanic Pharmacists Association (NHPA). The four graduates held leadership positions on Concordia’s student chapter board.

CBS’s Telemundo Wisconsin station stopped by at commencement to speak to the graduates and learn more about their future careers.

Click here or on the image below to view the segment in Spanish. 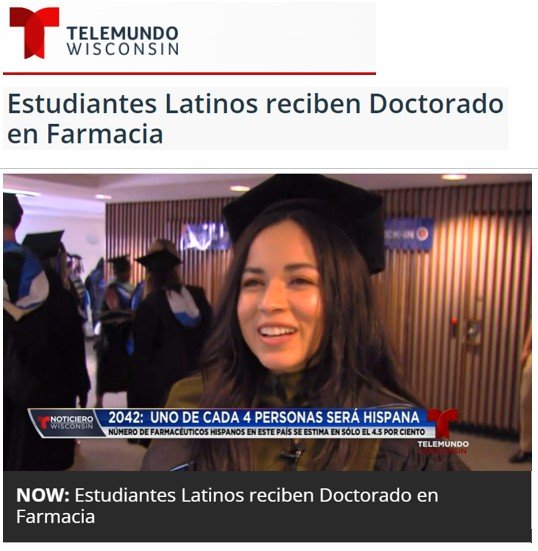