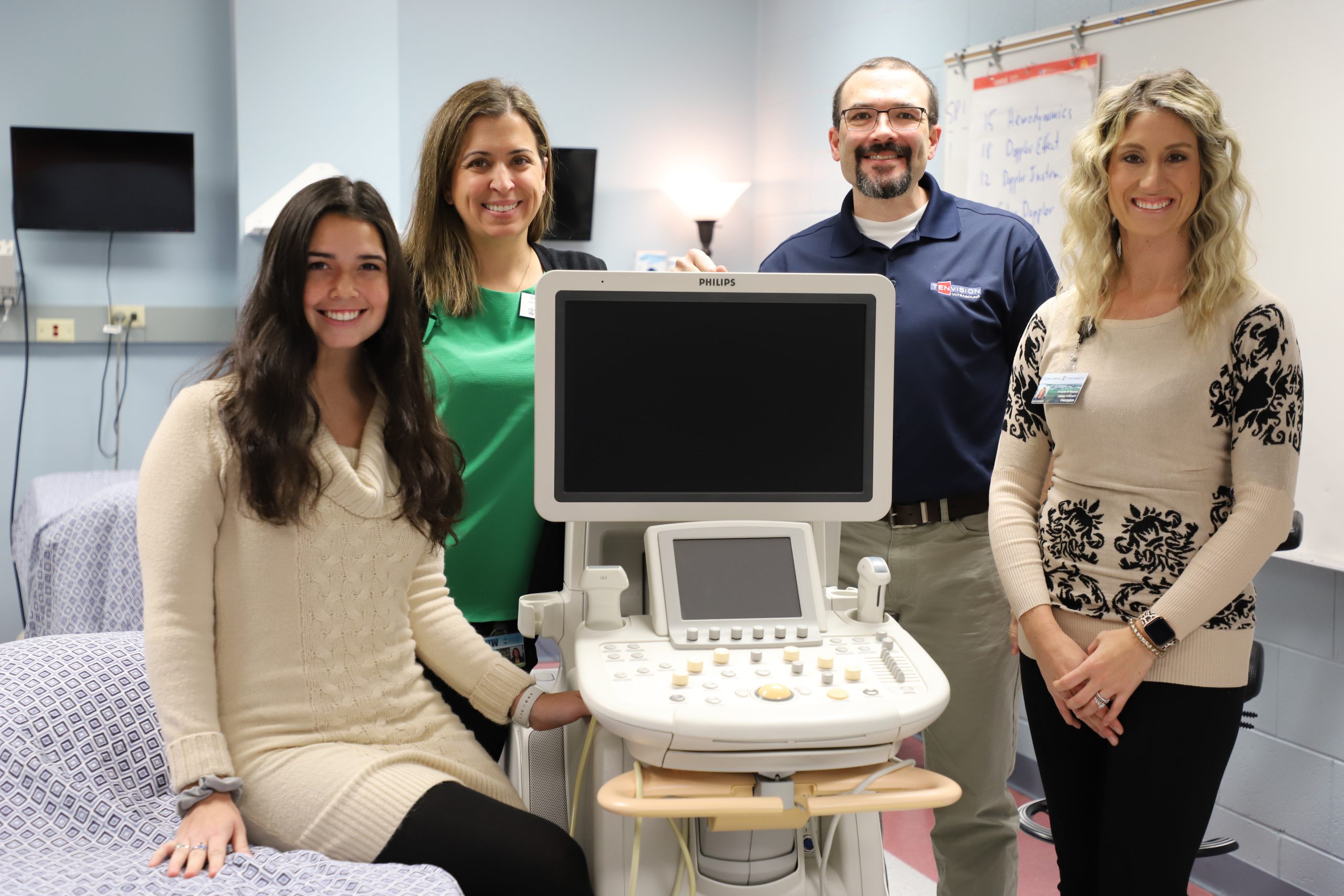 Editor’s note: The Tenvision Ultrasound was donated to Concordia after our sonography students entered a contest that Concordians helped us win. This story has been updated from the original post in October.

Before they cross the commencement stage this May, six Concordia students have left a legacy that will impact the future of CUW’s sonography program in a big way for years to come.

Senior sonography students Hope Rehlinger, Deb Gibbs, Haley Jorgensen, Bridget Ebert, Anna Depies, and Claire Neumayer took it upon themselves to enter a Facebook contest to win an ultrasound machine on behalf of the university. The ultrasound machine is estimated to cost upwards of $30,000.

Put on by Tenvision Ultrasound, the contest invited sonography programs nationwide to submit a photo that demonstrates their need for an upgraded machine. At the end of a two-week period, Concordia had the most “likes” to win.

Below is the image of the post on Tenvision Ultrasound’s Facebook page that helped Concordia win an ultrasound machine.

Concordia is the only program in Wisconsin that was in consideration for one of the “Cadillacs” of ultrasound machines.

“Just like cars, there are different levels of ultrasound machines,” said Program Director Lisa Reimer, MS, RDMS, RVT, RT(R). “Concordia currently has three ultrasound machines on campus, but the one that TenVision is giving away would be comparable to like a luxury brand vehicle. As we look to grow our relatively young program, it’s really vital that we not only have more equipment and resources for students, but that we have a selection of technology to prepare them for a variety of workplace environments.”

Concordia acquired its sonography program from Wheaton Franciscan Healthcare in 2016. Like many other medical systems nationwide, Wheaton Franciscan had run a hospital-based diagnostic program for several years, admitting students from undergraduate programs throughout the Greater Milwaukee area, but decided ultimately to cut the program due to the cost incurred to run it.

Concordia’s Miller Park Way Center picked up the program initially, and just this year, faculty moved to Concordia’s main Mequon campus in order to provide more accessible hours for students and more opportunity for interprofessional education with the university’s 30-plus other healthcare programs. Along with Reimer, Amanda Stippich, BS, RDMS, RVT, serves full-time with Concordia’s program as clinical coordinator and instructor.

Designed as a four-year program, Concordia’s Bachelor of Science in Medical Diagnostic Sonography is helping to meet a growing workforce need. According to the Bureau of Labor Statistics, projected job growth for sonographers is 17 percent (much faster than average) between 2016-2026.

Concordia’s young program boasts a 100-percent program completion rate, with 100 percent of graduates having successfully obtained credentialing within one year. The CUW program has also achieved a 100-percent job placement rate within six months of graduation.

Beyond the market demand, sonography supports the university’s mission to help students “develop in mind, body, and spirit for service to Christ in the Church and the world.” Concordia has invested heavily in this mission over the years by bolstering healthcare options for students. Half of Concordia’s six academic schools house the university’s more than 30 healthcare program options. These offerings are complimented by the strong Liberal Arts Core provided by Concordia’s School of Arts and Sciences. Small class sizes in a Christian setting enrich the learning and help students to become holistically prepared to serve others in the world.

The combination has proven to be an ideal fit for this year’s senior students, who cited things like Concordia’s Christian foundation and excellent professors as reasons they were drawn to CUW.

“For us, it’ll be rewarding to know that we helped Concordia get a new piece of technology,” said Deb Gibbs. “It’s helping the future of sonography.”