It was July 1, 1997, and Patrick Ferry was on the cusp of a monumental period of change in his life when he decided it was time to start keeping a journal.

Ferry was professor of history at Concordia University Wisconsin at the time, seeking the Lord’s next calling in his life. 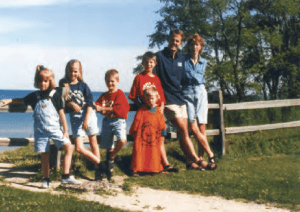 He was young, earnest, and humbled by the possibility that he could succeed R. John Buuck as president of the university with aptitude, vision, steadfastness, and fervent attention paid to the Gospel mission.

If not president, then he would become vice president of academics at Concordia University Texas. He had already accepted the position, contingent on being elected president. His bags were literally and, to some degree, figuratively packed for the South, as Ferry famously likes to tell. Of the five serious candidates in consideration for the presidency, Ferry by far had the least leadership experience.

His first journal entry details his reflections as he awaited the electors’ decision:

“Today is the last chapter of one part of our life, and tomorrow begins a new one. By noon tomorrow I will know better if I am elected to be Concordia University’s next president, or whether I will become Vice President of Academics at Concordia Austin. My feeling is that another will be chosen, though there is no clear choice. … Surely the Lord knows if I have put forth the right vision and if I am the right person.”

The next day, “the underdog” was elected the 10th president of Concordia University Wisconsin, and two decades later the university is looking back on the tremendous season of growth it has experienced under his leadership. 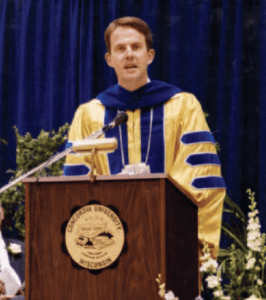 The conclusion of the 2016-17 academic year marks 20 years with Rev. Patrick T. Ferry, Ph.D. at the helm of Concordia University Wisconsin, four of them with the Ann Arbor campus also under his charge.

As the third longest-running president of CUW, Ferry has propelled the university through a number of significant changes: the remodel of CUW’s bluff, the merge with the Ann Arbor campus, the acquisition of the North Building, and a 74 percent increase in total student enrollment from his first academic year to now, to name a few.

All the while he’s kept a near-daily journaling routine, recording his innermost thoughts and reflections on faith, his family, and Concordia’s greatest triumphs and struggles.

The routine is therapeutic for Ferry. Oftentimes, putting pen to paper turns into a sort of private prayer practice, he says.

Perhaps it’s the history professor in him, but Concordia’s president loves a good story, and sometimes his journals are the sounding board for his public addresses. Seldom does a sermon, letter, or speech go by without a memorable anecdote in its midst—often told with his head cocked slightly to the side and his trademark bowtie in place.

“There’s something about the narrative approach,” says Ferry. “Sometimes you can get caught up in metrics, but in the end we live our lives in kind of a narrative framework.”

But it’s not all talk where Ferry is concerned. His friends, colleagues, and employees know that his ability to seek out feedback, and his capacity for genuine care and concern are equally extraordinary.

One longtime colleague described his observations of the president during the countless meetings they sat in together: “Sometimes these discussions get heated. President Ferry doesn’t participate much in that, but he listens, and you can see the wheels turning. And then, at the end of the meeting he’s able to say, ‘Okay, here’s what we’re going to do.’” 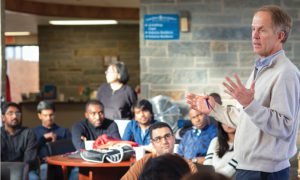 In other words, Ferry listens, synthesizes, and comes to a decision and then is able to compellingly translate what’s important for the university to those who need to hear it. And always at the top of his list of most vital messages is Christ’s crucifixion and resurrection for us all.

When Ferry reflects on his first days as president of CUW, and more recently of CUAA, he notes that much has changed. However, one thing is sure, he says—any success that is to be attributed to his time at Concordia University is the result of the Lord at work in him for the sake of His Kingdom.

“My confidence rests in God’s will being done, and that He knows Concordia’s needs better than I do.”

Editor’s Note: Concordia’s Storyteller was first written by the Strategic Communications Team for the 2017 Spring/Summer Concordian Magazine. At the conclusion of the 2016–17 academic year, so, too, did Rev. Dr. Patrick T. Ferry’s complete his 20th year at the helm of Concordia University Wisconsin, and fourth as president of Concordia University Ann Arbor. We chose to mark this milestone by having the magazine’s president’s address come from the person who knows him best. 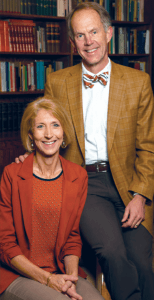 Words cannot express my feelings as I write this letter, but I’ll try anyway. Deeply grateful. Incredibly honored. Proud yet humbled. Blessed by the privilege to serve as the president’s wife as we prepare the next generation for service to Christ in the Church and the world! I feel all of this because of you. The support, encouragement, and love you have given Pat and me over the past four years (two decades at CUW) has sustained, uplifted, and inspired us. From the bottom of our hearts, we thank you.

Words cannot express how we felt 20 years ago, July 2, 1997, when we received the call that Pat was chosen to be president of CUW. I’ll try anyway. Shocked. Scared. Numb. Excited. At 38 years old, with no administrative experience he was an underdog. As the presidential election process winnowed, we were geared up for a cross-country move to Texas, where Pat had already accepted a new position. Our house was sold! Needless to say, that phone call put into motion a whirlwind of unexpected change that, frankly, we had no idea how to handle. We could only trust in God’s plan for our lives and how He would use Pat’s leadership role to fulfill His purpose.

Words cannot express how proud I am of Pat, but, again, I’ll try anyway. Over the years, I’ve watched him solve complex problems and sticky situations with great integrity and strength. I’ve witnessed his tenacity, humility, and patience. He is steadfast, disciplined, and visionary. His faith is active in love! One cannot count the number of times Pat has encouraged, comforted, and inspired others through the Gospel message. He is a loving and devoted husband, father, and grandpa. Our family is his highest priority, and we feel it every day. He is our rock. He is our friend. My words fall short of adequately describing our journey at Concordia, but that’s okay because all that matters is God’s Word. His Word is the foundation upon which Concordia is built, and our mission is grounded in Scripture. Over the course of the next 20 years, presidents (and spouses) will come and go, but God’s Word will remain. God’s Word, made flesh in Jesus Christ, is the heart and soul of everything we do!